Robot Builds Another Robot Out Of Sprayable Foam 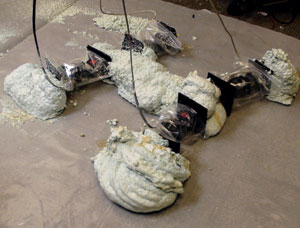 Although robots can be designed for absurdly specific tasks and carry out those tasks with ridiculous efficiency, one downside about using a robot to solve a problem is that you have to design and build that robot ahead of time. Yeah, a snake-like robot might be really good for climbing rocks, but you need to know about those rocks ahead of time, so you can design, build, and bring that robot with you. In situations like space exploration, that’s kind of an issue.

The Foambot, a creation of Shai Revzen and his team at University of Pennsylvania, provides a unique solution to this problem: A robot that can be built on the spot out of mechanical joints and sprayable foam. The Foambot has two basic parts, a wheeled “mothership” module that carries around the foam and has the sprayer, and a collection of joints which are used to power the Foambot proper that the mothership module sprays.

When it’s go time, the joints are arranged in whatever position is needed and the mothership goes around spraying a foam framework between them. The foam is stored in the mothership as a series of chemicals and doesn’t actually turn into foam until contact, at which point it turns into hard urethane foam. After that’s done, the software analyzes what the joints have been foamed into and figures out what they’ll have to do to move. Kind of like the Spore creature animator, I imagine.

Granted, the things don’t look pretty, but they do solve a complex, if uncommon, problem. It also helps that Foambots can not only be made specifically to tackle one problem on the spot, but they can also return to the mothership for modification so they can tackle a new one. It’ll probably be a while before something like this makes it to, say, Mars, but once it does, there’ll be no stopping it.