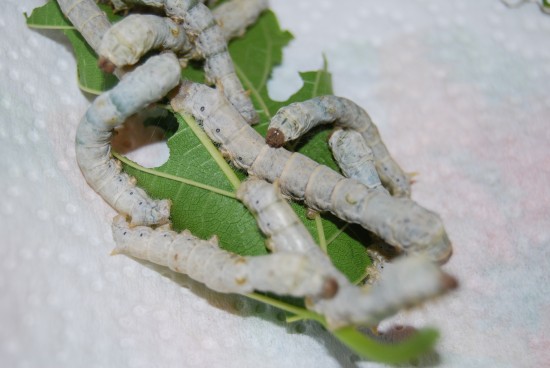 Your initial question might be something along the lines of why anyone would want horrible little worms producing the butt-threads of horrible eight-legged hell beasts. The answer is simple: Industry. Threads of spider silk have long been known to have amazing, properties, as Gizmag relates:

It has a tensile strength similar to that of high-grade steel while only being one-fifth as dense, it can stretch up to 1.4 times its relaxed length without breaking, and it can maintain those properties down to a temperature of -40C (-40F).

In large enough quantities, the silk of spiders could be used to repair human ligaments and produce bulletproof vests. Spiders are, however, harder to work with than their cousins the silkworms. For one thing, spiders have a tendency to eat each other in captivity, and are generally difficult to manage in large numbers. Hence, the need to create silkworms that carry the silk-making genetics of spiders.

Two companies, Sigma Life Science and Kraig Biocraft Laboratories, began their work by inserting random spider genes into the silkworms. They claim that through this method they’ve produced threads far stronger than silkworm silk, though not yet as strong as true spider silk. Bolstered by their success, the companies plan to continue their work with more targeted genetic modifications, hoping to get pure spider silk.

The idea behind the genetically modified silkworms isn’t all that new. Goats with spider genes produced milk that contained high concentrations of silk proteins, which could in turn be crafted into super-strong materials. If Spidersilkworms are too horrific a concept, than perhaps Spidergoat will rest a little easier on your mind.