Does This 'Spider-Man: Homecoming' Easter Egg Reveal a Big Plot Point About Thor in 'Infinity War'? | The Mary Sue

Does This Spider-Man: Homecoming Easter Egg Reveal a Big Plot Point About Thor in Infinity War? 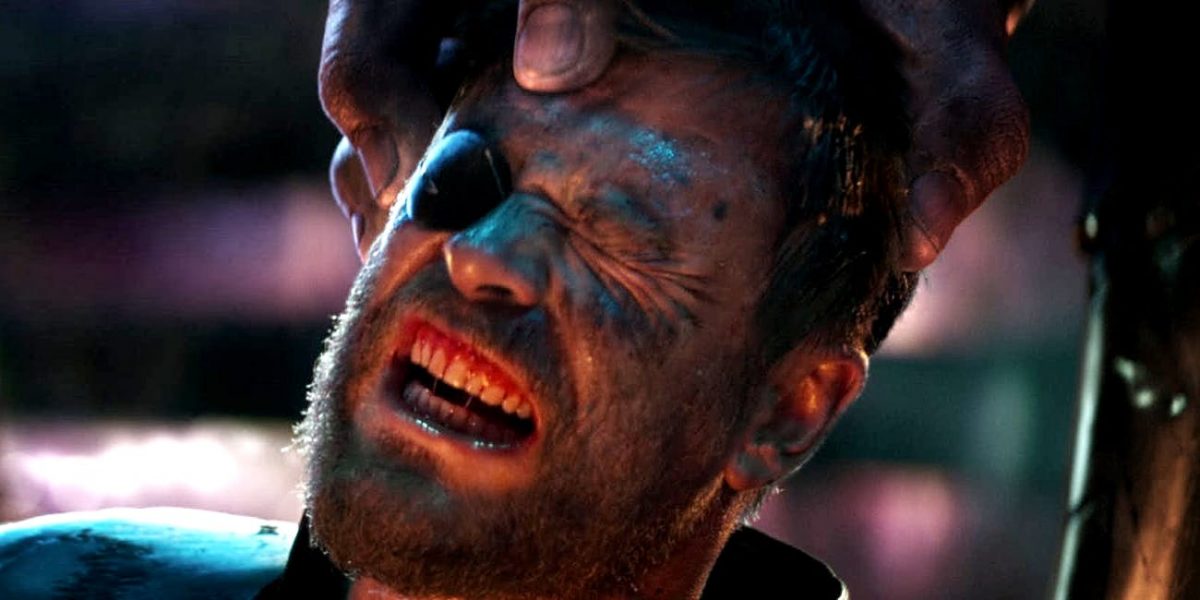 Thanks to director Joe Russo’s interview last week, we already know that Thor’s going to have one of the biggest arcs in Marvel’s upcoming upend-the-toybox-and-make-all-the-action-figures-fight Infinity War. Did this sneaky Spider-Man: Homecoming Easter egg already tell us how Thor could help defeat Thanos?

In the post-Ultron period, Thor was the only Avenger doing, y’know, his job by looking for the Infinity Stones, rather than getting into fights in airport parking lots and arming child soldiers. He’s coming into Infinity War as a renewed fan favorite, having just starred in Thor: Ragnarok, easily one of the top three films of the entire Marvel franchise. (Fight me on this.)

It makes sense that he’d have a significant part to play this time around. Still, Thor was always something of an afterthought in the first two Avengers films, mostly there to antagonize his brother and wear super soft sweaters. Even Russo admitted that Thor “hasn’t been at the forefront of other Avengers movies.”

So what’s so special about Thor’s character in Infinity War?

For one thing, he’s got a new weapon. Studio concept art and the various toys released by Hasbro and Funko Pop show Thor with a brand-new axe to replace his hammer Mjolnir, which his sister destroyed in Ragnarok. Marketing materials have since identified the axe as Stormbreaker, a weapon with a comics history of its own.

Originally wielded by a Thor comics character named Beta Ray Bill in the ’80s, Stormbreaker is a dwarf-forged weapon that Odin imbued with magical powers after Bill beat Thor in battle. (Like everything in the comics, it’s a long story.) Thor’s new Stormbreaker is likely a combination of several different mythic weapons found in Marvel canon. 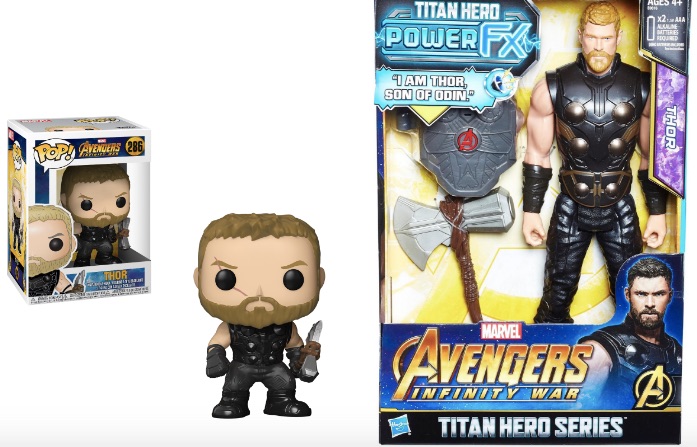 In the latest Infinity War trailer, we briefly see Thor using his newfound lightning power somewhere in space, with Groot and Rocket Raccoon.

Fans (and that LEGO set) think that the three of them travel to Nidavellir, the realm of the dwarves, to have Stormbreaker made. (The handle of Stormbreaker even suspiciously resembles Groot’s wood, which likely means Thor has succeeded in bonding with the grumpy teenage Groot.) 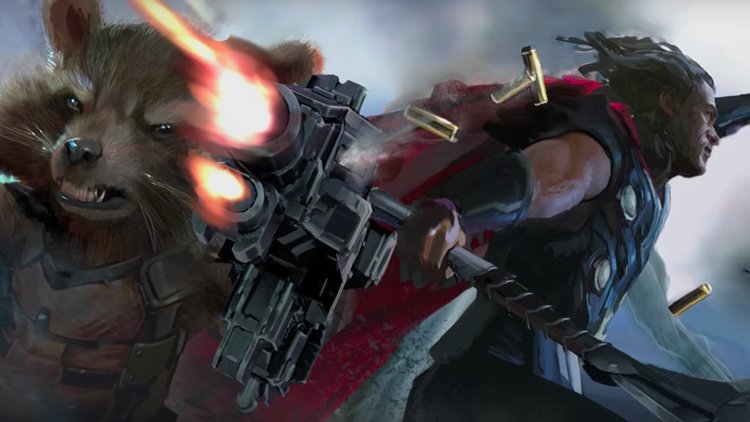 But if we’re using comics canon to help foreshadow Thor’s role in Infinity War, there’s another item of power that could be even more important: Megingjord, the Enchanted Belt of Strength.

Drawn from Norse mythology (“megingjörð” literally translates to “Power Belt” in Old Norse), Megingjord doubles Thor’s strength. Its appearance has varied over the years, from a simple leather sash, to a gold prizefighter’s belt, to more of an over-the-shoulder crossbody studded look.

Granted, Megingjord has only made a few dozen appearances in the fifty years of Thor comics. But when it does show up, it’s always to help Thor defeat his most powerful foes … including frigging Thanos: 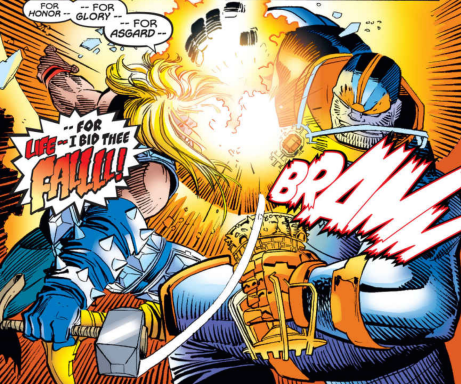 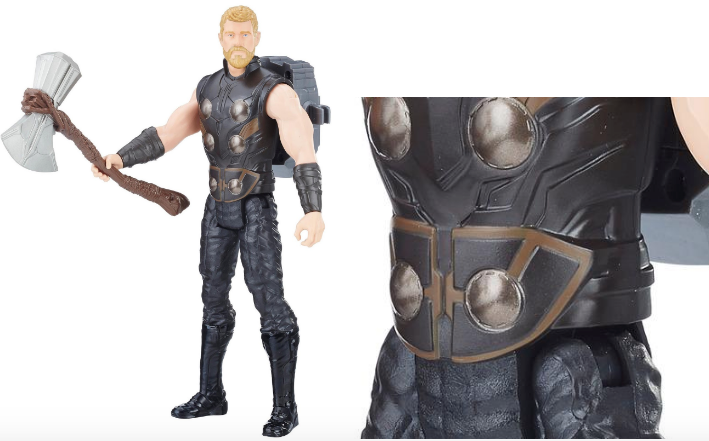 That sure looks like a belt to me! Contrast it to the other Hasbro figure from Infinity War, which seems to represent a Thor earlier in the movie (wielding Heimdall’s sword instead of Stormbreaker, only one eye). No belt. 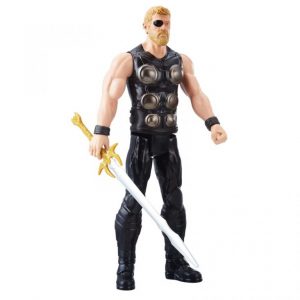 The best part is, we know that this relatively obscure bit of Asgardian swag exists in the Marvel Cinematic Universe, thanks to a throwaway comment by Happy Hogan in Spider-man: Homecoming.

Loading up the Quinjet on Moving Day, when Happy lists the items that still have to be transported to the new Avengers compound upstate, he names Thor’s belt alongside the Hulkbuster armor and a prototype for Cap’s new shield. Happy mangles trying to pronounce “Megingjord,” before giving up and calling it “Thor’s magic belt.”

This could have just been a winking nod to comics fans, but it feels pretty big getting named like that—especially considering the Megingjord hasn’t appeared in the MCU before. Suddenly Thor has a magic belt in the mix, mentioned in the same breath as other objects that will figure into Infinity War.

Based on the Infinity War trailers, we already know that Tony’s Hulkbuster armor shows up in the film. We also know Cap’s getting a new shield, although it’s much more likely to be Wakandan design than StarkTech. And we know from Entertainment Weekly‘s set visit that Thor makes it back to Earth eventually, where he might grab that accessory Tony’s been keeping safe for him.

Given all that, as well as Thor’s major role in Infinity War, who’s to say “The Meging- the meg- the m- Thor’s magic belt” won’t be the secret weapon the Avengers and their allies need to finally take down Thanos?

I guess that would finally make Thor … the strongest Avenger.

In all seriousness, considering that Thor is quite likely going to witness the slaughter of his people (and maybe his brother) at Thanos’ hands, it would be fitting if Thor got to deliver a final, decisive blow—for Asgard.

Lauren Henry is a writer and a PhD candidate in Modern French history focusing on colonialism, migration and identity formation. Ask her about France or soccer.