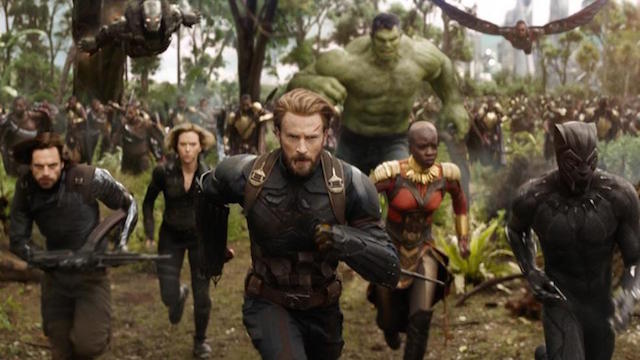 Descriptions for six LEGO Marvel Super Heroes 2018 Avengers: Infinity War sets—translated from Russian—may provide some big hints at the action and activities of our assembled heroes.

io9 points out that Brickshow has the translated descriptions initially posted by the website The Brick Fan, where LEGO has already requested (and received) the removal of those descriptions. “It seems the brick police have already arrived,” Brickshow writes.

Luckily, nothing on the Internet is truly gone forever (except my Geocities fan pages from when I was 12), and the descriptions I read told me more about what may be happening in Infinity War than anything else I’ve seen from Marvel’s notoriously Fort Knox-esque information pipeline. Allow me to interpret these descriptions for you.

As always, take any spoilers and rumors with so many grains of salt that you might as well carry a salt shaker. Another thing to keep in mind is that the product descriptions are translated from Russian, so that much of the language is rendered awkwardly and some details could be totally lost in translation. But the LEGO sets described here align with many of the Infinity War big story beats we’ve seen teased already, and they appear to give us a shape of things to come beyond the trailer.

Do not read any further if you wish to remain spoiler-free!

You can read the entire set descriptions on Brickshow, but here are my biggest takeaways:

– One set that features Thor, Rocket, and Groot LEGO minifigures is themed after a search for Thor’s weapon—presumably, some new kind of weapon that Thor is seeking after the destruction of his hammer Mjolnir in Thor: Ragnarok. The translation says that they’re looking for the “ax-thunderer,” which is likely called something else but is probably ax-shaped! It also mentions that the team is headed to Nidavellir. In comics canon, Nidavellir is one of the Nine Worlds, and it is inhabited by Dwarves who forge fantastic weapons—their work in the past included Mjolnir, Odin’s spear Gungnir, and Stormbreaker. Stormbreaker is a weapon originally shaped to be a hammer similar to Mjolnir, but over various comics incarnations, it has been depicted as an ax. Could this be the “ax-thunderer” weapon Thor is seeking?

– In another LEGO set that’s dedicated to an attack by villain Corvus Glaive, Thanos’ right-hand man and a member of the Black Order, the minifigures included besides Glaive are Black Panther, Shuri, Vision, and the Mind Stone. This is potentially a really massive spoiler, with the translated text saying that part of the play here is that you, the LEGO user, should help Shur to remove the Mind Stone from Vision’s head. Shuri is Black Panther’s tech genius sister, and the implication here is that she is potentially crucial in finding a way to separate Vision from the Mind Stone that powers him without resulting in Vision’s death. Many of us have assumed that Vision would be an obvious casualty of Thanos’ quest for the Infinity Stones, but this description suggests otherwise. Of course, we have no way of knowing if this describes an actual Infinity War scenario or how it plays out, but it’s specific enough to intrigue and make me excited that the movie may be giving Shuri an important role to play.

– The description around a Hulkbuster fight is pretty unclear, but the figures included are Proxima Midnight (a child of Thanos, Corvus Glaive’s wife and another baddie), Bruce Banner/Hulk, Falcon, and the Soul Stone. (If this fight includes the Hulkbuster armor, do we assume Tony Stark is in there too?) The set describes a battle that involves a “shooting tower” and a “six-armed enemy,” (Outrider?) and the suggestion that Falcon may dive in to snatch away that mysterious Soul Stone, which would appear to be somewhere on Earth.

– Another LEGO set with the description of a battle of the Sanctum Sanctorum features minifigs of Cull Obsidian, Ebony Maw, Iron Man, Doctor Strange and Spider-Man, and would seem to focus around the fight to retrieve the Time Stone, currently worn around Doctor Strange’s neck. Most intriguing here is the suggestion that Peter Parker swings in to join the melee in some capacity (New York-based superheroes, assemble!). It also implies that the team sent for the Time Stone includes Cull Obsidian (a hugely powerful child of Thanos) and Ebony Maw, a manipulative bad guy who possesses a power of persuasion so powerful even Doctor Strange has fallen victim to his abilities before. But my favorite line from the description instructs the LEGO user to order pizza and celebrate with Peter after successfully defeating the enemy. Really hoping they include some LEGO New York pizza accessories with this one.

– A set that definitely matches up with what we’ve seen in the Infinity War trailer focuses around the minifigures of Captain America, Black Widow, Outriders, and the Space Stone, with the mission of protecting Wakanda and retrieving the “cosmic stone.” Outriders are a terrifying, six-armed, genetically engineered race with no free will that mindlessly serve until they die. The trailer showed a team comprised of Cap, Black Widow, The Winter Soldier, Hulk, Black Panther, and Okoye (the head of the Dora Milaje) in Wakanda taking on the Outriders. The LEGO description also zooms in on Black Widow and what’s translated as her “truncheons,” which would match up with the badass staff weapon we’ve seen Natasha carrying in some promotions. What intrigues me most about this description is the implication that the Space Stone has by now somehow made it from Loki’s possession on the Asgardian refugee ship all the way to Wakanda.

– I’m not going to touch the description that purports to be about a final battle—that’s too many potential spoilers, even for me, but you can read it for yourself over at Brickshow.

As commenter DJ Bricks on the Eurobricks forum points out, “The major characters that seem to be missing are Loki, Hawkeye, Scarlet Witch, Bucky, Wong, Nebula, Drax, Mantis and War Machine.” Brickshow suggests that there may still be two more LEGO sets forthcoming that we didn’t see the descriptions of, but it’s also possible these other characters aren’t included for Big Story Reasons or just because only the major players are included in each set, which is pretty standard.

As I said above, it’s impossible for us to know a) the legitimacy and accuracy of the product descriptions b) whether these LEGO-ified versions of the movie even correspond to the real details of that scene. But the hints provided here are pretty damn tantalizing, and I feel like I’ve learned more about the possibilities of Infinity War plot points than I have from anywhere else.

If these are correct, we now know roughly who is going after which Stone, which Avengers will be trying to keep it from Thanos’ grasp, and some of the superhero team-ups. I hope that the heavily mixed Team Cap/Team Iron Man combinations mean that Infinity War pushes Civil War from the Avengers’ minds pretty damn quickly.