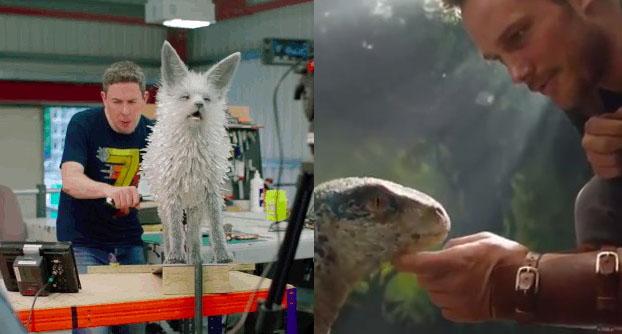 When Star Wars: The Force Awakens was in production, much was made of the movie’s commitment to honor the feel of the originals by using practical effects and puppetry when possible. There was still plenty of CGI, but the added touch of actually building something like BB-8 went a long way towards generating the right feel for the movie. The Last Jedi is set to do the same thing with some new additions, and it’s not the only movie showing off some impressive visual effects.

But here, first check out this video that details how the “vulptex,” the “crystal fox” from the Last Jedi trailer, came to life:

Of course, not every scene with the vulptex (Vulptexes? Are we doing same-word plural for this one, or what?) is practical to do with puppetry, and they digitized the physical models to make those happen, but did you catch the animatronic movements? Here, this is what I’m talking about:

How in the Hell? And how dare they call the CGI scan the “perfect version”? (OK, OK, that’s probably not what they meant, but still.) I just want to pet it and play with it and snuggle with its probably-too-pokey self forever. It’s better than porgs (fight me), and it’s a physical things that exists in the world. That’s amazing, and totally worth the extra effort on top of just doing a CGI creature. There’s definitely a place for both technologies in modern movies, and I only wish more of them would make room for them.

Which brings me to the Jurassic World sequel. Jurassic Park was a visual effects spectacle for its time that still holds up relatively well today (much like Star Wars), especially in how it blended CGI with animatronic dinosaurs. Today, debate is raging in a Twitter thread of new Jurassic World: Fallen Kingdom footage posted by Colin Trevorrow, in which Chris Pratt lets a baby velociraptor snuggle his finger. Take a look:

There’s a lot of talk about how it could easily pass for animatronics, as well as speculation that its some blending of animatronics and CGI. Or maybe it’s entirely CGI, which would be pretty impressive on its own when people are having trouble telling the difference (although, admittedly, Twitter video compression would probably cover some CGI flaws).

It’s great to see both of these franchises continuing to push movie magic forward. We all need a bit of wonder in our lives right now.