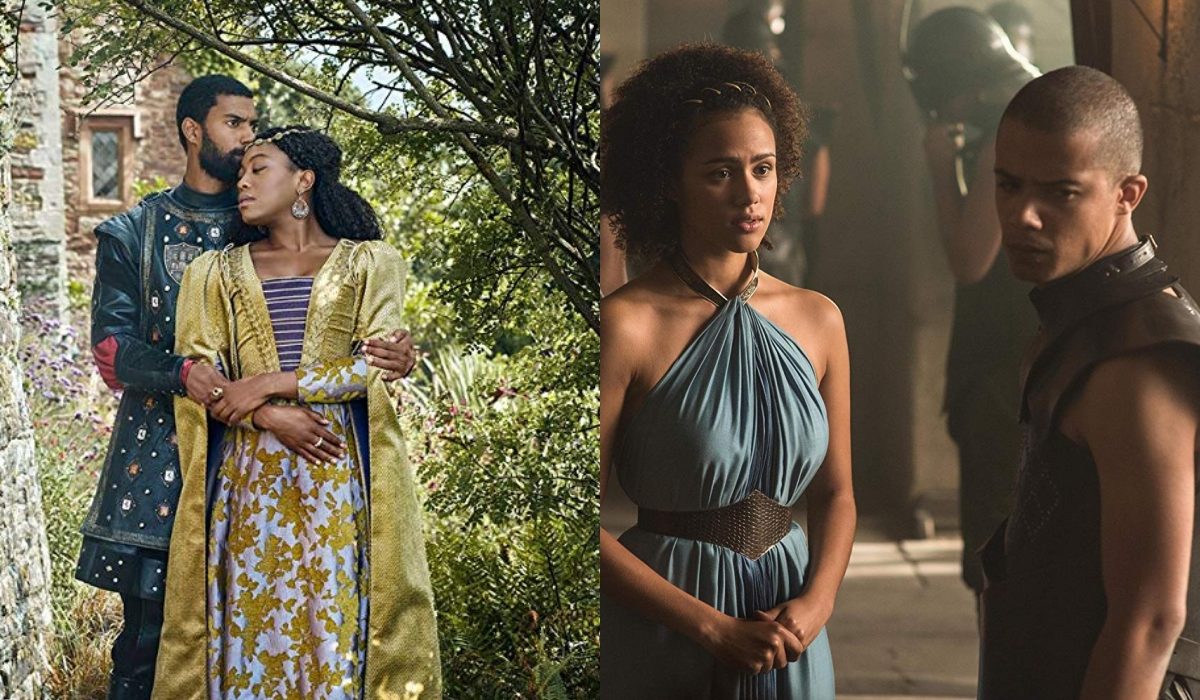 Starz’ The Spanish Princess—starring Charlotte Hope as Catherine of Aragon in a British-American historical period drama limited series developed by Emma Frost and Matthew Graham—has been a fun ride for me as both an armchair Tudor Historian and a fan of Catherine of Aragon.

We so rarely get a look at the younger years of the Infanta-turned-Queen of England, so despite it being based on a series of novels that are, let’s just say, historically unsound, I was excited in seeing how the series would progress. I found that despite all the dramatic changes, it was worth it for not just the acting and good outfits, but because of how Frost and Graham crafted the character of Lina.

In the show, Lina de Cardonnes, played by the beautiful Stephanie Levi-John, is a lady-in-waiting to Catherine of Aragon. She’s a Black noblewoman who serves as Catherine’s friend, advisor, and lady. When the character was first showed in promotional material, I was both excited and nervous. Most period dramas, be they historical or fantasy, do not deal with race or attempt to include meaningful racial diversity. My fear was that Lina would be visible but mostly pushed into a supporting role.

Thankfully, I was so so wrong. While Lina’s race is never ignored, she is given ample amounts to do in the story. She’s the most important of Catherine’s ladies, and while Lina is supportive of Catherine and her goals, the story also allows her to have her own passions and motivation.

This is especially facilitated through her relationship with the moor soldier, Ovideo (Aaron Cobham). The series places them in a tender, loving relationship that is challenged by internal and external forces. Lina is a noblewoman and expected to marry a Tudor man to further cement the alliance between Spain and England. Ovideo is a Muslim, and Lina is a Catholic. Lina is loyal to Catherine, but Ovideo is loyal to their relationship above all others.

Lina isn’t hypersexualized but is also not turned into a sexless object of pure giving, either. Through her relationship with Ovideo, we see them share moments of passion and tenderness. The romance between them is tender and loving, but also thoughtful, with a natural conflict that has nothing to do with just their race.

When I spoke to Frost and Graham, they talked about wanting to use this series to shine a light on the myths of what race would have been like in this period.

“In a way it was very straightforward,” Graham said. “We simply approached her as a person. We had a backstory for her which was in part based in fact, but was kind of an amalgamation of several characters from history that were in Catherine’s court.”

Rather than be made into a servant or a more subservient character, they made Lina the daughter of a Morisco, advisor to the King. Moriscos were former Muslims, and their descendants had converted to Christianity. While race does come up on the show, the writers didn’t write the characters with that being their focus.

Because they chose that method, they could focus on what Lina would have been like as a noblewoman, which is “a bit of a snob,” Graham joked, and her relationship with Ovideo becomes a story about class conflict between two Black characters of different statuses. Graham also said that their relationships are based on a historical relationship between one of Catherine’s ladies who fell in love with a bowman named Ovideo, which gives it this extra bit of historical cuteness.

Despite the two shows being very different, I couldn’t help but compare the way Lina was written in comparison to Missandei from HBO’s Game of Thrones, especially in the last season. This comparison has nothing to do with the acting, as Nathalie Emmanuel was amazing in the role and brought a lot of tenderness to it, as did Grey Worm (Jacob Anderson). However, The Spanish Princess reminded me of just how low my standards for depictions for Blackness are in period dramas.

It was a pleasure, despite all the wild inaccuracies, to see a period drama that took the time and attention to develop its Black female lead—that she was treated with respect, dignity, and grace by the writers getting full storylines that didn’t just include her male partner. But most importantly, despite all the white shenanigans at the end of part one, both Oviedo and Lina survive.

I texted my friend after watching this season and told her that she needed to watch this because I’ve never seen Black people, let along a Black woman, treated this way in a medieval period drama. Hell, even Gwen from Merlin didn’t have it this good, and she got to be Queen of Camelot. It’s a testament to this show, but also an indictment of others.

So many period dramas take liberties with history, sometimes really wild ones (I’m looking at you, PBS’s Victoria), and yet, we mostly accept them as part of the process of crafting a historical story for a modern audience. Yet, there is so much “historical accuracy” pushback to the idea of crafting thoughtful diversity into the stories. Not only did The Spanish Princess do it and do it well, but they chose to take advantage of the historically based diversity of Catherine’s own entourage.

I’m excited for Part Two of The Spanish Princess, the last adventure into period dramas for awhile, Frost and Graham tell me, because it did something so many shows fail to do: it tried.