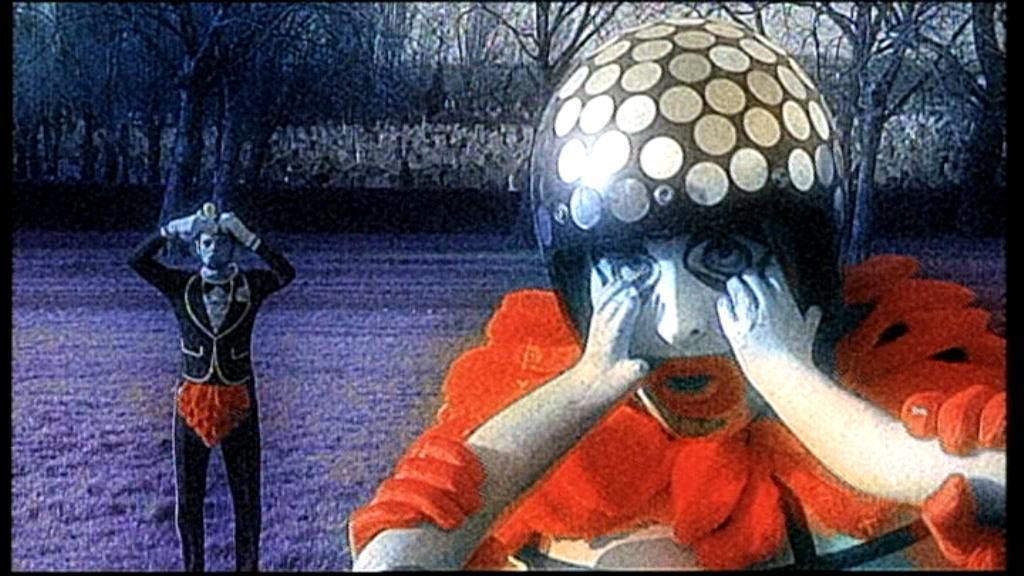 My word, is David Williams’ character Vulva ever on the eerie side.

I loved this episode that explored the world outside of Tim and Daisy’s apartment. It opens with yet another dream sequence from Tim who has drunk a little too much, accepted speed from a friendly stranger at the bar, as has begun to live his life as if he were partaking in his own video game. The opening is him battling zombies in his living area, and reading afterwards that this episode made Edgar Wright and Simon Pegg make Shaun of the Dead isn’t all that surprising; the head shot Tim delivers is very similar to some of the fight sequences in the bar at the end of that film.

Tim wakes, is hilarious and nonchalant when confessing to Daisy he’s been up all night since he’s on speed, and Daisy goes to fetch the mail, hopeful that there will be a response to one of the jobs she’s applied for. She’s moping about for a moment; heading towards disaster mode, when she sees she’s gotten an offer for an interview at Flap magazine. I love the bit where she’s preparing for any hard hitting interview questions when suddenly she veers off to pick out a suitable outfit.

Interviews are scary and no, we don’t always prepare well before heading into them. Prioritizing is a skillset we all learn after a few failures.

Brian appears early in what will end up being his episode and his entrance again gutted me. It’s something as simple as him showing up in the doorway, filling it up in height, with a mop in hand looking incredibly dour. The physicality this entire cast has is incredible and Brian always looks so terse. He looms over Tim who is still playing video games (one of my favorite running gags for the first half is how whenever someone enters he’s still on that game – we know these people).

“Did you want something?”

And the best line reading of the episode goes to Mark Heap with three words. Brian ignores Tim trying to get rid of him and confesses to him about Vulva having invited him to his upcoming performance. We flash back to their days of being lovers and artists and it’s easily the most eccentric sequence the show has done so far. After being kicked out and leaving to get ready for the show, Brian day dreams about meeting up and it’s put together with such craft. Its Williams’ over the top, theatrical makeup juxtaposed with the stark, simplicity of the background. Vulva is the focus of the show so Wright draws us in, giving us a tunnel vision access.

Daisy’s interview is pretty much destined to go horribly. She finds herself to be a self-motivated, powerful young woman but not in the corporate sense of the word and, due to being a little high and paranoid and a little out of her depth after a barrage of questions, she leaves with a peace sign while saying “girl power”.

I love shows that do awkward moments realistically. These are the moments in which I identify with characters, and nailing the feeling of an uncomfortable interview is any easy way into my heart. Even the way it’s shot stresses how hot and compressed everything feels when your nerves are working overtime. Daisy sticks out like a sore thumb in the fluorescent setting with lights blaring down on her.

She returns home to where, lo and behold, Tim is still playing his video game, Resident Evil II, asleep for a moment before a noise wakes him back up, hands already molding to controller position. We get one of our few sightings of Mike when he calls Tim to let him know he’s heading home which allows for this fantastic exchange.

“He’s not my boyfriend.”

I want a friendship like Mike and Tim’s. They seem to have it all figured out even with Mike passing out against a pay phone.

Continuing in the theme of Daisy always looking for a distraction, she’s quickly caught up in the performance art excitement when Brian comes downstairs to ask about his outfit, which leads to my favorite Tim line of the night.

“I think you should burn it because if you lose it you might find it again.”

Seriously, Tim is an ass and I love it.

Daisy invites Tim and herself along with Brian, much to Tim and Brian’s protests, but she quickly gets the former on board when she announces that there will be free alcohol. Tim quickly springs to action in a swift cut that turns to Tim standing up already dressed and geared up to go. Brian begrudgingly allows it even if he puts up a fuss. When they arrive Tim and Daisy immediately grab drinks (in Tim’s case he grabs two glasses of wine at once because smart people plan ahead) while Brian anxiously awaits seeing Vulva again.

Thank goodness we were spared for most of Vulva’s show. It’s a funny character used sparingly but the whole performance art would have gotten tiresome if it had gone on for much longer.

Anyways it’s after the show when things become more interesting. If you were tracking it correctly you know that throughout the time that’s passed there hasn’t been a moment in the episode where Tim hasn’t been messed up on either drugs or alcohol. Throw in the no sleep and the hallucinogenic performance he just saw he’s bound to be off kilter.

Brian is talking to Vulva and it isn’t going well, and we see Tim getting more flustered because to him Vulva has now turned into a zombie. So, Tim punches Vulva, grabs Brian and Daisy and makes a run for it. Cut to him passed out on the couch and Brian looking at him, endeared by his “drunken and childish” behavior. He makes a bit of a rousing speech about the power of a fist before running off, skittish after he almost woke Tim up.

Seriously, Brian is my favorite this week.

The episode ended on Daisy not getting the job and hey, we’ve all been there. Isn’t searching for jobs lovely?

Halfway through season one!