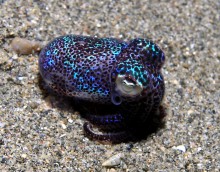 There’s a lot that we don’t know about living in space, especially about how organisms will adapt to life in low gravity. In an attempt to answer some of these questions, several baby bobtail squid will launch into orbit on the final mission of Space Shuttle Endeavor. This will be the first time that a cephalopod has traveled in space.

The study will look at how benifical bacteria function in space. Most complex animals, humans included, are hosts to troves of bacteria that aid in vital biological functions. A simple version of this is the relationship between the bobtail squid and Vibrio fischeri bacteria. In the wild, these bacteria find safe harbor within the baby squid, and the squid in turn uses the bacteria to create light. In the experiment, squid will be exposed to the bacteria while the space shuttle is in orbit. After 28 hours, the squid will be killed and preserved, their bodies analyzed once the shuttle returns to Earth.

It’s hypothesized that the low gravity environment could make it difficult for the bacteria to set up shop within the squid as easily as they do in nature. Previous experiments using ecoli bacteria found that life off earth did change how the bacteria function. In that case, the results were unsettling: After returning to earth, the bacteria were found to be three times deadlier than normal. That aside, this research will give scientists and mission planners a better understanding of organisms in space, and hopefully give us the knowledge to keep astronauts safe and healthy far from home.