Snowtober as seen from space | The Mary Sue

This is Snowtober, as Seen from Space 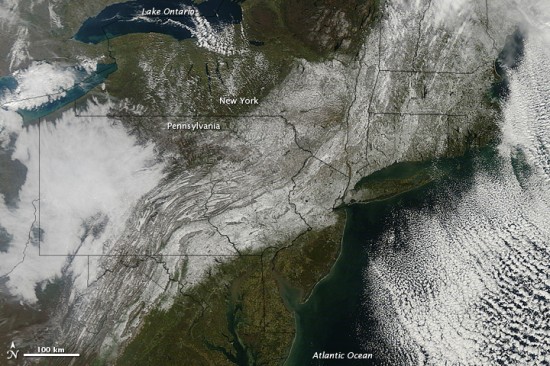 Residents of the northeast U.S. coast got a bit of a surprise this past weekend when a freak snowstorm dumped a load of heavy, wet snow well in advance of November. The storm, dubbed Snowtober, apparently broke records across the coast, dropping 32 inches of snow in some areas and leaving over 3 million homes without power. Amazingly, this storm actually did more damage in some areas than Hurricane Irene did.

Now, a totally different view of the weather comes from NASA’s Terra satellite, which captured the above image on October 30th. Doesn’t seem so bad from up there.