Spoiler: Astrophysicists are not impressed by fake space. 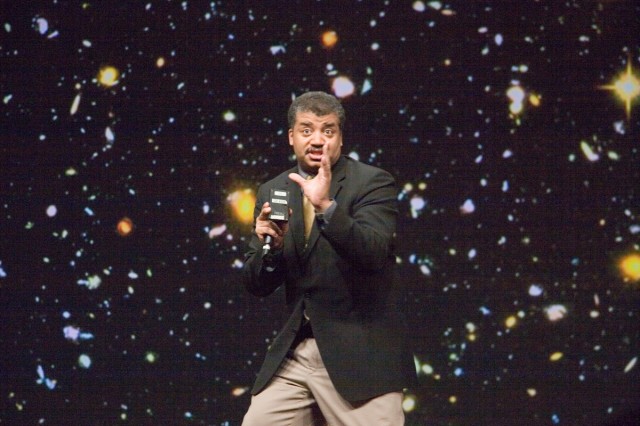 Starring Sandra Bullock and George Clooney, Gravity is the story of two astronauts surviving from a damaged space shuttle on a mission to service the Hubble Space Telescope. Sure, a movie about astronauts surviving in a space disaster sounds right up an astrophysicist’s alley, but its typical Hollywood space movie trappings caused Tyson to get all Mystery Science Theater on it.

Here are a few snippets of his priceless review:

The film #Gravity should be renamed “Angular Momentum”

He starts off taking light jabs at the title, but things only get better from there as Tyson finds the film has many mysteries to ponder.

Apparently, this one was explained near the beginning of the film, but Tyson was unimpressed with the reasoning.

I guess no one told him that Hollywood doesn’t always care about “facts.”

Mysteries of #Gravity: Why Bullock’s hair, in otherwise convincing zero-G scenes, did not float freely on her head.

Nor does it necessarily care about physics, even if the movie is called “Gravity.”

Some of his comments may seem like minor gripes, but this one about a major point of the movie is pretty ridiculous. The astronauts continually try to reestablish lost contact with the ground, but they never really should have lost it.

Finally, he sums it all up with the real burning question about the relative popularity of space movies and actual space.

Mysteries of #Gravity: Why we enjoy a SciFi film set in make-believe space more than we enjoy actual people set in real space

Here at Geekosystem, we enjoy both real and pretend space very much, and we feel his pain.

So, while one word reviews are largely DVD-box-quote fodder and rarely indicative of a movie’s quality, I think Tyson sums up Gravity‘s number one box office placement adequately in a single word: mysterious.

My Tweets hardly ever convey opinion. Mostly perspectives on the world. But if you must know, I enjoyed #Gravity very much.

And so did we, thanks to you.