Would You Fall Prey To The Sound Of My Voice? 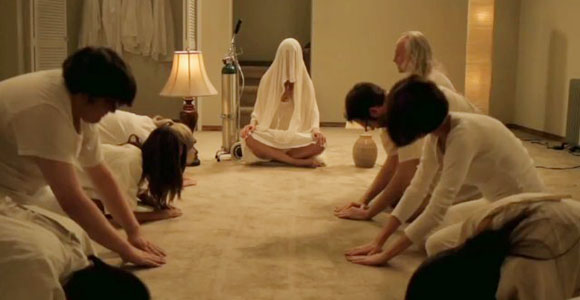 As soon as I heard the genius behind the film Another Earth was involved in making another pseudo-science fiction movie I knew I had to see it immediately. Brit Marling is back with a film called Sound of My Voice about a woman, who may or may not be a time traveler, who gathers believers like a cultist. Fox Searchlight was gracious enough to let us into an early screening, read on to find out more about the movie and whether or not its worth a watch.

I caught Another Earth on blu-ray (and reviewed it for The Mary Sue) , having missed its small theatrical run, and was completely blown away by it. While Another Earth had significant sci-fi themes, Sound of My Voice is more of a psychological thriller with sprinklings of sci-fi. It was directed by Zal Batmanglij and co-written by Batmanglij and Marling and premiered at the Sundance Film Festival in 2011. It will have its moment to shine in theaters when it opens tomorrow.

I apologize in advance for the comparisons I will likely keep making to Marling’s previous work but Another Earth left a huge mark on me and I couldn’t help but let it affect how I saw Sound of My Voice. The film centers on Peter Aitken (Christopher Denham) and Lorna Michaelson’s (Nicole Vicius) infiltration of a cult in which a woman named Maggie (Marling) has convinced a group of followers that she’s from the future. Peter and Lorna are a documentary film team but also a couple, and are out to expose Maggie as a fraud. They manage, not without difficulty, to gain access to the inner circle and see first-hand what makes Maggie so followable. 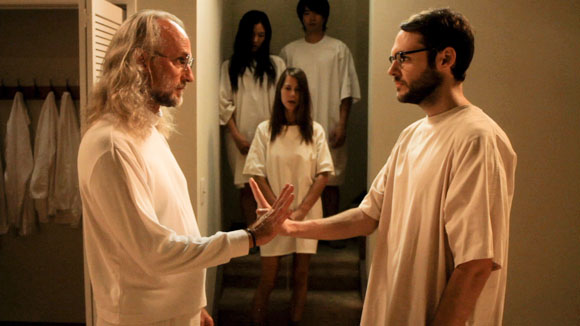 Batmanglij did an interview with io9.com in which he mentions that the impetus for the film was real-life fringe groups that he and Marling spent time with. And their research is evident in the film. The initiation and indoctrination into the group is rather intense, exactly what you’d expect, and certainly makes you understand how people can find themselves wrapped up in a cult. The story shows us the world inside and out of Maggie’s cult, both of which are truly engaging. But the real magic is in the characters that make up this group.

Marling was stunning as Maggie. Her face, and yes, her voice, are easy to fall prey to and even when Peter and Lorna are uncovering truth to the contrary, you want to believe Maggie is telling the truth. Denham takes the brunt of the plot on his shoulders and does so admirably. He breathes life into Peter the way Maggie breathes life into her story. Vicius is stuck between a rock and a hard place in the plot but does a great job depicting Lorna as possibly the only one grounded in reality.

As for critiques, I felt that Sound of My Voice had a bit too much of a cold open. We don’t get a whole lot of background information about Peter or Lorna so a lot is left up to deciphering what their motives where for going on this journey in the first place. You learn a bit more about them as time goes on but even that is ambiguous (like a lot of the film). I didn’t find Sound of My Voice nearly as thought provoking as I did Another Earth but perhaps that’s in part because we’re almost used to time travel now. Having a theme like that, whether it’s the truth or not, doesn’t put my mind into overdrive. I wonder if I would have liked it more had I seen this film before Another Earth? Either way, Sound of My Voice will leave you contemplating. And just a small note, there are a few “gross-out” scenes that viewers with sensitive stomachs may want to close their eyes for.

If your local cinema is showing Sound of My Voice, I recommend giving it a try this weekend. Or, when The Avengers is selling out next weekend, slip into a showing of this instead, Avengers will be there for weeks but this may not and it’s different from anything out there today. The creators already have a sequel in mind if the film does well, which I hope it will. I’m a viewer who can appreciate subtlety and that’s exactly what you get from Sound of My Voice. The story and acting are incredibly strong and it holds drama and suspense at every turn. Things get kicked up a notch in act three when Maggie asks Peter so do something illegal to prove his loyalty (and in turn, keep his spying secret) but the entire ride is one I think you’ll enjoy. Like Another Earth (yes, I’m doing that again), Sound of My Voice leaves you with many questions. But perhaps, in this case, we’ll get answers in the future (no pun intended).