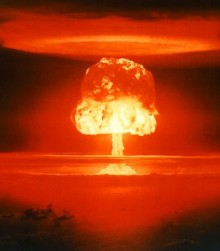 With the culmination of the SOPA hearings conveniently postponed until sometime in January, the tech world gained a little bit of time to prepare and execute some anti-SOPA demonstrations. Wikipedia had been considering a protest blackout that, as of yet, has not come to fruition and, according to reports by CNET, other Internet giants including Google, Twitter, and Facebook may be considering the “nuclear option” as well. The reports are derived from a quote by Markham Erickson head of the NetCoalition trade association that calls the aforementioned companies members.  “There have been some serious discussions about that,” Erickson says. “It has never happened before.”

That seems to be where the evidence of such consideration begins and ends, however. Wikipedia’s Jimmy Wales was pretty vocal about the possibility a few weeks ago, but that discussion has since gone relatively quiet and as far as I can tell, none of the companies listed as members at NetColition have so much as uttered the word “blackout” except perhaps behind closed doors. All of them have been engaged in various statements and petitions expressing their vehement opposition of SOPA, yes, but none of them have threatened or suggested blackout, yet.

If this were to come to pass, however, it could really shake up and invigorate the entire anti-SOPA movement. I don’t think I have to explain the implications of a day without Google or Twitter or Facebook to any of you. Even a simple click-through splash page without an actual blackout behind it could have drastic effects. Of course, it’s exciting to think about the potential from these Internet behemoths joining in solidarity against a common evil, especially after the loud, yet somewhat ineffective boycott that made GoDaddy change their stance on SOPA. But for the moment, it’s nothing more than wishful thinking. Still, I’m going to sit here and keep wishing for it.