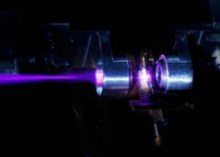 Remember that Blu-ray vs. HD DVD war that happened what feels like ages ago? Well Sony’s Blu-ray won, but even if the war were still raging, Sony’s upcoming developments would blow them both drastically out of the water. Like, so far out they’d be in a landlocked country. On another planet.

Sony’s new technology would allow for readable discs containing 20 times the information held on a current Blu-ray disc. For reference, the new disc can reportedly hold as many as 50 full movies, more if they’re short. Or, where we really could see practicality regarding DVD sales is television shows. Instead of a meager 3-6 episodes per disc, full seasons would now fit on a single disc. No more giant boxes and discs getting lost in the sofa.

Heck, with some shows, especially Joss Whedon’s (unfortunately), you can fit the entire series. There could be a disc that’s just “Everything Joss Whedon has done except Buffy.” And I would buy the flip out of it.

Just how is Sony pulling this off? Well, they’re charging their lasers, that’s how! Specifically, a blue-violet laser that shoots very thin beams at a very high rate. And the light output of this laser will be over 100 times that of other, similar lasers. Development is being done alongside researchers and engineers at Tohoku University.

Technically, development is the only plan for the laser announced so far. No marketing plans have been made official, though honestly how could they not? Of course if it comes anytime soon (which there’s really no way of gauging) some PS3 owners might be a wee bit pissed. But honestly, it’s worth it for the disc space. The biggest question on my mind (aside from “Can I haz dis nao?!!!”) is what it’ll be called. Blu-vi-ray? Vio-ray? The thneed? Your guess is as good as mine.

(Via Examiner via Slashdot via CrunchGear via Gizmodo)