Sony Working on “300-Style Romeo and Juliet,” A PLAGUE ON EVERYONE’S HOUSES 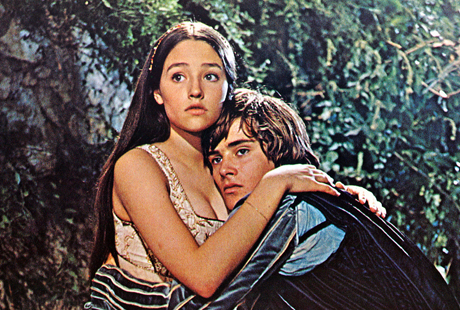 Sure, the beauty of Shakespeare’s body of work is its universality and the fact that the text can hold up under even the most conceptually adventurous adaptations, but must we keep describing projects as “Smurfs-like” or “300-esque” when those particular filmic influences sound ridiculous in context? I didn’t hate 300, but look at those two romantic babies above and then look at this angry yelling man:

Admit this is comedic juxtaposition.

The studio is in final negotiations to pick up Verona, the fair city which is the setting of William Shakespeare’s Romeo and Juliet, a spec by Neil Widener and Gavin James that retells that tale.

Exact details are being kept more clandestine than a love affair between two teens from opposing Italian families, but the script is said to reimagine the classic love story through a lens of an epic, 300-style world. 300 was the gritty and fantastical Zack Snyder movie that adapted the Frank Miller comic book miniseries that retold a battle between Greeks vs. Persians in a stylized and heightened reality.

Gerard Butler is concerned about what “retelling” means.

Although I literally cannot think of a descriptor I like less for most adaptations than “Zack Snyder-like,” I would actually be down with a literal 300/R&J crossover movie. Basically, I just want to watch Leonidas give Romeo what-for. That’ll teach you to forget about Rosaline, you punk-ass creep!

What do you guys think? Excited or no?