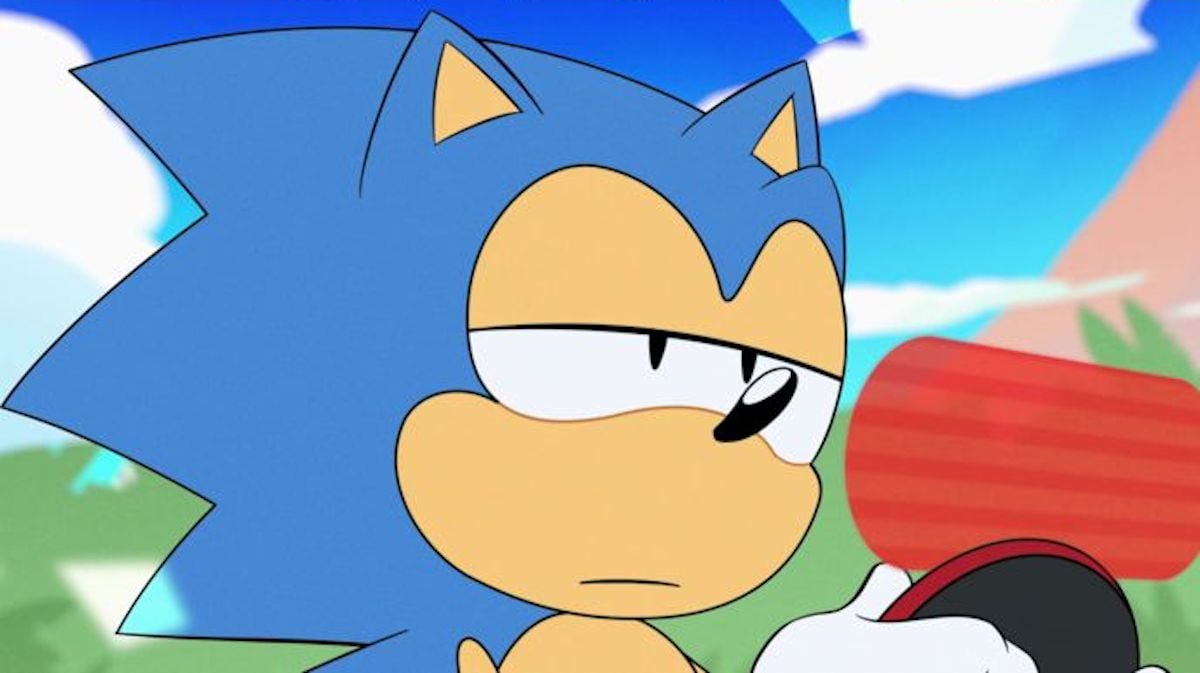 Ever since the first images of Sonic the Hedgehog were released, we’ve had questions. The beloved SEGA character, who will star in his own live-action movie, is a 3D CGI creation that has left fans somewhat concerned. First, there were the images of his super-jacked legs that raised some eyebrows.

apparently a poster for Sonic The Hedgehog movie pic.twitter.com/WUrBpN7pOr

There was also some confusion around his humanoid body shape, with some fans wondering why Sonic was looking so swole. Is Sonic supposed to be sexy? What are these weird feelings? I don’t want them.

Paramount and SEGA seem to have taken some notes from the initial fan reactions by redesigning Sonic to be less muscular … but still unsettlingly anthropomorphic. Advertising agency Hamagami/Carroll, Inc. has leaked the branding deck for the film, which was quickly removed after the internet caught wind of it. Here’s a look at the latest Sonic design:

Breaking: According to documents obtained by the ResetEra board, we now have a first look at movie Sonic’s design in the upcoming #SonicMovie. Developing… #SonicNews pic.twitter.com/DHtgrOGIwo

I don’t know, guys; this Sonic is creeping me out. Is it the full frontal nudity save for the sneakers? Is it the unsettling murdery grin? All I know is I don’t like it, and it seems like Twitter shares my feelings:

here I put a pair of GLASSY REAL HUMAN EYES on Sonic, did this fix it

is he better now, did I solve it y/n

(actually it doesn’t look that different, does it) pic.twitter.com/BdaGrSSoar

They made Sonic the Hedgehog look like the mascot for a disease in a pharmaceutical ad pic.twitter.com/RG1u8KOQjV

Sonic the Hedgehog now looks like a Youth Pastor saying “the fastest way to Heaven is with a purity ring!” pic.twitter.com/uzcDJiw20Z

Not even the most obvious design choices went right!

IT WASN’T THAT HARD

IT REALLY WASN’T THAT HARD

YOU ALREADY HAD A DEAL WITH NIKE pic.twitter.com/XXwiIzsrt7

Even Sonic’s creator, Yuji Naka, isn’t feeling the redesign. Naka tweeted, “Is this a Sonic movie? I feel that it is important to look at the whole body visual of Sonic and head body and stomach. Did you not get a little more balance?”

We’ll have to wait and see if the design gets any more tweaks before the film is released. Honestly, I’m not expecting a lot from this film given the dismal history of video game movies. Not even the casting of Ben Schwartz (Parks and Recreation) as Sonic can get me excited. Schwartz will also be joined by James Marsden and Jim Carrey, who plays the villainous Eggman.

Sonic the Hedgehog hits theaters Nov. 8, 2019. Are you excited or skeeved out by the new character design?