Gina Rodriguez gets by with a little help from her friends. 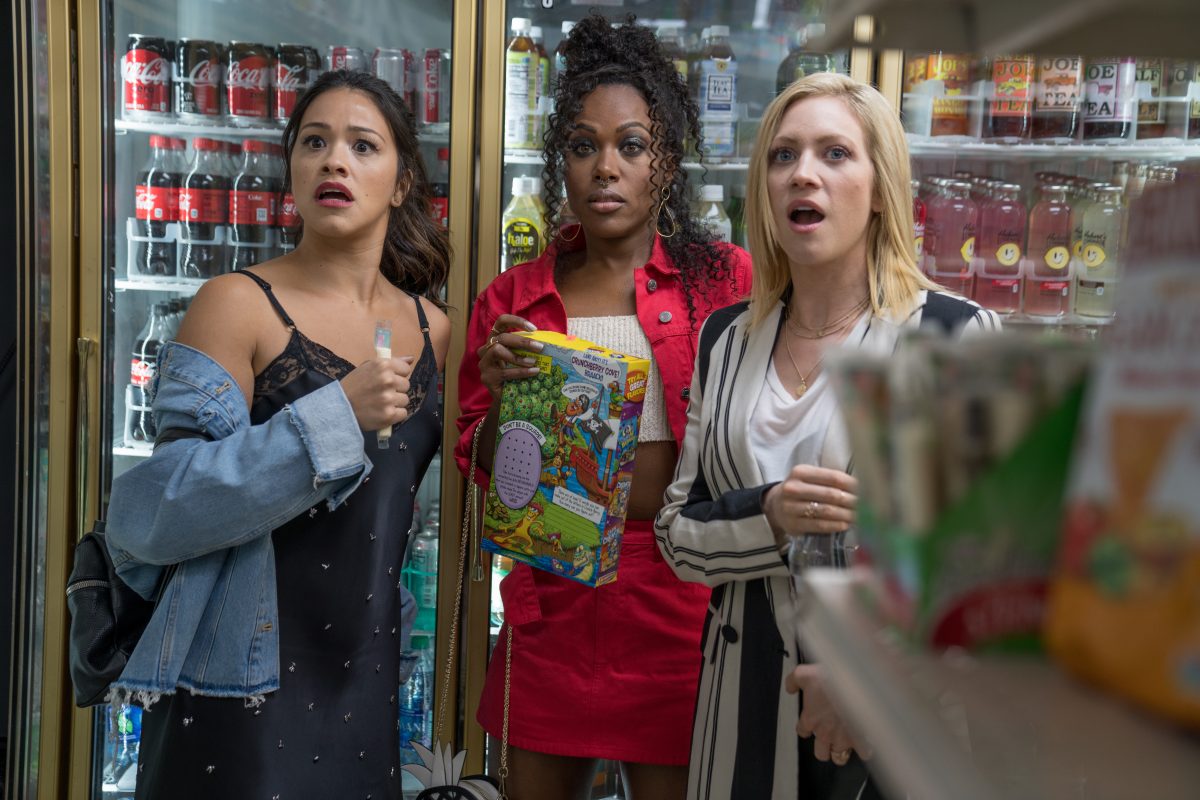 We need a new genre name for movies like Someone Great. To call it a romantic comedy would be to inaccurate, as the film follows the events of a break-up. To call it a “chick flick” is reductive and insulting. And why does a comedy about a group of female best friends behaving badly always fall under one of those monikers? We don’t have a similarly demeaning name for the dozens of wacky male-led comedies (although may I suggest bro-show? Or bromance?).

Someone Great is, in fact, a comedy with moments of drama and poignancy. The film centers on Jenny (Gina Rodriguez) a New York music journalist who has just landed her dream job at Rolling Stone. Unfortunately, her boyfriend of nine years Nate (LaKeith Stanfield) doesn’t want to do long distance and breaks up with her. With one week left in NYC, Jenny rallies her BFFs, commitment-phobic Erin (She’s Gotta Have It‘s DeWanda Wise) and uptight Blair (Pitch Perfect‘s Brittany Snow) for one last wild night out the Neon Classic concert.

The film follows the beats of your traditional “one crazy night” comedy: the struggle to get highly coveted VIP tickets, the “getting ready” music montage, and pre-game shopping for drugs, booze, and late night snacks. But interlaced with the dynamics of our girls behaving badly are the bittersweet flashbacks that tell the story of Nate and Jenny’s romance. Someone Great artfully captures the aftermath of a break-up, as we watch Rodriguez relive pivotal moments in her relationship.

Grief is never a straight line. It ebbs and flows, striking you in the most unlikely of places. A walk past your favorite spot, a song on the radio, can all evoke a flood of memories. Even simple tasks like grabbing a Diet Coke at her local bodega cause Jenny to flash back to moments of intimacy with Nate.

As the saga of Nate and Jenny unfolds, we learn that the problems of the relationship went much deeper than a cross country move. Nate and Jenny got together in college, but as they’ve grown through their twenties, they’ve become different people. All three women of Someone Great must contend with growing up and entering their thirties. Erin, who has never had a serious relationship, finds herself afraid to commit to her girlfriend Leah (Rebecca Naomi Jones). Blair is stuck in a dead-end relationship with her boyfriend Will (Alex Moffat) while fighting her feelings for college friend Matt (Peter Vack).

If this all seems heavy, don’t fear. Someone Great is still jam-packed with laughs, shenanigans, and delightful cameos. Jaboukie Young-White pops in as a woke wealthy hipster and RuPaul makes an appearance as the girl’s drug dealer. It moves briskly, with a killer soundtrack and artful cinematography.

With so many films about grown men coming of age, it’s refreshing to see women navigate the same journey. Life in your twenties is markedly different from life in your thirties, and that evolution can be painful as well as fulfilling. The film brims with authenticity, thanks to its writer/director Jennifer Kaytin Robinson, who created the criminally underrated series Sweet/Vicious.

Someone Great is a perfect “Girls Night In” film, and one you’ll want to revisit again and again. I’m excited to see what Kaytin Robinson does next.