She and Val need to get their own spin off movie. 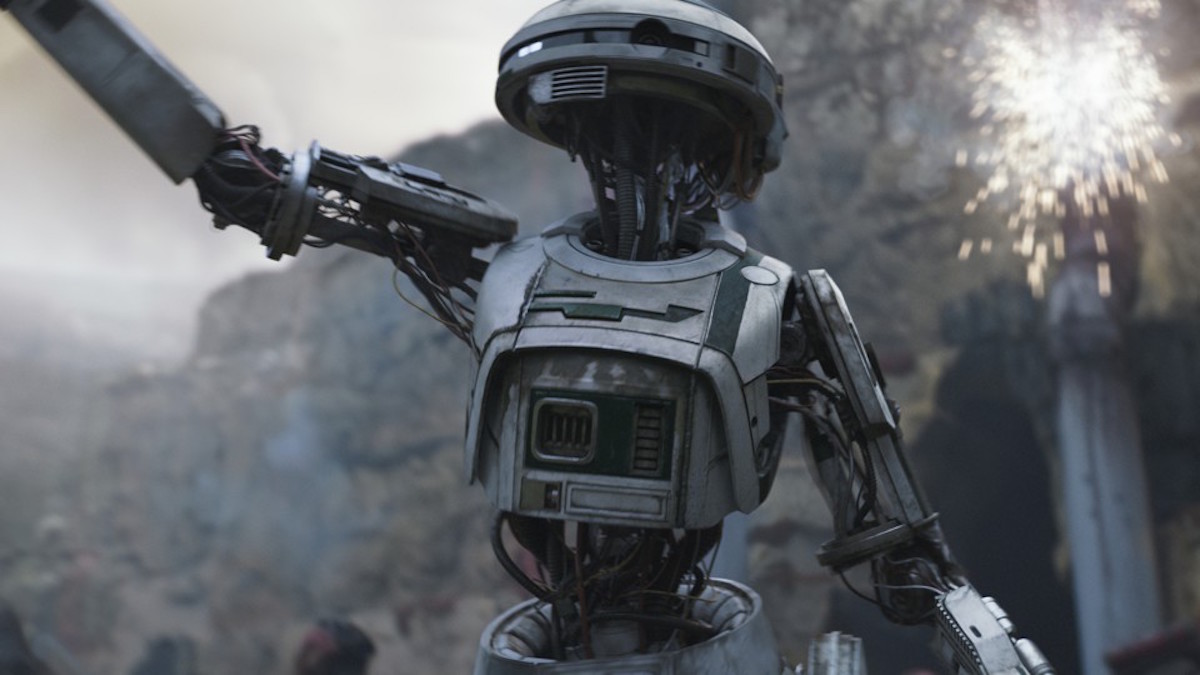 I try not to be one of those Star Wars fans that harps on everything they don’t like about the movie. Yes, it’s a work in progress, but I’d like to think I’m getting a little better. But my personal dislike for Solo just reared its unfortunate head with the latest excerpts from the novelization, which mostly amplified what I didn’t like about the film.

Namely, the treatment of L3, Star Wars’ first female-identifying droid and the leader of a droid rebellion who (and spoilers are about to follow) ends up enslaved on the Falcon for the rest of her life.

After L3 is killed on during the fight on Kessel, her memory banks are plugged into the Falcon in order to help them navigate the Kessel Run safely. This already sparked some horror in viewers, who saw L3 becoming part of the Falcon as her being enslaved in a way that would have horrified her had she had a choice. The worst part is is that these fears are now confirmed to be true in the novelization, which reveals L3’s realization of her fate.

The excerpt focuses on L3 and the Falcon conversing, and the awfulness really kicks in in the following quotes:

The Falcon was so gentle it was irritating. It wasn’t that easy, they explained. L3 had a choice to make. She could die with her final act being a liberator to all the droids on Kessel, or she could join with the Falcon, live on, and be part of something much big­ger. She could save them all.

Ridiculous. And be a slave inside a ship forever? No thank you.

The lights in the cockpit flickered, the reboot stalling. Lando put his hand on the computer, watching.

Being a ship wasn’t so bad, the Falcon insisted.

You go exactly where your pilot tells you, L3 countered.

You did that as a copilot, the Falcon reminded her.

That was different. I could leave anytime.

But you never did. You chose that life.

The Falcon was starting to speak in words now, a bit of a sharp­ness to their Binary.

If you refuse, you die. He dies. The others on the ship, they all die. If you join with us, we all can live. The choice is simple. L3 realized where the voice was coming from: The reboot was almost done.

We couldn’t have joined without you consenting to it. You made your decision a while ago. You just couldn’t admit it.

First off, the Falcon sounds like a jerk. L3 chose to follow Lando, because the film makes it clear that she has agency when she’s with him. It’s vastly different from being part of the ship and being told exactly where to go and what to do, because Lando makes it clear she can leave if she wants. He doesn’t own her.

There’s also the fact that the Falcon is threatening her with oblivion, as well as threatening her closest friend with death, to get her to join; let’s not forget the gaslighting that comes with that final line, as L3 never made the decision to be enslaved in a ship. The Falcon hypes up that it’s L3’s choice when it’s truly not. She’s forced to join, despite not wanting to. This means an eternity of being told where to go and what to do.

This is even worse when you know that despite being with Lando at first, she’ll eventually wind up in Han’s hands for years. Han, who had no respect for her in life, only respects her as his ship and even then still tells her what to do. The worst part is is that she can’t even say anything about it.

The fact they use the word consent while talking about this points to a thorny issue with two of Solo‘s main female characters. This is similar to how screenwriters Jon and Lawrence Kasdan used the word love to describe Qi’ra and Dryden Vos’s relationship, despite the film and novelization making it clear that Dryden literally owns Qi’ra; Qi’ra has no consent or choice in the matter. L3 is given a huge amount of agency by Lando, and her actively choosing to be his co-pilot is different than the Falcon tricking her under duress to become one with the ship.

In short, this is something horrifying. L3’s story is so flawed that it’s hard to pair it with the feminist bent Lucasfilm has been aiming for with their current films. Never mind that her quest for droid rights is painted as a joke, but the fact she ends up voiceless and powerless, trapped on a ship that Han then takes from Lando, is deeply problematic.

We are shown a woman who advocates for social justice having her ability to speak taken away and then she becomes a servant who cannot stand up for herself. If that’s not a bad message to send, I don’t know what is.

For the full excerpt, as well as more details on Qi’ra’s agency being taken away and an excerpt of Enfys Nest being the best part of the film, check out StarWars.com.