Solar Storms Could Devastate Technology, Cause $2 Trillion in Damage. Thanks A Lot, Sun! 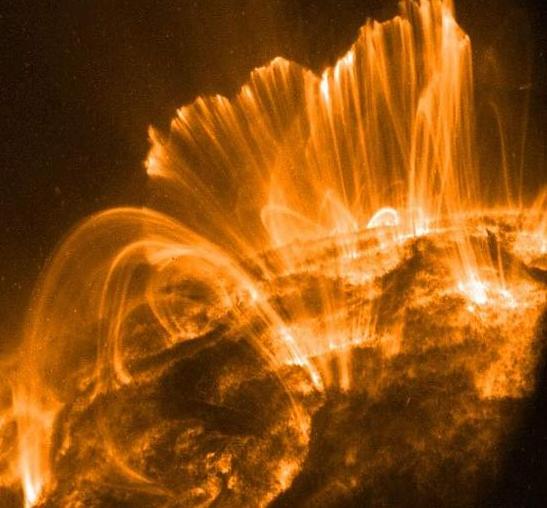 Don’t panic or anything, but there just might be the possibility that an upcoming solar storm could devastate out technological infrastructure, causing up to $2 trillion in damages and generally terrifying everyone out of their minds.

There have been past solar storms like those now being predicted, but Earth has always lucked out, escaping the line of fire. But according to CNN, scientists now warn that “the Sun is waking up from a deep slumber.” That can’t be good.

Below is CNN’s video explaining the gravity of the hypothetical:

While CNN focused on the devastation from a damages perspective, it’s amazing just how hard we could be hit by our own sun. The storm could knock out the global electrical grid. ABC’s FlashForward used the term “global blackout” to describe when everyone passed out at once. But this storm could cause a real, more believable and yet no less devastating global blackout, knocking out electricity worldwide, and we have no idea how long it would take to repair, because we’ve never been through this kind of disaster before.

Some reassuring news from DVICE is that there is a way to protect at least some of our tech and communications infrastructure from being wiped out:

Thank goodness, some of the damage can be avoided by putting satellites in “safe mode,” shutting down transformers on smart electrical grids, and disconnecting our gadgetry when we know a solar storm is coming. And NASA is steadily learning how to forecast solar storms with help from the newly launched Solar Dynamics Observatory, along with numerous other spacecraft watching the sun.

Not to be a downer, but this solution makes sense from an electrical standpoint, but the CNN video above described how there could be large quantities of physical space junk hurled toward Earth, and putting satellites in safe mode doesn’t create a forcefield around them. Also, nobody has yet addressed whether space junk could actually be thrown into the Earth’s surface, and if so, what the destruction there would be.

NASA is on the case, monitoring the sun’s status, and we will surely know if such a cataclysmic event is going to occur in time to prepare as best we can. But even the best might not be that helpful against the sun. Let’s just hope that, as happened in April, the solar storms continue to miss us until the sun goes back to sleep.

(Via DVICE and HuffPo)