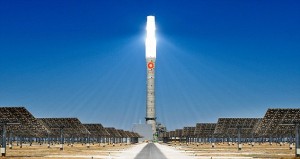 A recently opened solar power plant near Seville in southern Spain, is the first of its kind to be able to generate electricity from sunlight during the day and still retain enough heat to continue generating energy all the way through the night. The $410 million Gemasolar plant has a output of 20 megawatts, although at the moment, it does not produce at full capacity when the sun isn’t out.

The plant is of the heliostatic variety, meaning that it doesn’t derive its power from photovoltaics, but rather from the raw heat energy of sunlight. A series of concentric mirrors, 2,650 in this case, direct the sunlight at centrally located salt tanks. The heat melts the salt, which boils water around it, and the steam generated turns the turbines. The salt tanks’ ability to retain heat is what affords the plant up to 15 hours of sunless energy generation.

One of the main problems with most renewable energy sources is the relative unpredictability of the energy that powers them. Wind turbines are great until the wind stops blowing; solar plants are great until it gets cloudy. While this kind of plant doesn’t completely solve the problem, it is certainly a step in the right direction. The stored heat not only allows the power plant to generate through the night, but can be used during periods of subpar production during the day.

As it turns out, the area near Seville in southern Spain is one of the sunniest areas in Europe. This makes it a great place to try and push the technology to the limits of its efficiency, but also means that this approach won’t necessarily work well everywhere. Still, an improvement on solar energy production is still an advancement in practical, renewable energy production and that’s definitely a good thing. Maybe, with luck, we won’t have to deal with nuclear war after the Chinese invade U.S. occupied Canada for oil. Maybe.