Unsettling, Inflatable "Soft" Robot Undulates Its Way Into Our Hearts 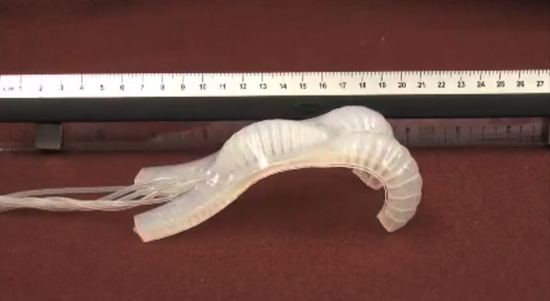 Just a few days after writing about the Ant-Roach, another example of robots that shirk rigid construction has emerged in the form of this delightful little fellow. This soft robot, built by a George M. Whitesides and his research team at Harvard, is capable of walking using only the inflation of specialized compartments for locomotion. The result is a floppy, undulating quadruped that could point the way for the future of robotics.

Unlike Ant-Roach, this soft robot doesn’t have specialized inflatable actuators. Instead, the entire body is comprised of interconnected chambers that are inflated and deflated in sequence to move the robot forward. Apparently, the researchers looked to invertebrates like starfish or squid, though the way this soft robot moves seems pretty unique.

Using low-pressure inflation below 10psi, the robot can also squeeze under tight spaces. In one example, researchers were able to navigate the bot through a slim crack, demonstrating the robot’s physical and mechanical flexibility. They also tested the robot on a variety of materials, again demonstrating how its unique series of gaits allowed it to walk across felt, gravel, mud, and Jell-O. The last of these must have felt surprisingly natural for the jiggling robot.

The researchers have published a paper on their slithering, undulating robot in PNAS. Perhaps unsurprisingly, this project has been funded partly by DARPA, which might mean we’ll see a soft robot on the scale of BigDog, though that might just be too much to take.

In my post on Ant-Roach, I talked about the benefits of soft robotics, namely how a complex robot can be controlled in a relatively low-tech manner, and how inflatable bots can be easily packed and unpacked. This new soft robot also shows off the versatility and durability of the concept. However, the researchers did concede that while soft robots could tumble and traverse their way across complex terrain, they are susceptible to tearing and puncture. Perhaps swarm robotics could help mitigate that; should one robot get caught and deflated, the others could avoid that particular obstacle.

Soft robots, while a little unsettling in this context, might also be better suited for interacting with humans. After all, humans are social creatures that interact through touch. A soft robot, though one that moves a little more naturally than this, might be more appealing and safe than a plastic or metal robot.

This is all speculation, of course. Though the world of soft robotics is just now finding its inflatable feet, it might just become the future for mechanical creatures.