Want to Become Immune to Mosquito Bites? Get Bit 15,000 Times a Year! 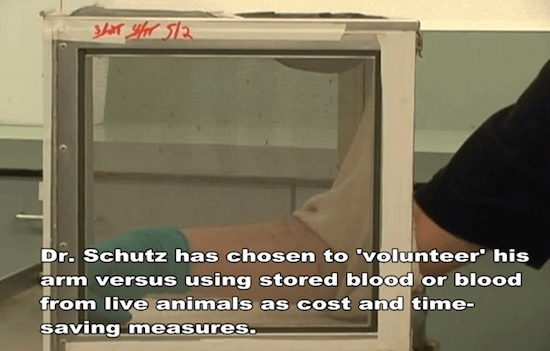 It’s starting to warm up here on the East Coast, and pretty soon we’ll be inundated with monstrous bloodsucking insects. You could spend a lot of money on nasty bug repellents, or you could do what entomologist Steve Schutz of the Contra Costa Mosquito & Vector Control District did and build up a tolerance. Of course, he’s had over 15,000 mosquito bites a year for the for past ten years — but it’s never too late to start.

This video may be a bit on the old side, but Schutz’s powers of concentration are simply stunning. Look at him sitting there, casually reading a magazine while 50 or so mosquitos are sucking his blood.

Of course, Schutz doesn’t do this for fun. The mosquitos he’s feeding have been raised in captivity, and are used for experiments requiring a pristine control group. Despite a decade of being bitten, Schutz admits that he’s not completely impervious to the itching. From the Contra Costa Times:

“It kind of tickles or itches a little bit, but I’ve been doing this for more than 10 years, and I’ve developed a tolerance,” Schutz said. He easily resists the urge to scratch a mosquito bite, or 50, which only makes the tingling worse as you spread the itch-inducing mosquito saliva.

Our hat is off to you, Dr. Schutz; truly you are a god among men.