So Are People Going To Stop Working With Woody Allen & Roman Polanski Now? 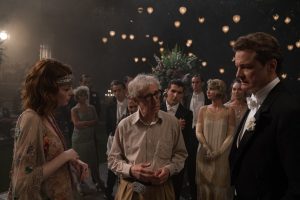 The Hollywood Reporter had a roundtable of the industry’s top producers and bothered to include one woman, so that’s something I guess. The panel included: Judd Apatow (The Big Sick), Seth Rogen (The Disaster Artist), Amy Pascal (The Post, Molly’s Game), Jason Blum (Get Out), Ridley Scott (Blade Runner 2049, All the Money in the World) and Eric Fellner (Darkest Hour). During the roundtable, they brought up the Weinstein situation and those who spoke in the video all condemned his actions and praised the women who came forward.

“There’s a culture of paying off people,” Apatow says in the video. Seth Rogen says that he heard “things” about Weinstein and never worked with him again after a bad experience ten years ago. “I think someone like him — everyone knows. I remember one of the first stories you heard about him involved inappropriate sexual misconduct.”

Pascal agreed, saying she doesn’t believe Weinstein is the only one: “I don’t think that he’s an outlier, and that’s probably why a lot of people haven’t spoken up…people really believed they’d get hurt.”

Seth Rogen puts it aptly when he says that there are people who are “pieces of shit” and people keep on working with them. For the money, for the power and for the awards. And that’s the core of the problem. Actors and actresses will still work with these people, bend over backward to defend them and pretend that the allegations are not important.

Look no further than Kate Winslet’s defense of working with both Woody Allen and Roman Polanski as covered by fellow The Mary Sue writer, Teresa Jusino just one month ago

However, she also released a statement about Weinstein’s behavior:

“The fact that these women are starting to speak out about the gross misconduct of one of our most important and well regarded film producers, is incredibly brave and has been deeply shocking to hear. The way Harvey Weinstein has treated these vulnerable, talented young women is NOT the way women should ever EVER deem to be acceptable or commonplace in ANY workplace.

“I have no doubt that for these women this time has been, and continues to be extremely traumatic. I fully embrace and salute their profound courage, and I unequivocally support this level of very necessary exposure of someone who has behaved in reprehensible and disgusting ways. His behaviour is without question disgraceful and appalling and very, very wrong. I had hoped that these kind of stories were just made up rumours, maybe we have all been naïve. And it makes me so angry. There must be ‘no tolerance’ of this degrading, vile treatment of women in ANY workplace anywhere in the world.”

Now, I am in no way trying to put special shame on Winslet because she is one of many actors and actresses who has worked with Allen and Polanski, but the reality is that while people are showing up to flay Weinstein (as they should) he is not the only one people need to be targeting.

Colin Firth also worked with Allen recently on the film Magic in the Moonlight and yet he told the Guardian, “It’s a feeling of nausea that I read what was going on while I was benefiting from Harvey Weinstein’s support.” Where was that nausea when he worked with Allen after Dylan Farrow’s letter was released the same year?

Every actor and actress with clout behind them should be refusing to work with people who have been accused of raping children or sexual misconduct or domestic violence because they can. The only way to truly show people that their actions are unacceptable is to not give them that kind of support. Those who do decide to stand by them should be asked at every turn why they are comfortable working with someone like that.

If there is a culture of paying people off in Hollywood then it is time to cut the purse strings. That is the only thing that will get real results.