How SNL, NYT, and Bernie Are Normalizing Marginalization | The Mary Sue

What do a comedy show, a newspaper, and a former political candidate have in common? 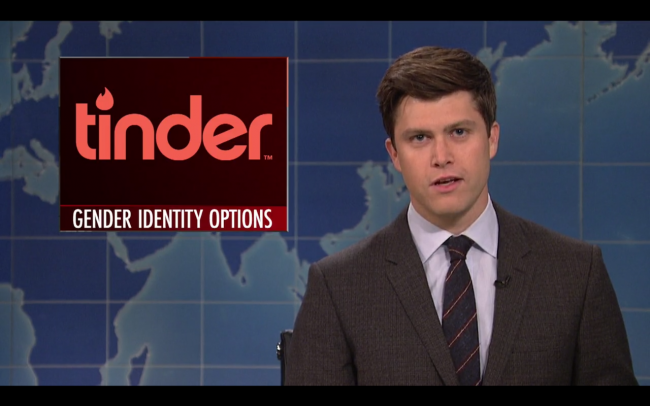 In a stunning example of “punching down, not up,” this latest edition of Weekend Update on Saturday Night Live took a swipe at the recent news that Tinder added 37 new gender identity options to their dating app. In whole, the joke was:

While a small part of me wants to take this joke as a swipe at people who congratulate themselves over token gestures of inclusion, a not-so-small part of me can’t help but feel that this joke is actually a swipe at “identity politics.” Given how much “identity politics” (a.k.a equal rights) have been footing the blame for the outcome of this election, though, I find it hard to lend SNL the benefit of the doubt here.

I’m pretty sure I don’t have to explain why this joke is particularly insulting to trans and non-binary people, but just in case, here you go.

For starters, this joke is one made at the expense of trans and non-binary people. The expense is made against an account that’s already vastly overdrawn, one that actually has never really seen better days, and one that will, most assuredly, not see any for quite some time. By taking a swipe at something as affirming as the acceptance of trans and non-binary people as people worth loving or dating, SNL has opted for a cheap laugh, one that further cements the viewpoints of those who seek to dehumanize and demonize us.

As I wrote in my election follow-up post, Vice President-Elect Mike Pence made a very real, very threatening promise that the Trump administration will be rescinding many of the executive order protections put in place by President Obama. This includes, but is not limited to, protections that establish trans people’s right to use the restrooms in school. Effectively, this and other actions will set the trans rights movement back years, if not decades. Suggesting—again, even jokingly—that we only have ourselves to blame for our lost rights is not only insulting, it’s so very incorrect.

I realize that this is a lot to be said for a “joke” that’s maybe 25 words long. But this joke illustrates a point many have been making since the election and since Stephen Bannon’s appointment to the White House, which is: the normalization of marginalization and prejudice begins now, and it begins with small, “harmless” jokes like these made at the expense of the most vulnerable people in our population. By making it okay to laugh at trans people and the people who care enough to do work to present their identities as valid, SNL has, effectively, helped pave the way for more people to see us as, well, not people. It denies the very real risks we face in the foreseeable future. It helps establish a culture that makes it okay to blame us for your problems, all for what? A cheap laugh?

The thing about jokes, especially on Saturday Night Live, is that they bear a thread of truth somewhere deep down inside. They resonate because, much to our chagrin, we find that they’re true in some small way, and we have to laugh at ourselves for it. But here, it isn’t people laughing at themselves—it’s people laughing at others.

Long history of trans and non-binary people being the butt of jokes on Saturday Night Live aside (hi, Pat), this particular “joke” is especially insulting because it comes just a week after they ran a cold open that featured Kate McKinnon as Hillary Clinton playing Leonard Cohen’s “Hallelujah.” It was a move that was very clearly trying to take the high road with this election, though the move was later hailed by some as crocodile tears after people remembered that Donald Trump hosted SNL last year—on November 7th, no less.

Thus, in a not-so-small way, SNL did its part in normalizing and perhaps glorifying Trump, much in the same way Jimmy Fallon did when he had him as a guest on The Tonight Show. It presented Trump as a humorous, funny person as opposed to someone who should be critiqued, criticized, and taken to task before embarking on a campaign to occupy the highest office in the land.

That is exactly the kind of behavior that leads to tacit acceptance of the marginalization and prejudice that many (rightfully) fear will make up the bulk of Trump’s administration. By making a joke at the expense of the marginalized, SNL is internalizing and then subsequently broadcasting viewpoints that directly parallel those of the people they seek to criticize on the show.

It should be noted, though, that nearly half of the Weekend Update segment overtly poked at the Trump administration, especially at his Cabinet selections. The show’s cold open also featured Alec Baldwin back in the ill-fitting suit to make fun of Trump’s first week as President-Elect. These, among other jokes peppered throughout Dave Chappelle’s episode last week, are excellent examples of punching up, punching at those in power. The thread of truth throughout those jokes resonates because they unify a base of people against a group of people who have already established themselves on a platform of hate and bigotry.

Here, however, by jokingly blaming gender nonconforming people (and by extension, diversity and inclusion), SNL instead unifies the viewpoints of those already in power with those who stand to lose the least in the coming years. The laughs given in response to the joke—light and sporadic though they may have been—aren’t necessarily the laughs of people who are laughing at themselves. They’re the laughs of people who resonate with the posited truth in the joke, which is that our time spent on diversity is to blame for losing the election. And honestly, they couldn’t be more wrong.

The thing is, SNL isn’t alone in their misplaced blame (as joking as it may have been).

In the time since the election, more than a few people have engaged in blame games, trying to find out what went wrong. In an op-ed for the New York Times, Mark Lilla, a professor at Columbia University, called for “the end of identity politics.” He wrote about how our focus on “identity politics” (a.k.a. diversity) was exactly why we lost the election. Sound familiar? Lilla wrote that our “own obsession with diversity has encouraged white, rural, religious Americans to think of themselves as a disadvantaged group whose identity is being threatened or ignored.” He then goes on to compare the growing consciousness of identities to the literal KKK:

Liberals should bear in mind that the first identity movement in American politics was the Ku Klux Klan, which still exists. Those who play the identity game should be prepared to lose it.

Comparing trans lives, non binary lives, black lives, and the lives of so many marginalized people to the KKK is staggeringly ignorant. The KKK was established to protect a status quo, one founded in racist and prejudiced bigotry, not to protect a marginalized identity. To think of the KKK as anything less than a hate group isn’t just wrong, it’s irresponsible. It’s—again—exactly the kind of ridiculous attitude that leads to terms like “alt-right” instead of “white supremacist” or “literal Nazi.” Moreover, it’s what leads to the acceptance and proliferation of such attitudes. It leads to that bigotry being integrated (ironic term) into normal, everyday life. It’s the kind of action that, many, many years from now, we’ll look back on and wonder “wow, how could we let that happen?”

You know, much like the entire god damn election.

Whereas SNL provides a scapegoat in jest, Lilla provides an opinion in a national publication, seemingly in earnest. Joining Lilla in an earnest call for an end to “identity politics” is none other than Bernie Sanders, who tried to establish his own platform by wooing those who believed in said “identity politics” (okay I’m calling it equal rights now because that’s what it is).

According to The Hill, Sanders was addressing a crowd at the Berklee Performance Center in Boston when he said, “It is not good enough for somebody to say, ‘I’m a woman, vote for me.’ That is not good enough.” On that much he might be right, but reducing Clinton’s entire campaign to those words is egregiously incorrect. She had her faults, that’s for damn sure, but that was hardly what her entire campaign embodied.

More than that, if we take the context of Trump’s campaign into account, it was more important that her campaign just not integrate the polarizing bigotry that seems to surround Trump at all times. By placing some emphasis on her gender throughout the campaign, Clinton symbolized a progressive kind of change (however incremental, thanks white feminism) that we should be working towards alongside important issues. And let’s not fool ourselves, here: though there were a few moments of emphasis on her own gender (the “woman card,” for example), it was usually in response to others discussing and dissecting it. Clinton ran a campaign that was focused on the issues at hand. It was Trump, it was the media, it was everybody else who couldn’t see past her gender.

This is all to say that these arguments against so-called “” equal rights are really just another way of railing against “” treating people with respect.

If the people who laughed at SNL‘s joke want something to blame, here’s a suggestion: blame your unwillingness to work for more. Blame your need to pat yourselves on the back for token gestures of diversity as opposed to understanding—really understanding—that the fight for equality was only just beginning. Don’t blame the people who are trying to humanize marginalized identities; blame yourselves for laughing at them.

Then, maybe when you’re done blaming people who don’t deserve it, you’ll be clear-headed enough to get past it. Until then, though, we’ll be over here, trying to protect ourselves while doing the actual work.