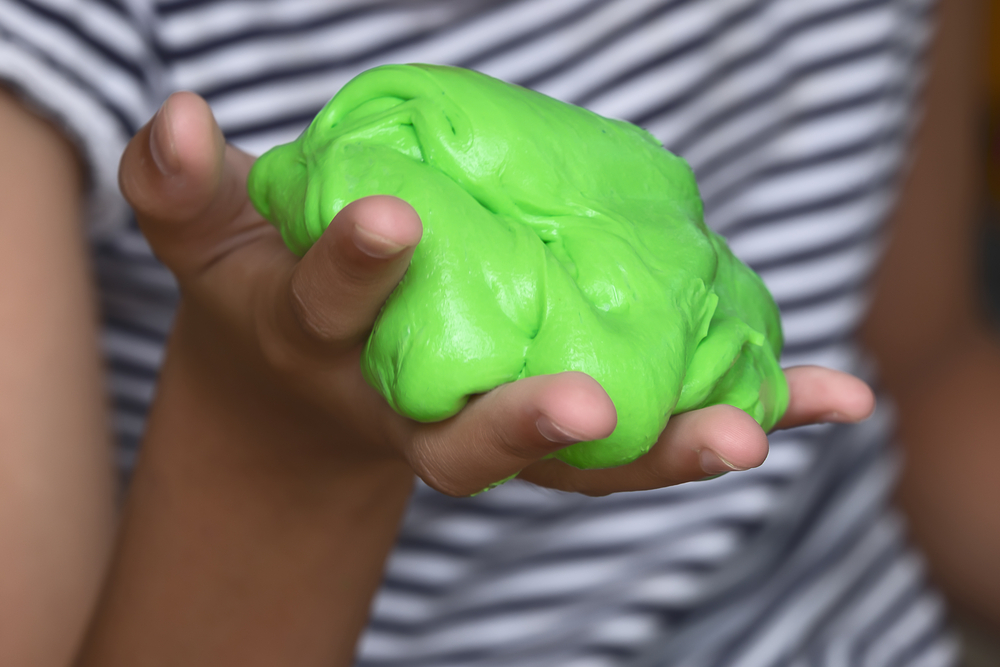 If you’re a fan of the internet in the form of Instagram, YouTube, or Tumblr, you’ve probably noticed a certain trend seeping into your feeds lately: Slime. No, not the green goop from the heyday of Nickelodeon; this slime is pretty, sparkly and the biggest new Instagram fad. Today’s slime looks like soft toffee, or gum, or gel, and videos of beautiful hands manipulating and mixing the stuff with colors, glitter, beads, and even make-up are all over the net. Slime-based Instagram accounts and YouTube channels have millions of followers that are generating serious money for their administrators, mainly young women, and even causing a shortage of Borax, which is a key ingredient in many DIY slime recipes.

While the trend has been covered all over lately, the origins of the phenomena remain mysterious to many journalists and even slimers themselves. Popular slime content creators confess that they came across it, thought “it looked really pretty,” and began their accounts because it was fun. They wanted to play with slime themselves, because they were seeing it everywhere. But where did it come from? In many of the articles linked above, the origins of the trend are hand-waved as murky, with only one pointing to the boom in the trend beginning in the summer of 2016. None of the articles I’ve read on the trend have addressed what, to me, as an avid Tumblr-er, was at least one obvious source: the online autistic community.

First, some background and some light science. Slime, as a material, has been around for a long time in many forms. We nineties kids remember products like Gak and foam that behave like slime. Slime itself is what’s called a non-Newtonian fluid, meaning it doesn’t quite follow the properties of fluids as observed by Isaac Newton. Non-Newtonian substances exist in-between a solid and a liquid and have all sorts of cool properties. (Check out this Mythbusters segment of “walking on water” for one of my favorites). Kids play with slime all the time, and I remember the days back in grade school when we made “Ooblek” as our version of slime. Slime is fun to watch and play with, and very soothing too, visually, texturally, and aurally, which is why slime became popular with people who enjoy or need “stimming.”

The term “stimming” may be new to you if you don’t know anyone in the autistic or neurodivergent community, but it’s a pretty old and established concept in those circles. For some on the autism spectrum or who fall under the neurodivergent umbrella, stimulating their senses with sounds, textures, pressure, color, or other elements can be soothing and calming. Someone may hold a piece of ice to prevent dissociation or to calm down from an episode. As those on the autistic spectrum have carved out spaces online, digital stimming has become popular. How does one “stim” online? Well, one way is to watch people play with slime.

On Tumblr, “stim blogs” have been popular for many years. One Tumblr user I spoke to, lunastims, started following stim blogs in 2015, long before the slime craze took off, and eventually created her own blog. She, like many stim blogs, creates gifs from videos—her own or others’—and creates posts of gifs based on certain themes. She also shares content created by other stim bloggers, who showcase videos, as well as gif sets and pictures. It’s not just slime. It can be anything soothing to watch, like milk being poured into coffee or mixing paint. I’ve found myself watching and enjoying this content whenever it makes its way across my Tumblr dash, thanks to a few of the autistic and neurodivergent blogs I follow. Slime blogs and stimming have been around on Tumblr for many years, long before the mid-2016 boom of slime into the mainstream. This was always my context when I saw a slime videos, and so, it was extremely surprising to me to not see stimming mentioned at all in recent coverage of the slime craze.

This is similar to the phenomenon called Autonomous Sensory Meridian Response, or ASMR, which is has exploded in popularity online, characterized by a physical sensation of tingling and pleasure, and a general sense of calm or euphoria. It can be caused by auditory stimulus as well as visual, and there is an entire genre of YouTube videos or sound clouds that share content designed to stimulate ASMR. Like stimming and slime, ASMR has been well known and used among autistic and neurodivergent people for a long time, as well. In short, watching something like a slime video makes your brain and body similarly happy, and for those with autism or other conditions, whose brains and bodies interact and react differently than others, that’s therapeutic.

Tracing where slime videos, ASMR, and stimming moved from a niche community to an all-out Instagram craze is tough, and I can’t fault other journalists for not finding the patient zero of these phenomena, but I think it’s important to acknowledge that this is trend that has its origins, at least in part, with the autistic and nondivergent communities. It’s also important not to dismiss a medium that has genuine therapeutic and personal benefits for many neurodivergent people as, as one writer put it, “almost post-modern in its apparent pointlessness.” To the people for whom these videos and stimming in general can be a real comfort, to read the trend that originated in their community as “pointless” is not only insulting, but closed-minded.

Slime and stimming aren’t the first, and I’m sure they won’t be the last, phenomena that have moved from the nondivergent community to the mainstream. This year, we also saw the fad of fidget spinners and objects explode. What began as a therapeutic technique for those with ADHD became a popular toy for everyone. With fidget spinners as well, the origins of the fad were lost, though not to the same extent as slime. I hesitate to use the term appropriation, because I fully believe that anyone should be allowed to enjoy slime (and fidget spinners) if they so desire, but it’s also important to understand where these fads came from, especially when it’s from a community of people that continue to be misunderstood and often misrepresented in the media.

Understanding stimming, slime, ASMR, and how they relate to autism and other sensory or neurological conditions, can help others to understand the experience of neurodivergence. If you’re having a rough day and fall down the rabbit hole of watching slime videos on Instagram for an hour because it’s meditative, soothing, or mesmerizing, consider why others may be viewing the same content. It may be the only way for someone to feel back at home in their body, or focus at all, or cope with a dissociative episode or sensory overload. Stim blogs and slime videos have made this accessible to all of us, and that’s a very positive thing.  The human brain is amazing and mysterious in ways we are just beginning to understand. As these therapies become mainstream, we shouldn’t forget that what may just be “pointless” stimulus for some, can be truly therapeutic and important for others.