C'mon, you're Party City, not Ricky's! 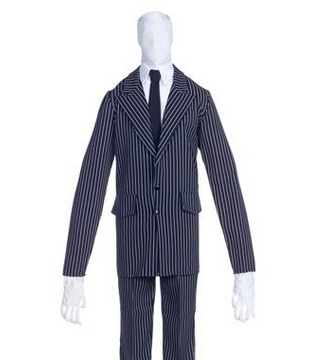 Before the creepy Internet meme became associated with some truly upsetting crimes, I think Slender Man would have made an awesome Halloween costume. Hell, in the past he’s even been a plush toy! But residents of Waukesha, Wisconsin—where two 12-year-old girls allegedly attacked a classmate last May in an apparent bid to please Slender Man—are understandably unhappy with some of the items at local Party City and Spirit Halloween stores.

Party City released this statement yesterday as an apology for selling $40 Slender Man suits in Waukesha:

Our thoughts and condolences go out to family and friends of the victim and the entire local community […] The local area stores have pulled the costume in question. Party City sells merchandise and costumes for all types of Halloween customers, and nothing we carry is meant to be offensive.

That statement very pointedly does not say that Party City will stop selling Slender Man merchandise entirely, and the controversial costumes (some of which are very goofy looking) can still be found online and presumably at other outlets. Local area Spirit Halloween stores have yet to comment on the community’s concerns, but are also still selling “Stalker Man” costumes and one inflatable “Bloody Slender Man” decoration.

Obviously selling blood-splattered Slender Man items in a town where presumably many residents had never heard of the Internet meme until it became inextricably linked to a child’s attempted murder is a dumb move—I’m not saying there wouldn’t be a market for the costumes in Waukesha, just not enough to outweigh the resulting PR problems. But should Party City or Spirit Halloween stop selling the costumes entirely?

Like many Halloween stores, both retailers sell costumes that are just as offensive (if not way worse) than Slender Man. I’m not necessarily saying that if Slender Man is deemed “too tasteless” then all insensitive Halloween costumes should be given the same treatment (maybe there’s a statute of limitations. For instance, is dressing as Jack the Ripper still a no-go?), but if we’re going to talk about “tasteless” and “Halloween” in the same sentence, then we shouldn’t overlook the cultural appropriation ingrained in the holiday. Both Party City and Spirit Halloween sell plenty of other problematic costumes that are long overdue for some scrutiny.

Regardless, I hope that any Haloweeners who do dress as Slender Man this year use the costume not to glorify recent events but to remove the resulting stigma surrounding Internet culture. The attack that happened in Waukesha is most likely the result of mental illness, not the Internet’s corruptive influence—and the less Slender Man is placed on that “Stalker Man” pedestal, the more attention can be put on preventing similar crimes from occurring.

Just not in Waukesha, for the love of all that is holy. Not there.