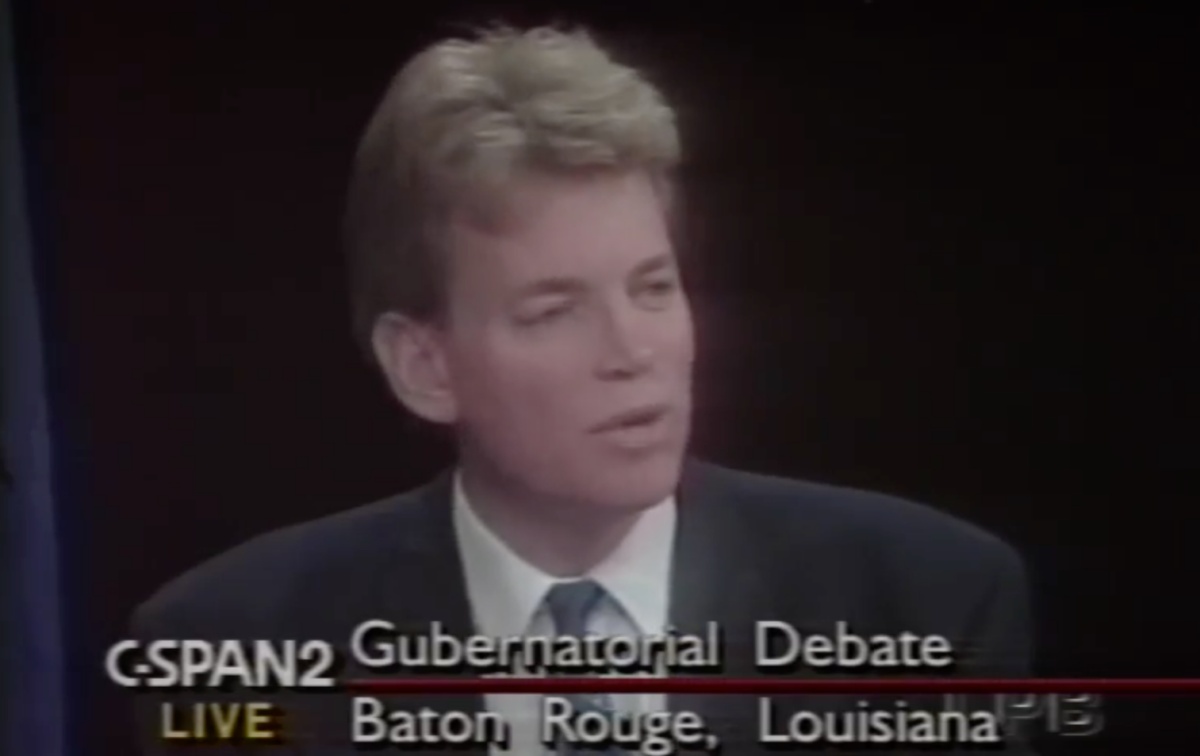 In 1991, David Duke won the runoff in the Louisiana governor race on the Republican ticket, and the state was forced to decide between a corrupt Democrat and a Republican who used to be the Grand Wizard of the Ku Klux Klan. Slate’s Slow Burn six-episode podcast series about this subject is both enlightening and horrifying because of the party’s unwillingness to officially denounce Duke.

Edwin W. Edwards, a Democrat and Duke’s rival in the election, was corrupt, no doubt about that, but David Duke is someone who has claimed the Holocaust was exaggerated. Despite that, in 1989, he managed to win election to the state legislature of Louisiana. People bought his “born again Christian” Republican hogwash and supported him.

Jo-Ann Jernigan, a voter, told the Times back in ’91, “He’s so cute. How can someone who looks like that be bad?”

Duke managed to adapt and redistribute the Republican platform that was anti-Affirmative Action and anti-welfare and used other Republicans to reach out to those in the party who would look the other way at his history in order to see a Republican get elected. One woman, Michelle Schauer, who had worked for Republican Governor Buddy Roemer, ended up working for the Duke campaign even though she claims she didn’t support him, despite things she heard from people who supported him.

“There is one gentleman,” Schauer recounted. “He goes, we’re starting to put a plan together for utilizing the Superdome. And I said, ‘Oh, yeah? For what? What kind of rally are you going to have in the Superdome?’ He goes, well, we’re going to figure out how to get all the black people—and of course, he didn’t use the word “black people”—into the Superdome. And then we’re gonna blow it up. And I just I looked at him like, ‘are you crazy?’ And he was not crazy. He was serious. And talking about it like this was something that he could accomplish. And I just remember sort of turning around and going, wow.”

Schauer didn’t stop working for the campaign and she claims that “I’m not proud of it, but I’m not ashamed. Would I choose differently, potentially? I don’t know.”

Yet, for plenty of others, Duke’s arrival on the political scene in their community was an opportunity to see what the people around them stood for. One person who spoke to Slate recounted a story about seeing Duke at a Saints Game during this time:

Duke was coming out into the main stadium from the breezeway that encircles it, turning and waving to the crowd and going back in. And the roar was this mixture of cheers and jeers every time. And I just remember the experience, the anxiety that rose in me as he made his way further, closer and closer to our area, because I knew that I was going to learn something about the people around me and I was afraid of what that was going to be. But here he came into our space and behind me and in front of me, there were people who cheered. They were part of our community. And your sense of that community is shattered permanently by that experience.

One Republican, Kirby Newberger, came up with a slogan that stuck: “Vote for the crook. It’s important.”

During the debate between Duke and Edwards, African-American newscaster Norman Robinson took the opportunity to tell Duke that he was “scared” at the prospect of Duke winning the election:

Duke tepidly apologized and called Robinson’s statements “unfair” to him. Robinson held Duke to the fire, and that helped mobilize the Black voters, but it also led to harassment against Robinson from those who felt he was being unfair to Duke. Even then, being civil to a Nazi was seen as more important than being frank about racism.

In the end, Duke lost the election, largely due to Black voter turnout, but it’s important to remember that during the runoff, Duke picked up nearly “60 percent of the white vote statewide and carried several upper-middle-class suburban parishes.” For many in the white middle-class race, racism wasn’t an issue, and voting for Duke was a vote against Edwards and his corruption, and that was worth voting for a known white supremacist.

The entire podcast miniseries is a chilling reminder of how easily racism can highjack a political party and a reminder of how important it is to mobilize communities to vote. It’s also a bittersweet reminder that Duke was defeated, but at the same time, how many will side with a racist.