Tina Fey and Amy Poehler: Sisters as More Than Tropes

This movie’s general concept is one big trope turned on its head. 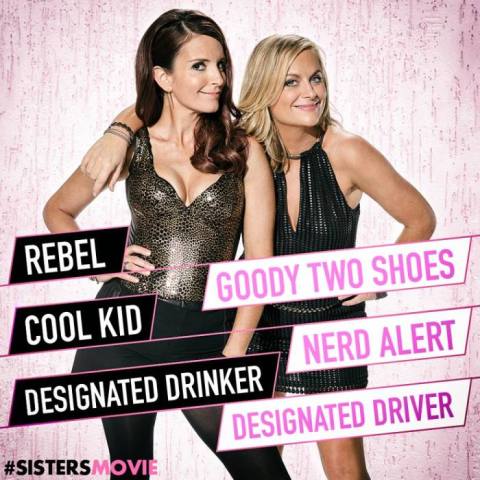 I knew I was going to go see Sisters. I love Amy Poehler and Tina Fey separately, but even more together, united in a bond of everlasting hilarity and power on-screen. Going in, I was expecting kind of a Baby Mama-ish movie—a wild woman, a responsible one, and sort of silly humor. Let’s be real: nobody does silly humor better than Fey and Poehler. What I didn’t expect was a deeper exploration of the typical Hollywood sister act.

The plot of Sisters, the one you get from the trailer/imdb is simple:

“Two sisters decide to throw one last house party before their parents sell their family home.”

We’re familiar with the one-night-party plot—movies like Superbad come to mind immediately. Here’s the Sisters catch: How often have we seen this party thrown by two middle-aged women? (“A little less Forever 21 and a little more Suddenly 42.”) This movie’s general concept is one big trope turned on its head, and even just for that, I already liked it.

But the real Sisters story is about opposite siblings Maura and Kate. We begin the story with their problems, party, and then end with them. These characters go deeper, a few steps further than the typical one night partiers, or even sister pairs in general.

The sibling-sister opposites trope is regularly used in comedy. Think more modern movies like Trainwreck, Save the Date, and 27 Dresses as well as classics like Ten Things I Hate About You, Much Ado About Nothing, and Game of Thrones—just kidding on that last one. (Kidding that it’s a classic comedy, anyway. I could totally argue that Sansa and Aria fit into this trope). There’s the “wild” sister, who often has one or more of the following traits: loud, outspoken, popular, overtly sexual, partier, “immoral,” and that kind of thing. Then there’s “responsible” sister, often annoyingly adorable, anxious, overbearing, overachieving, and stable. 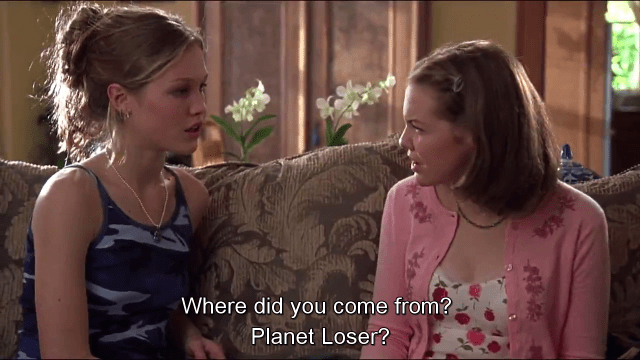 With this trope, usually the sisters understand each other better by the end and become friends. They each learn the basics of the other’s personality quirks: Wild Sister has a tragic reason for acting out, and Responsible Sister feels pressure to be perfect all the time. Their story nearly always looks like this:

The sisters don’t like or understand each other —> movie plot takes place —> they do!

Do we always have to portray a pair of opposing sisters with such oversimplification?

Sisters writer Paula Pell, of SNL, and director Jason Moore (Pitch Perfect) ask that question and answer with a resounding, “No. Duh.”

In the movie, Poehler and Fey switch up their roles from Baby Mama: This time, Poehler is the responsible younger sister, Maura, and Fey plays wild older sister Kate, but there’s a lot more to both of them than that.

We have to explain Kate first. Fey plays a single mom with a teenage daughter whom she loves very much. Yet, she’s unable to provide her kid, Haley, with a stable life. We meet Kate after she’s just lost her temper, shoved her boss, and was fired once again. In a bout of bad timing, Haley (played by Madison Davenport) has just returned from some incognito place she’s been staying all summer to get away from her mom’s chaotic lifestyle. When she finds out her mom’s been fired again, Haley pleads: “Why do you keep doing this mom?” In the same scene, Kate is kicked out of the apartment where she’s crashing, and Haley takes off again, refusing to let her mom know where she’s staying. “I’ll keep sending you pictures so you know I’m safe … You know why I don’t tell you where I’m going? Because you’ll show up there, and you’ll make a big scene like a hothead.”

Kate seems desperate to get her child back but truly incapable of pulling herself together. She has no real explanation for what keeps setting her off, and if you want my read on it, she seems to be struggling with an untreated mood disorder.

While the “wild” sister is usually shown as the fun(!!!) one, who maybe needs to learn some responsibility, Fey’s character is going through the real-life version of this trope—with funnier dialogue than reality, to be sure, but if a mom blows off work, and ipso facto doesn’t have a place for her child to live, the kid might feel unsafe and walk out. In real life, it’s very possible social services would be involved at some point.

Maura, played by Poehler, is Kate’s younger sister. She really likes to help people. She has a steady job as a nurse, she’s financially stable, and she even offers to help out her parents with money if they need it. (They don’t, they just want to sell their house.) She tries to save homeless people constantly, even when they aren’t actually homeless. She tries to manage her parents’ life and clearly suffers from some anxiety. She’s in a dating slump since her divorce and owns a one-eyed rescue dog, whom she dotes on. In spite of her tendency to isolate herself, she’s clearly much more together than her older sister.

At the beginning of the movie, the Ellis parents force Maura to tell Kate the news that they’re selling the childhood family home and moving into a retirement community. They explain that they don’t want to tell Kate because “you two take news so differently.” Maura asks, “Why do I always have to be the one? Just call her. You’re her parents.” Her parents pretend the Skype call is dropped by freezing.

It’s funny. The whole movie is funny, but this scene points to a history with the Ellis family. Maura seems to be shaped the way she is in part because she’s lived her whole life responsible for an unstable older sister. Her drive to help is a response to growing up with someone out of control. She needs to help people because she can’t help her sister. While we poke fun at her awkward lifestyle, her issues, too, are stemming from a real place. 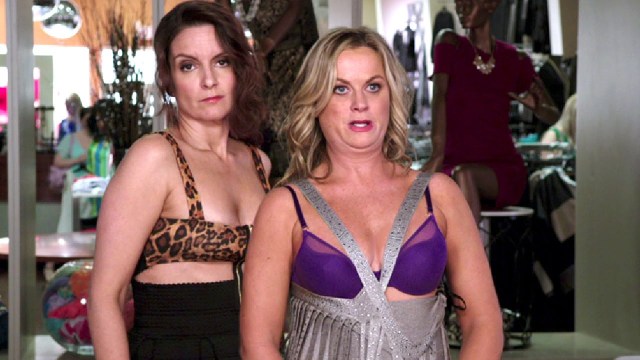 While these two sisters have little in common, they’re united, like Amy and Tina, in their love for being together. Unlike many sisters tropes in other movies, Kate and Maura get along really well. They love hanging out together, shopping together, complimenting, supporting, and validating each other constantly. They’re a team. Their opposite-ish personalities don’t keep them from being friends—best friends—which makes for a much more interesting story.

Starting off with the sisters as friends allows for a more realistic exploration of their relationship and how their individual issues can drive a wedge between them. It’s important particularly with women. I don’t want to watch to sisters judging and hating on each other for who they are. It’s much more interesting to me to watch two women supporting each other and having to deal with their actions. 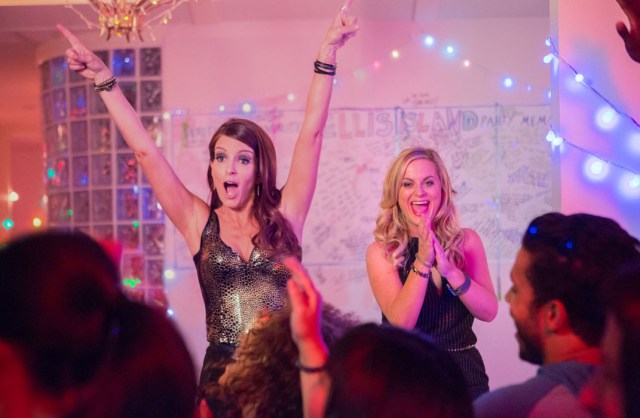 There’s a lot of partying in the middle of the movie. John Cena shows up to sell some drugs. Bobby Moynihan accidentally takes those drugs and bursts through a wall. Maya Rudolph keeps trying to sneak into the party, even though she’s been banned, despite her flawless jumpsuit. And it’s all really funny.

Then, towards the end, things start to get real again. Kate has tried to be the sober party mom for Maura, but after another tough conversation with her daughter, begins drinking. She drives a car into the “sister tree” in their backyard. Maura tries to have sex with James (Ike Barinholtz), but the endeavor fails when her anxiety (and a music box) gets in the way. All of this is leading to: SISTER FIGHT 2015. Kate finds out that Maura has been sheltering her daughter all summer without telling her. Maura is livid at Kate for being unable to stay sober for one night.

The fight is messy and complicated, but after the time-honored talking-to from their parents, both sisters own up to their issues. While this appears to be the typical sisters-plot ending, it can’t be, because Maura and Kate have supported each other for the entire film. They have a fight, a pool disappears into a large amount of mud, and they help each other get back on track. Kate, with a new job and a home for Hayley, and Maura beginning a more vulnerable, real romance with James.

Idyllic, yes, but this ending doesn’t show two women finally “getting” each other and now, forevermore, will never fight again. We can see them continuing to support each other, and occasionally knock-down drag-out fight, for the rest of their lives, walking off into that Florida sunset.

Throughout the film, I found myself really invested in the plot, especially trying to figure out who was right and who was wrong over the matter of Hayley. How could Maura hide Kate’s daughter? How could she not, when Hayley had asked her to? Could Kate really blame her?

It was grappling with this issue that I realized: I went Sisters with preconceived notions about how these two characters would be portrayed, and where I ended up was so different. I felt compelled to talk and write about these characters. Major props and cheers to the Sisters team for throwing a party of tropes, but not falling into the boring, sexist sinkholes. 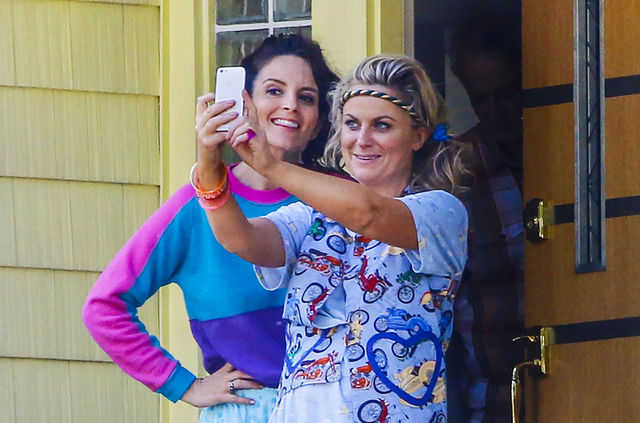 Molly Booth is a freelance writer and author of the YA debut, Saving Hamlet, coming from Disney-Hyperion 11/1/16! She writes books about Shakespeare and feelings. She was homeschooled through high school, which means she gained her Geek/Nerd/Dork Certificate at an early age. She lives in Portland, ME and has almost too many pets. Almost. Follow her on twitter and tumblr for more nerding.