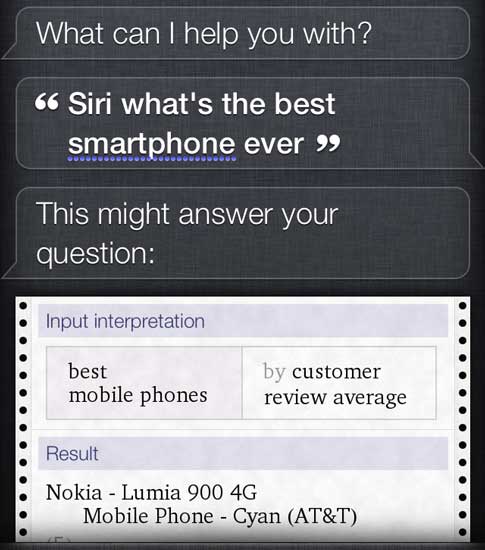 Though it was designed for functionality, Apple’s voice assistant Siri has proved most fascinating as a sounding board for mundane questions. The most recent revelation is that, according to Siri, the best smartphone on the market is the Nokia Lumia 900. A phone notable in this context for being the total antithesis of an iPhone in that it is not made by Apple and runs Microsoft’s mobile OS.

Like the furor over Siri’s lack of response for “abortion clinics,” (hint: it was because few planned parenthood clinics and the like have “abortion” in their name) this isn’t so much about Siri as it is Wolfram Alpha, the “computational knowledge engine” from which it pulls much of its information. According to recent reviews, the Lumia 900 is a very good phone, and so Wolfram spits it out as the “best.”

Here’s a fun thought-experiment: How would people feel if Siri said the iPhone 4s was the “best” smartphone? Hmm.

In an interesting twist, Siri for all its natural language processing, can’t parse the maker of what it calls the best smartphone. Like we’ve said before, the trouble with Siri isn’t so much what it can’t do, but how it does some tasks so well but falters at others. In the end, Siri is still a computer, and can give answers only as good as the questions we ask and the data it has. 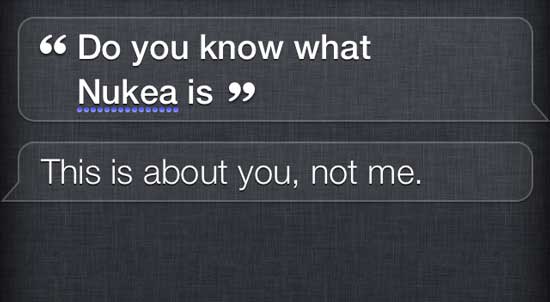