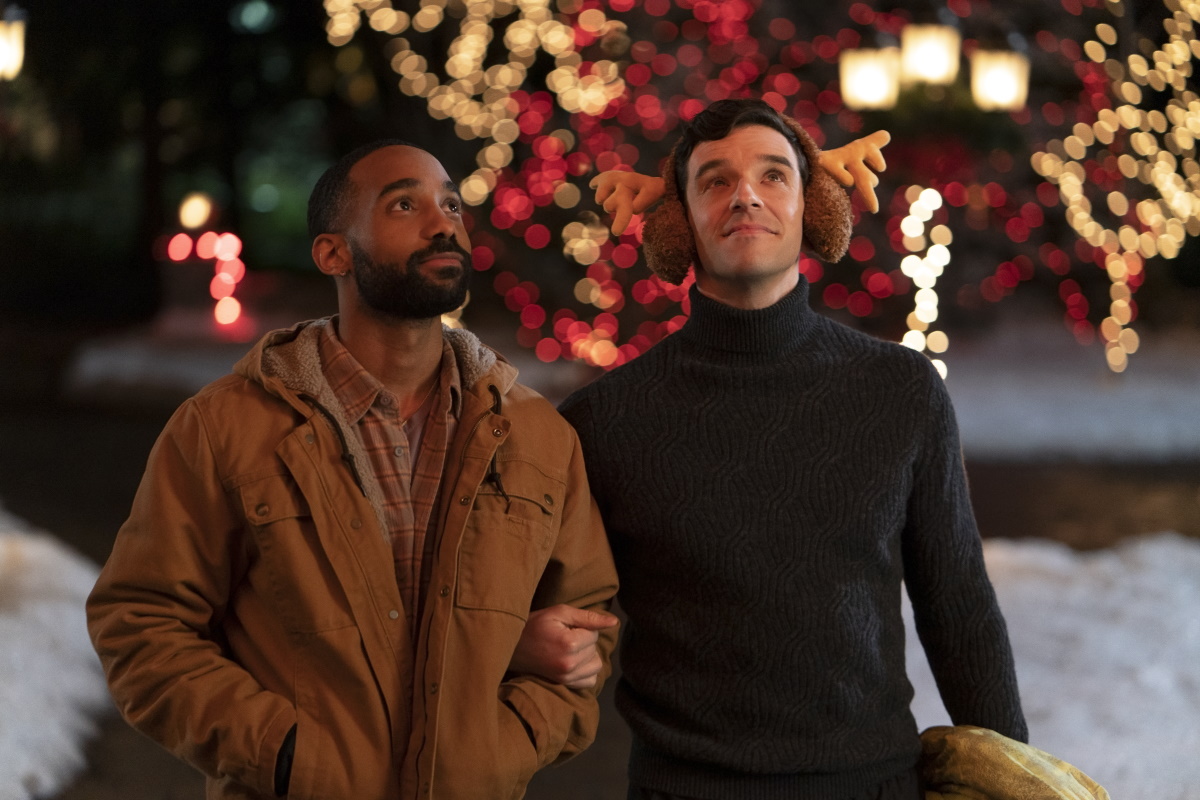 Spoilers for Single All the Way

Christmas brings about a certain kind of romance movie that’s comfortably predictable, and I mean that in the best possible way. It’s predictable in a way that your favorite hot cocoa is predictable. It’s got just the right amount of chocolate, maybe with some marshmallows, or maybe with some whipped cream.

My point is, it never lets you down when you’re in the mood for it because it’s exactly what you went in looking for.

That’s what Single All the Way was for me.

Now I would say you could watch the trailer and know what you’re in for, but that’s not always the case when it comes to LGBTQ+ movies – even if it’s set in a time where every other heterosexual movie like it has heart-pounding moments like “will the Christmas lights work this year?” I always have this sinking feeling in my stomach that any form of gay media will make room for a tragic, depressing narrative. That’s not to say there isn’t a place for the hardship we face due to bigotry, but when I sit down for a romantic Christmas movie I want the sleigh bells and the snowball fights and the “oops we’re standing under the mistletoe.”

I don’t wanna have to wonder if the family trip will include some “they mean well” set of grandparents who don’t mind “the gays” – they just don’t think they should get married.

Single All the Way doesn’t have any of that and is instead a rom-com you expect to see during the 25 Days of Christmas holiday movie marathon happening on certain networks. It’s also, unapologetically, a gay fanfic brought to life, and if you’re a frequent visitor of ao3 you’ll recognize the warm and fuzzy plot threads while watching.

Peter’s family is always ragging on him about being single. They love him to pieces (seriously, they adore him), but they think it’s time he made himself open to the possibility of love. Not that Peter isn’t trying, it’s just that his picks don’t always pan out.

He also has those insecure, soft gay boy moments where he doesn’t think he’s a catch.

Enter best friend, Nick, and a plan to have him pretend that they’re dating.

Apparently, Peter’s family is already Team Nick (I’ll get more into that later), so they would be thrilled to see the two friends together. Nick, being the perfect bestie that he is, decides to go along with it… until “Christmas Carole” (the holiday nickname for Peter’s mom, Carole) interrupts the plan with a trope of her own. 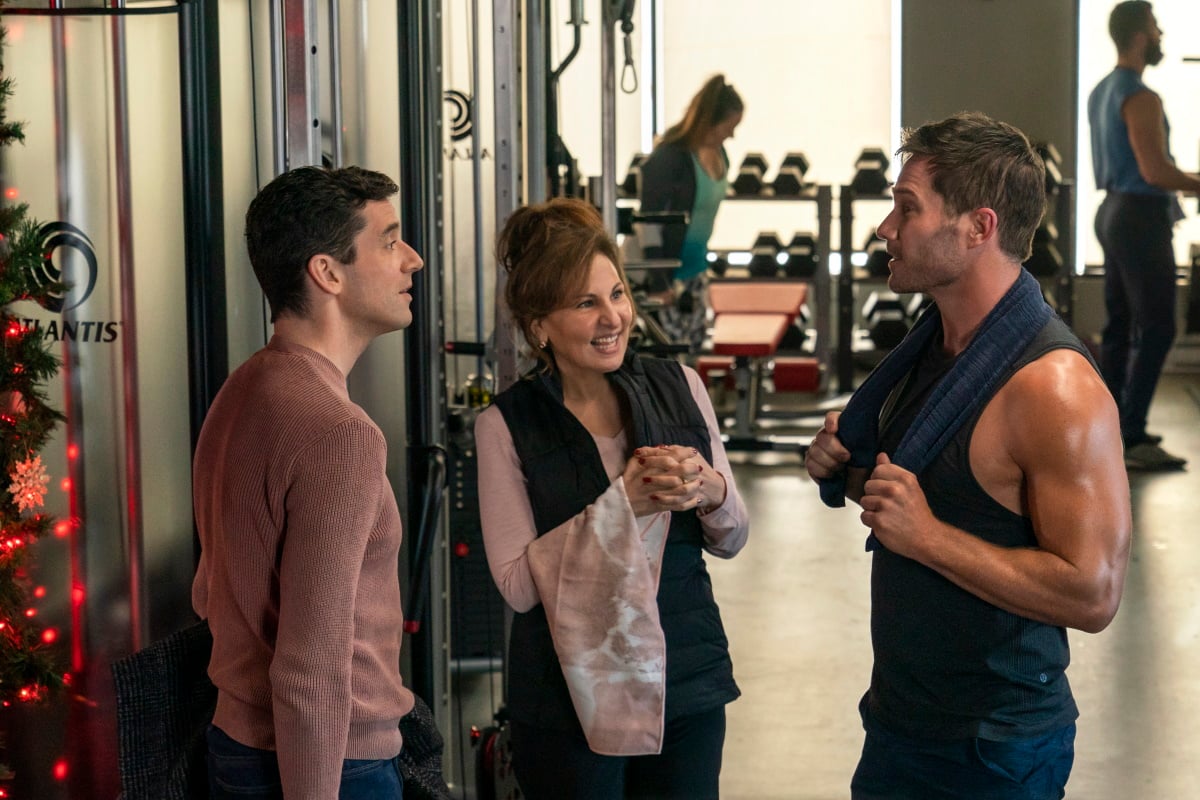 Carole decides to take matters into her own hands when it comes to her son and his relationship status. She sets up a blind date for him before Peter and Nick can announce their “relationship.” Nick is more than happy to have Peter go on the date, dodging the whole “fake dating” trope in favor of letting his friend find an actual love connection.

Nick is running from his true feelings, UwU.

Homophobia? I Don’t Know Her

While there are definitely fanfics that have characters dealing with homophobia, there are also fics where either 1) all of the characters are gay, 2) not a single person is homophobic, or 3) a combination of those two things. Back when I was coming out, fanfic was the only place that dared to have scenarios where gay characters were just gay without having to justify it, and I remember feeling some kind of way when people would say such stories were “unrealistic,” as if our happiness always had to come at a cost.

Single All the Way is the second scenario I mentioned, which is kinda impressive because our main characters (Peter and Nick) leave their predominantly gay surroundings to go back to Peter’s hometown, which has few gay people there – something that gets talked about during the blind date.

I was worried that the location change would bring about the closed-mindedness, as that seems to be the case when you have gay characters move from the big city to smalltown USA, but not only is there a lack of homophobia, but the gay characters are allowed to just BE without having to worry about Smalltown Sandra glaring at them for breathing the same air as her.

There also isn’t a lot of the “I’m straight and supportive” narrative. Peter, Nick, and James (Peter’s blind date) are gay. And… that’s it. There isn’t an overwhelming amount of that “I support your lifestyle” going on and, instead, the focus is on the slow burn friends to lovers developing between our leads (with a side of “oh no the new love interest is kinda great, actually.”)

Carole is the exception but in a more comical way. Carole is a cool mom who reads about “the community” to try and figure out how to handle her son’s love life. It’s more hilarious than annoying, as she’ll make comments about how two gay guys being friends doesn’t automatically mean they’ll transition to lovers… while setting her son up with the only other gay man in town because surely, a love connection is there, right?

Everyone Knows We’re In Love (Except Us) 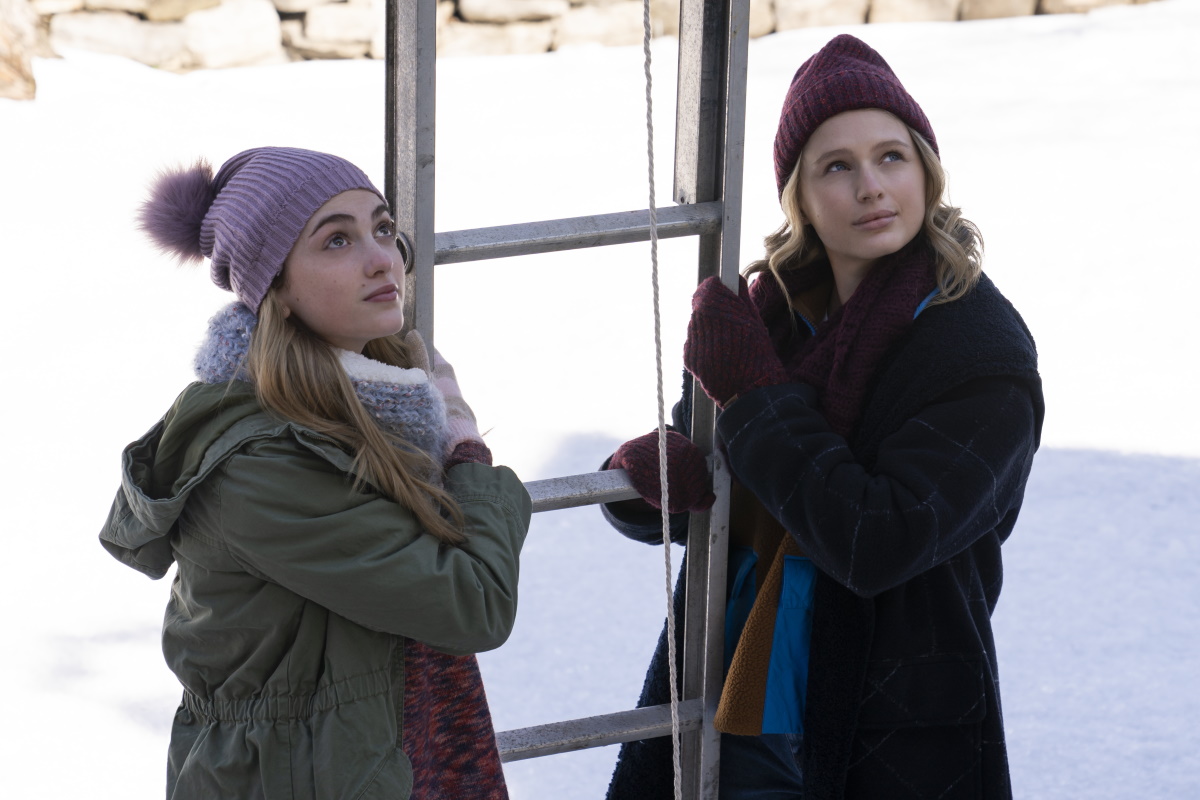 Almost everyone in Peter’s family thinks that he should be with Nick – except for Carole, but only because she wants James to be Peter’s choice. She also has given up on the Peter and Nick ship, having been trying to get it to sail for years, so she’s convinced that maybe they’re just meant to be friends.

Oh Carole, them boys just need a bit of a push, which leads to one of the holy grails of fanfic tropes.

But There Was Only One Bed…

Not only is there only one bed, but there’s only one bed because Peter’s relatives ran interference so there could be only one (bed). It is my pleasure to inform you that we have some pretty self-aware relatives in this film, ones who call each other to organize operation “Friends to Lovers” by (attempting to) sabotage Peter’s dates and, at one point, taking over his bed so he has no choice but to sleep in the room with Nick.

There are a couple of layers to get through before finally getting to the happily ever after part. Since homophobia isn’t one of them, we are 100% focused on the “will they, won’t they” between Peter and Nick.

James doesn’t make things easier since he’s actually a good dude who has a lot of cute moments with Peter.

James is this close to being himbo material, but he’s more silly than unintelligent. He’s got the looks and the heart of gold part of the equation, though, which makes things complicated when you know the friends should get together, but the new love interest keeps being a cutie.

Sadly, there’s no chance at an OT3 (my go-to answer in fic situations like this), but I will say that when James realizes who Peter is actually in love with, he not only steps aside, he encourages Peter to go after Nick. See, Peter’s scared because of the “what if this ruins our friendship” aspect of Friends to Lovers and needs reassurance that it’s okay to take a chance.

Once Peter realizes that he should go after Nick we are treated to a combination of “hurry to the airport to catch the guy I love before he leaves” and “grand romantic gesture” before finally seeing the two friends kiss.

Single All the Way is now streaming on Netflix, and while I can’t say for certain that the creators had (or still have) ao3 accounts, I wouldn’t be surprised if they did. It was so nice to watch a holiday movie where I could turn my brain off and just watch gay people fall in love instead of watching them deal with unaccepting families who have to remind us that acceptance is still something we’re fighting for.

But sometimes we just wanna watch a couple stand in front of some Christmas lights.

Now, as far as the fanfic tags in movies go… please give me more gay movies like this, holiday-themed or otherwise.

Where’s my Fake Dating For The Sake Of The Mission fic?

I want it all!