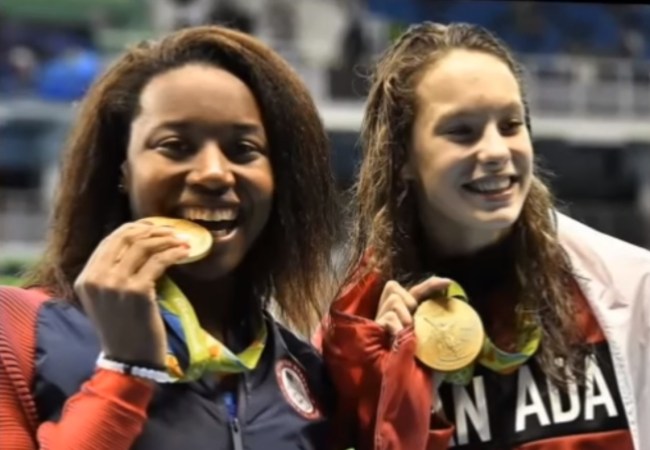 There are a bunch of women being brilliant at the 2016 Rio Olympics, particularly if their name is Simone. There’s been a lot of talk about the incredible Simone Biles, gymnast on Team USA who just secured a Gold Medal in the Women’s Individual All-Around and is totally the GOAT. However, another Simone not only won a Gold Medal yesterday, but made history while doing it. Team USA’s Simone Manuel became the first black woman to win an individual Olympic swimming medal.

Manuel ended up tying with Canada’s Penny Oleksiak for the Gold in the 100-meter freestyle, with both of them touching the wall at the exact same time: 52.70 seconds. Not only did Manuel make history for being the first black woman to earn an individual swimming medal, and not only was she the first American to medal in this event since 1984, but she and Oleksiak also broke a World Record with their time. NBD.

Manuel now adds onto a history with other black, female, US Olympic swimmers. Maritza Correia was the first black woman to be a member of the U.S. swim team, winning a Silver medal with her team in the 400-meter freestyle relay at the 2004 Athens Olympics. In 2012, Lia Neal won a Bronze medal as part of a relay at the London Games, and she earned a Silver medal with her team in a relay in Rio. And now there’s Manuel, being an inspiration to young swimmers and modeling what a black Gold medalist in Olympic Swimming looks like, hopefully encouraging others to follow.

As reported by SB Nation, Manuel is totally thinking along those lines saying, “It means a lot [to be the first black woman to earn gold in the pool]. I mean, this medal is not just for me. It’s for a whole bunch of people that came before me and have been an inspiration to me. Maritza [Correia], Cullen [Jones], and it’s for all the people after me, who believe they can’t do it. And I just want to be inspiration to others that you can do it.”

AHHH!!! My roomie @simone_manuel just won a gold medal! I’m shaking. So proud of you. #CHAMP

It was surprising, then, that when this kind of history was being made, there were some US news outlets that weren’t giving it the attention it deserved. NBC, the network exclusively covering these Olympic games in the US, didn’t air Manuel’s medal ceremony until an hour after it happened. Thanks to a comparison video over at Screengrabber, we can see exactly what NBC deemed too important to cut away from to cover this historic event. 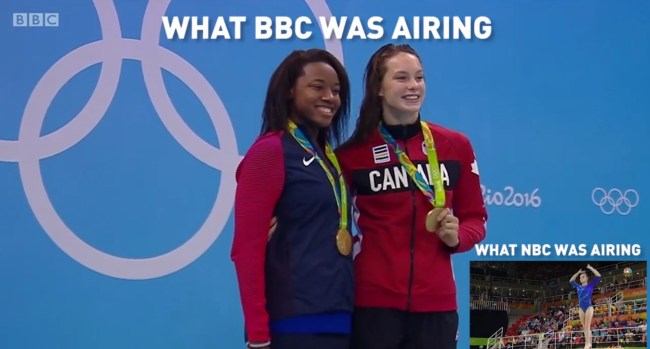 Yup. Rather than covering a member of Team USA making history as it happens, NBC instead chose to air seven-hour old footage of a member of the Russian gymnastics team performing. Normally, it annoys me when American media focuses on The American in the Story, as if news is only news when it happens to American citizens, but this is the Olympic Games! Every country is covering and supporting their own athletes!

Hell, would the BBC have been covering this particular ceremony if a Canadian hadn’t also won the Gold? I don’t know. But there they were, supporting Oleksiak, as well as being supremely congratulatory of Manuel and her accomplishment. NBC was late to the party.

Meanwhile, the San Jose Mercury News did a shoddy job of coverage, and were seemingly unable to write about Manuel’s accomplishment 1) while using her name in a headline, and 2) without connecting it to the accomplishments of a white guy:

Is this real life? So disappointing! Way to go @mercnews her name is @simone_manuel tf? pic.twitter.com/oCfqyGOFHp

The way this headline is worded, not only is she not a person, but it seems as though she’s a distraction from the “real” accomplishment, but that Phelps is deigning to share the spotlight with her.

As The Huffington Post points out, “[Critics] also slammed the headline as sexist, as it focused on Phelps and his achievement of winning his 22nd gold medal. That was despite his accomplishments forming the secondary part of the article, being only detailed from the 14th paragraph onwards.”

We apologize for an insensitive headline earlier on a story about Simone Manuel and Michael Phelps’ medal wins. https://t.co/ykWvcddaKf

Another news outlet late to the party.

It’d be really nice if, rather than needing to apologize, backpedal, or provide too-little-too late responses, mainstream media outlets learned to get these things right in the first place. All women generally, and women of color specifically, deserve better.

(via SB Nation, image via screencaps)