Inserting genes from animals like coral and jellyfish into silkworm DNA can turn plain white silk a variety of vibrant colors right at the source. 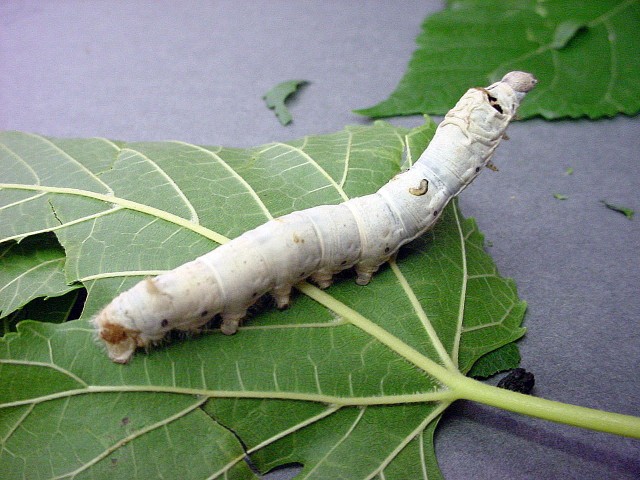 Humans have been harvesting silkworm cocoons to spin into textiles for millennia, but new technologies mean we’re continue to improve our techniques for making the luxurious thread. This week, for instance, researchers at Japan’s National Institute for Agrobiological Sciences announced that they have genetically engineered silkworms that produce red, orange, and green colored silks which glow beneath fluorescent light. Needless to say, the development could have huge ramifications for the textile and black light painting industries alike.

Led by researchers Tetsuya Iizuka and Toshiki Tamura, the team bred 20,000 transgenic silkworms by transplanting them with genes from species that create their own natural fluorescent proteins — namely two species of coral for the red and orange silks, with the green hue coming courtesy of a breed of jellyfish. While appearing fairly normal under normal lighting conditions, the neon shades become apparent under fluorescent light.

While the silks are colorful, they also presented some new problems for the team. Since the fluorescent proteins that give the silk its color are sensitive to heat, harvesting the cocoons is a more delicate process than the usual method, which involves heating the cocoons to a sweltering 100 C. Harvesting silk from the transgenic worms, meanwhile, requires  a dip in an mild alkaline bath, followed by being heated to a lower temperature in a vacuum, a process researchers say will render the colorful silks a bit more expensive than normal fabrics.

While the fluorescent silk is also weaker than its natural counterpart, it is already being used in suits and other clothing commissioned by the lab, and has been shown to retain its fluorescent qualities for as long as two years. The team reported their findings this month in the journal Advanced Functional Materials.