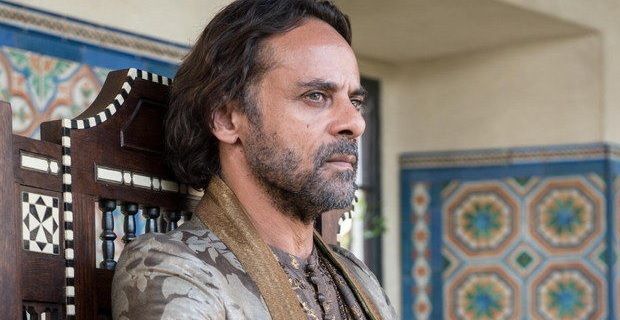 Alexander Siddig has recently joined Game of Thrones as Doran Martell, Prince of Dorne – and while no one can ever replace Pedro Pascal in our hearts, Siddig is doing a great job so far as his brother (though Ellaria Sand might disagree with us there). Spoiler-y things for Doran’s character follow.

“I got to see Pedro perform as [Doran’s] brother,” said Siddig of his first day on-set, “and that gave me all the information I needed.” Influenced by Pascal’s Chilean background, Siddig says that Doran can’t be quite as outlandish as Oberyn because Doran is a ruler. “Oberyn could afford to misbehave in a way that my character cannot. There’s a difference there.”

One of the most exciting parts of the role for Siddig is that his character uses a wheelchair, something not often seen in Westeros, let alone television.

“I was really excited by that,” he said, “not just from an actor’s point of view – because it’s always exciting to play under some strict limitation – but it was really, could I possibly figure out a way to give this guy gravity, authority and a sense of romance? This race of people seems to imbue that in their nature which is quite different from the other families who can be quite stern or mysterious. I was hoping I could do that in a wheelchair, and it was a great challenge.”

Along that line of thought he continued, “I don’t think he gets out very much, because he’s a little bit ashamed of the fact that he’s meant to be a masculine guy in a really macho culture. The fact he can’t get out of his chair is a real disability to him. I think it forces him to be more philosophical, or at least attempting to be wiser.”

Siddig also had great things to say about the three new warriors, the Sand Snakes. “They put the snake in sand snakes. I wouldn’t cross them!”

You can read the whole interview over on Blastr!