Urine Recycling Experiment Will be Conducted on Last Shuttle Mission 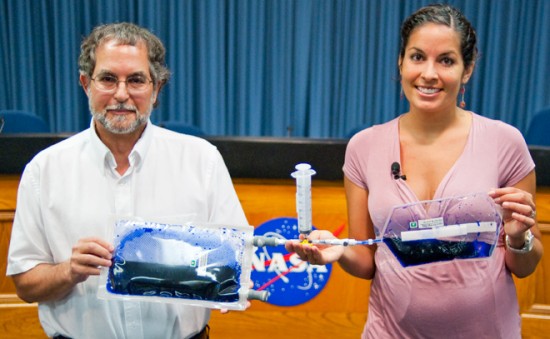 NASA is prepping for the very last flight of the Space Shuttle Atlantis, which will mark the end of the entire Space Shuttle program this week. The crew of Atlantis will conduct a range of scientific experiments, among them (and most notable for the ew-factor) is a baggie-based urine recycling system that may make pee drinkable. Yes, that refreshing beverage, pee.

But before you become completely repulsed, rest assured the astronauts themselves will not be drinking urine. At least not these astronauts, not yet. The test will be conducted with an experimental fluid, to test the ability of established pee recycling systems to work in space. The military already uses a similar technology to filter parasites, bacteria, and viruses out of dirty fluids (including urine) for sanitary reasons.

According to NASA project scientist and experiment leader Howard Levine, astronauts on the International Space Station have been drinking water from a urine recycling machine for several years, but this machine drains power from the orbital laboratory’s limited supply. The space-ready water conversion kit to be tested onboard Atlantis is different because it doesn’t need an external power source. The urine conversion kit relies on the process of forward osmosis.

The experiment will take a sugary solution and inject it into a semi-permeable inner bag nested inside an outer bag. Dirty fluid that’s pumped into the outer bag will slowly pass through the inner bag and into the sugary solution, thus leaving behind its contaminants. On Earth, the kit makes about a liter of sports drink-like fluid in four to six hours.

One of the four astronauts on Atlantis will test the system toward the end of their 12-day mission. Atlantis is scheduled for launch this Friday at 11:26 a.m. EDT. Though the shuttle program is coming to a close, the urine conversion technology could prove very useful for astronauts who will still be traveling to the International Space Station and on future (we hope?) manned missions elsewhere in space.