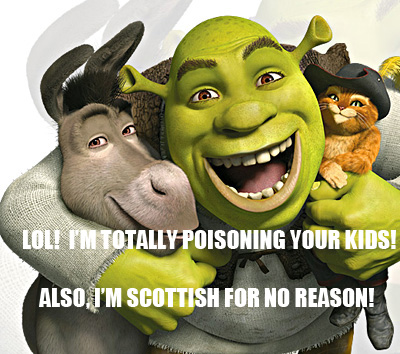 I hate the Shrek movies. I just hate them. In what, at times, seems like a golden age of children’s entertainment (see: every Pixar movie that doesn’t include Larry the Cable Guy), they’re a sharp reminder of just how lazy the genre can be. They have nothing to say, their only purpose is to steal money from indiscriminating parents, they’re marketed based on the actors in them instead of a the characters and story (this is even worse for the rest of the Dreamworks Animation bilge), and, worst of all, they feign “sophistication” by filling the movie with dated and inappropriate pop culture references that are meant to keep the poor adults in the audience from committing mass suicide and traumatizing their children even further. I’ve said it many times; the Shrek movies are poisoning our youth. Now though, it seems they’re poisoning kids literally.

The Associated Press reported last night that McDonalds has been forced to recall 12 million commemorative glasses that the chain had been selling the glasses to promote the latest Shrek masterpiece, Shrek 4: Live Free and Shrek Hard…wait, I mean Shrek 4: The Quickening…oh, no! I mean Shrek 4: Revenge of the Fallen…No, I’ve got it…oh, wait. Hold on. I just spent more time on this post than it took to write the scripts for all four Shrek films put together.

“The fast food chain said early Friday that it wants customers to stop using the 16-ounce glasses, which have been sold for about $2 each and were available in four designs depicting the main characters from the animated movie.

Cadmium is a known carcinogen that research shows also can cause bone softening and severe kidney problems.

In the case of the Shrek glasses, the concern would be long-term exposure to low levels of cadmium, which could leach from the paint onto a child’s hand, then enter the body if the child puts that unwashed hand to his or her mouth.”

To end this post, here is the always funny comic by Gagnon II of Poe News. Click through for the full size. 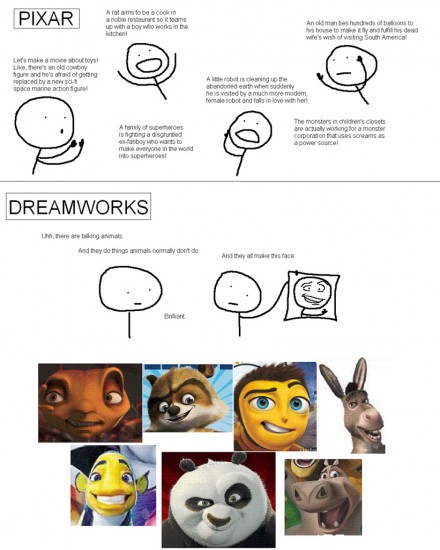