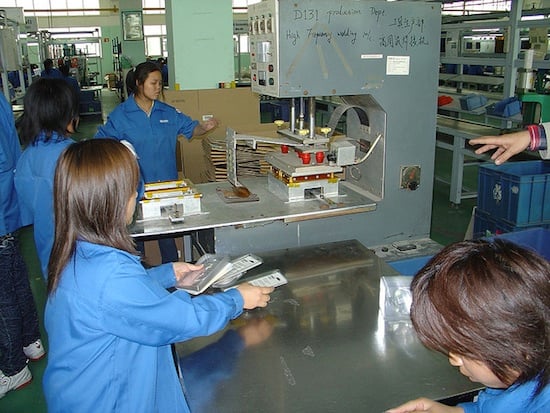 Workers in in the Chinese city of Shenzhen are due for a pay raise next year that could mean higher price on technology products across the board for the rest of us. Located in China’s Guangdong province, Shenzhen is home to factories that supply parts for some of the world’s biggest technology names, including Microsoft, HP, and Apple. Low labor prices in Shenzhen — and in China more generally — are largely responsible for keeping prices on consumer tech low. As those labor prices rise, you can expect the price of your next laptop, tablet, or cell phone to rise with them.

One of Asia’s major technology hubs, Shenzhen already has one of the highest minimum wages in China, with minimum wage workers bringing home about $236 every month. That minimum is set to rise just over 13% at the beginning of next year, to about $268 every month. Presumably, the minimum wage boost will also mean rising pay for workers who are already making more than the minimum as companies look to retain employees.

The city found itself in the spotlight over the last year as the home of the FoxConn plant featured in the news as Apple was forced to defend the working conditions there. It’s also the plant that Mike Daisey might have kind of seen or driven past for his infamously retracted This American Life piece and stage play, The Agony and The Ecstasy of Steve Jobs.

The city has seen a number of worker actions of late — ranging from strikes to full on riots — protesting the low pay, grueling hours, and high-pressure environments that dominate the factories where our gadgets are assembled, and this raise in pay rates is seen largely as a response to that unrest. That money has to come from somewhere, however, and as it’s unlikely that the companies involved will eat the entirety of the increase, you can expect to start shelling out a little more cash for tech gear that’s Made in China in the near future.