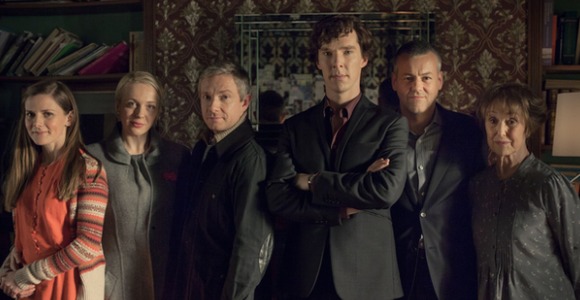 The BBC’s Sherlock finally returned to (UK) television screens last night, after a painful two-year-long hiatus. Despite essentially being the Amy Pond of fandoms, Sherlockians proved that they were still as dedicated as ever to the Cumberbatch/Freeman cause by giving the show its highest ratings of all time for The Empty Hearse.

Airing on BBC One on New Year’s Day in the UK, The Empty Hearse picked up after The Reichenbach Fall‘s nerve-wracking cliffhanger, where Sherlock threw himself off a building to his supposed death. The new episode was ninety minutes long, and 9.7 million viewers tuned in to see Smaug reunited with Bilbo at last (I’m sure this crossover fic exists on the internet somewhere). Though these are only provisional ratings, it looks like The Empty Hearse will be the most-watched episode of TV for the whole holiday in the UK, substantially beating out the 8.3 million viewers who witnessed Matt Smith’s departure from Doctor Who on Christmas day.

“Delighted our loyal audience tuned in on an appropriately bleak and stormy New Year’s night! After two years it’s fantastic to have this response to Sherlock, John and all the team being back on TV. All this and Dr Watson gets married in three days’ time!”

“Thrilling news on overnight ratings for Sherlock. A tribute to the team who work so hard, and with such pride, on the show, and of course to the genius of Sir Arthur Conan Doyle. It’s proof that audiences will show up if you give them what they want – though we can’t throw Benedict [Cumberbatch] off a roof every week.”

He then rubbed his hands together manically, saying, “But I’m Steven Moffat and I can do whatever I want,” before laughing an evil laugh.

Okay, I may have made that last part up, but it’s not totally out of the realm of possibility.

US Sherlockians have to wait another few weeks to see the episode (legally), when it airs on PBS January 19th. UK fans can look forward to episode 2, “The Sign of Three,” on January 5th!