Shelter Is A Tale of Motherhood, Loss, and Survival. It Is Also A Badger Simulator. 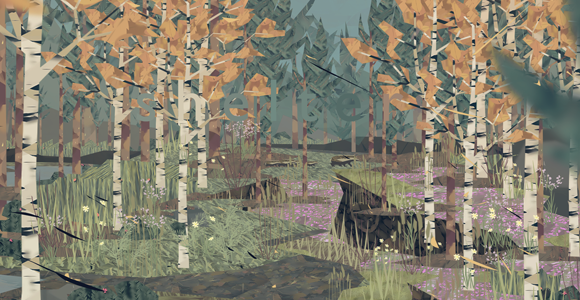 I awoke in my den, surrounded by four yipping cubs — and a motionless one, curled into a ball. Oh god. Two seconds into Shelter, and already I’d failed as a parent. I approached the cub, and gave a bark, trying to wake it. Its siblings responded. The still one did not. At a loss, I walked down a tunnel, wondering what I could’ve done. I came upon a root vegetable. I grabbed it between my sharp teeth, and continued on. But as I tried to walk down the tunnel, I kept balking backward. The game wouldn’t let me leave my offspring behind. I thought for a moment, and returned to the lifeless cub. I offered the vegetable. My cub wolfed the tuber down, and color returned to its fur. It got to its feet, and trotted along after me.

A voice appeared in my head, cutting through the game’s mellow soundtrack. “Having successfully learned to feed her cubs, the young mother can now venture into the forest.”

“I’m Sir David Attenborough,” the voice said. “I will be providing your imaginary narration.”

As a badger, my options were limited. I could grab vegetables. I could knock apples out of trees by ramming the trunks. I could run. I could crouch. And…that was it. My evolutionary path had not led to opposable thumbs and symbolic speech. I could not tell my babies to stay put, or explain to them they needed to share their food. A vegetable or an apple will only feed one, and when the cubs clamber over one another, it’s tough to enforce who gets to eat. As the game has no UI, I wondered how I would know if one of my cubs was going hungry. I soon had my answer, and it was the worst thing ever.

Without food, the cubs fade to gray.

“Desperate to feed the runt of her litter,” Sir David Attenborough said, “the young mother decides to risk going after a more substantial source of protein.” He paused with weighted importance. “A field mouse.”

I have spent countless hours of my life getting frustrated with inexperienced predators in nature shows. How many times have I watched a cheetah fail to catch a gazelle, all because it couldn’t find the right timing between stalk and chase? How many times have I scoffed, “Oh, come on, just get it”? I take it all back. Catching prey is an art. If I crouched too long in the bushes, the mouse would wander off. If I started running too early, the mouse would hear me coming, and dive into the safety of its burrow.

After several bad attempts, I emerged the victor, with a warm, dead rodent dangling from my mouth. I turned to my cubs, flush with success — and realized my mistake.

I ran much faster than a baby badger could. In focusing on catching the mouse, I had forgotten to turn an eye back toward my cubs. They were still running to catch up after I’d made the kill. And one was missing. The one I’d been trying to feed.

Frantic, I ran back the way I’d came, attempting the impossible task of retracing the zigzagged path I’d made after the mouse. I barked, again and again, hoping to hear five replies instead of four. The forest stretched out around me. My cub could be anywhere. Finally, I found its gray, still body, curled up beside a bush. I gave it the mouse, ignoring the hungry yips of its siblings. It fed.

“At last, the family is reunited,” Sir David Attenborough said, his plummy voice relieved. The game congratulated me with the strum of a guitar, and I continued on, feeling like the top of the food chain.

Badgers are not the top of the food chain.

Though Shelter follows a linear path, each player’s experience will vary depending on how well food can be found, or dangers avoided. Sometimes the threats were obvious — the stylized shadow of a raptor, the swell of a raging river. Other times, tragedy struck without warning. I was a badger, after all. They’re not known for their powers of perception.

“I lost one of my babies,” I said into the phone, answering my partner’s call without a hello. “It’s dark, and something growled, and all my babies ran away, and I found them now, but one’s missing. Something ate my baby.”

“I…will talk to you later,” she said.

It happened again, as I ran through the night. A growl, an impact, a scattering. I was down to three. Defeated, I walked into the safer light of morning. My remaining cubs were hungry. I searched for vegetables. There was nothing more I could do.

“With two less mouths to feed, the young mother has an easier time providing for her brood.”

“Shut up, Attenborough,” I said bitterly. But my on-board naturalist was right. My babies went gray less often. They grew fat and healthy. Before long, they were almost as big as me. When had that happened? I chided myself before I could finish thinking the phrase they grow up so fast.

Rather than anthropomorphizing, Shelter strips motherhood down to its biological essentials — food, safety, survival. My cubs did not have names or personalities. I cannot say if they loved me, or I them. But they needed me, and I would not — could not — abandon them. When I fed one, I would inwardly console the others: I know, I’m sorry, it’s your turn next. When I ran into bushes for cover, I’d anxiously turn to watch them follow, urging them onward — run, run, you can do it, I know you can do it — then sighing with relief, and pride, as their tiny legs carried them out of harm’s reach. The ending, though somber, left me with an odd sense of hope. No matter what happens, life goes on.

The presentation of the game displays a commendable degree of care. The impressionistic artwork is gentle and appealing (I particularly enjoyed the night sky), and the acoustic soundtrack pairs nicely with the sounds of the forest. That said, Shelter is not a game for everyone. A playthrough takes no more than two hours, and wandering the woods in search of vegetables and hiding places has a niche appeal, no doubt. But if you enjoyed explore-and-look-at-stuff games like Flower, Journey, or Proteus, or if you just love the great outdoors, Shelter is a thought-provoking experience worth your time.

“Mother Nature is not forgiving,” my imaginary narrator said, as the credits rolled. “But neither is she cruel. She simply is.”

Shelter is available for Windows and Mac. It can be purchased through Steam or its official website.