She’ll Be Back: Linda Hamilton Returning to the Terminator Franchise For Planned Trilogy 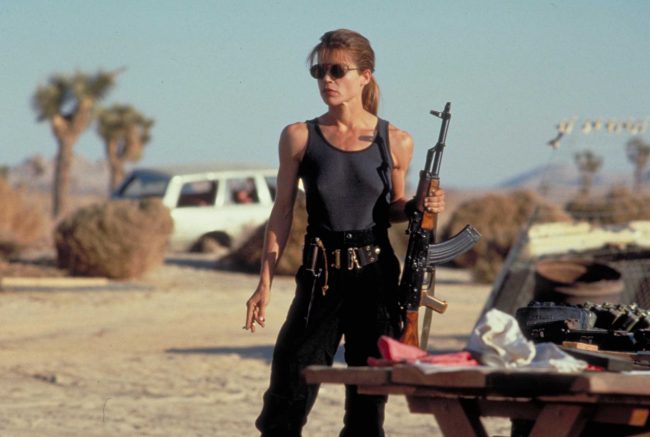 After the franchise flop-fest culminating in Terminator: Genisys, James Cameron is returning to the Terminator franchise to oversee an all-new trilogy of films that would give a proper ending to the Humanity vs. Skynet conflict. We’ve now learned that another very important piece of the Terminator puzzle is returning. Ladies and Gentlemen, Linda Hamilton—A.K.A. the OG Sarah Connor—is back!

Hamilton will be reprising her iconic role alongside Arnold Schwarzenegger and returning franchise co-creator James Cameron (the other creator of the Terminator franchise is, of course, the badass Gale Anne Hurd). While the films will be based on a story by Cameron, and he will likely have some input in the writing, they will be planned and written in a writer’s room including David Goyer, Chris Eglee, Justin Rhodes, and Josh Friedman.

The trilogy, or at least the first film for sure, will be directed by Deadpool‘s Tim Miller.

When Cameron announced the news at a private event, he said, “As meaningful as she was to gender and action stars everywhere back then, it’s going to make a huge statement to have that seasoned warrior that she’s become return. There are 50-year-old, 60-year-old guys out there killing bad guys, but there isn’t an example of that for women.”

Hey, don’t let Helen Mirren (A.K.A. Victoria Winslow in the RED series) hear you say that. She was in her late 60s when she last played that role. But yes, point taken. It would be awesome to see another woman over the age of 60 playing a hardcore action role, as so many men do (some past the point of belief).

What gets me about this is that, even as Cameron talks about Hamilton’s involvement as being important for women, none of the announced creative voices on the team are female so far. Male director, all-male writer’s room (so far), and Cameron overseeing it all, despite the fact that Hurd was instrumental in the first Terminator film (even though Cameron is quick to dismiss her contribution by emphasizing that her screenwriting credit doesn’t mean she actually did any writing on the script. No, she just fixed it.)

I really wish that men in Hollywood would actually include women in the process, not simply have one or two important women scattered around and surround the with dudes. That would be really great.