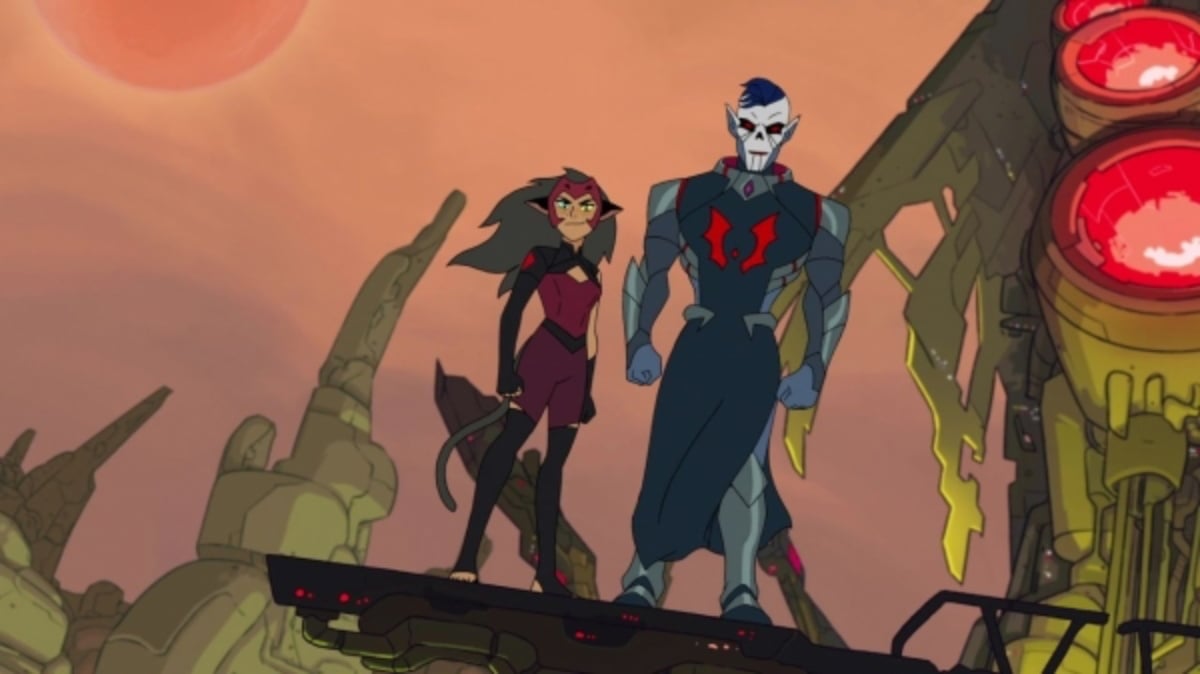 One of the best and most thoughtful shows out right now is She-Ra and the Princesses of Power (a.k.a. one of the handfuls of reasons I keep my Netflix profile). Creator Noelle Stevenson has crafted a thoughtful series about friendship, morality, and the cycle of trauma. With each of the characters, Stevenson has managed to explore how one becomes a villain, but also holds each character accountable for their actions. and season four raises the stakes, emotionally and thematically, along that thread.

**Spoilers for season four of She-Ra and the Princesses of Power.**

The recent fourth season really challenged our understanding of a lot of characters. In many ways, it deepened already existing issues that characters had—namely Gilmmer, Bow, and Adora—but it also gave us Scorpia recognizing that Catra was being a bad friend, Catra getting read to filth by Double Trouble about how her bad behavior pushes people away, and even Hordak got moments of emotional vulnerability despite being a warlord.

For me, this was one of Catra’s best seasons as a character. Noelle Stevenson and A.J. Michalka have both said that Catra is going further down this dark path because she doesn’t know what else to do. She’s already lost Adora, Shadow Weaver, and others and feels like it all must be worth it if she wins. Yet, as she “wins” while pushing Scorpia, the last person who really loves her, away, we see that Catra isn’t winning. She’s just pretending to be the bad guy because it’s easier than being a failure.

For me, this is the storyline Azula should have gotten in Avatar: The Last Airbender. It’s not rushed, and it feels earned based on the last four seasons.

We do get Double Trouble having to give her a full verbal beat down as they transform into Shadow Weaver, Hordak, Adora, and Scorpia, exposing that, in the end, Catra not only lost the war, but everyone she wanted to care for her in the process. She can’t stop lying, she can’t stop manipulating, and it has all caught up with her. We feel pity for her, and we understand why she is this way, but She-Ra holds Catra accountable.

She has waged war and destroyed villages and entire kingdoms. Her abuse may be the reason, but it’s not an excuse, and while Horde Prime’s arrival has switched up the hierarchy of baddies, and it looks like Glimmer and Catra will have to team up, she still has a long way to go.

Another person whose “redemption” comes up within fandom is Hordak himself, mostly because, in the past two seasons, his friendship with Princess Entrapta has shown layers of vulnerability. We found out that Hordak is a damaged clone who was abandoned and did all of this as a way to prove himself in the eyes of his “brother,” Horde Prime. Cool motive, still an imperialist dictator.

At the end of “Destiny, Part One,” he cries, finding out that Catra lied about Entrapta betraying him, and he feels betrayed by Catra, who is pretty much another version of himself. As a clone born to serve and conquest, Hordak is, in many ways, a “child soldier” himself. This was all he was born to do, and with Entrapta, it was a time where he was defined by someone who didn’t view him as a flaw.

When he is confronted by Horde Prime, the elder brother yells at Hordak for giving himself a name and says “there was a time when you wished I would not come for you” while touching the collar of the armor Entrapta made for him. Prime then disables him and has him dragged off to be “reprogrammed.”

When we talk about villainy, especially villains we like or find ourselves attracted to, there is always this need to justify it. Yet, the biggest mistake with loving damaged characters is assuming that we need them to be redeemed because how else can they be worthy of love? Goodness is not a prerequisite for love. Hordak may absolutely love Entrapta, but loving someone doesn’t mean you get redemption right away. Hordak, if anything, has space to atone, but there is also space to say that showing goodness to one person does not a redemption narrative make—even if I enjoy and, yes, I do ship it. What about it?

Hordak actually reminds me a lot of Vegeta from the Dragon Ball franchise, and Vegeta’s atonement took decades. It took him two versions of his own kid and being with Bulma for eight years to finally get his shit somewhat together, and he still relapsed into being bad because his sense of self was so deeply warped from Freeza that it’ll never fully change. Hordak, may never fully change, but giving him these layers doesn’t mean he is going to or needs to. What it does so is explore how evil is shaped.

Horde Prime created Hordak and his whole Horde army to destroy worlds. Hordak then took that in exile, along with all his insecurities, and passed those along to Shadow Weaver, who then brought them to Catra.

It’s great storytelling, and I can’t wait to see how the She-Ra crew will bring everything together in season five.

What were your favorite moments from this season of She-Ra and the Princesses of Power?