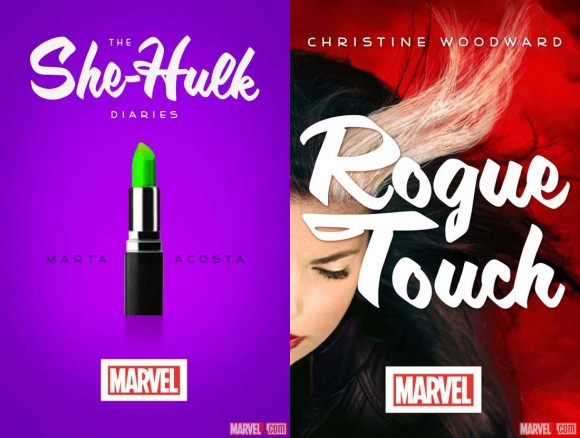 What’s this? A new partnership between Hyperion Books and Marvel Entertainment?! Yes. She-Hulk and Rogue star in their own novels coming this June.

These are the synopses for the novels according to Marvel.com:

She-Hulk, Marvel’s much-beloved comic book heroine who shares her cousin Bruce Banner’s ability to transform into a hero of incredible power, comes to life in a page-turning novel. In The “She-Hulk Diaries,” Jennifer Walters, aka She-Hulk, juggles climbing the corporate ladder by day and battling villains and saving the world by night—all while trying to navigate the dating world to find a Mr. Right who might not mind a sometimes-very big and green girlfriend.

The second novel, “Rogue Touch,” features one of the most popular X-Men characters, Rogue, a young woman trying to navigate the challenges of everyday life and romance—except that her touch is deadly. After accidentally putting her first boyfriend in a coma, she runs away from home where, she meets the handsome and otherworldly James and sparks fly. Like Rogue, however, James’ life is hardly simple. To elude his mysterious and dangerous family, James shaves his head, dons all black. Stealing a car, they head out on the highway and eventually, Rogue has to decide whether she will unleash her devastating powers in order to save the only man alive who seems to truly understand her.

The She-Hulk Diaries is written by Marta Acosta while Rogue Touch was done by Christine Woodward. “In addition to threats to the universe, She-Hulk and Rogue have challenges that women readers know well, including finding the right guy. Our heroes are real people first and super powers second, which is why fans connect with them,” Hyperion editor in chief Elisabeth Dyssegaard told USA Today. “These books delve into what happens if dating challenges also include turning huge and green or having a lethal touch, offering readers a unique perspective on superpowered high drama.”

I’m sure the heavy lean on romance might turn some people off but I think this is a, ahem, novel idea for the brand. The information I’ve seen so far doesn’t specify the target audience but Hyperion obviously has women in mind.

“The X-Men franchise is very popular with both men and women, so choosing a character like Rogue plays to that existing female fan base while also attracting new readers,” said Dyssegaard.