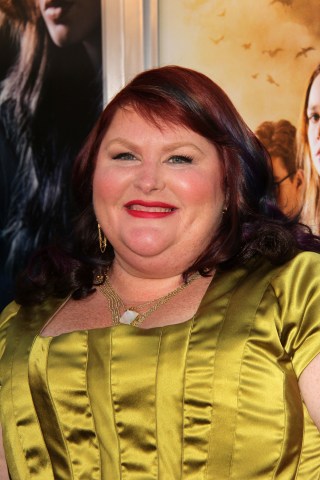 Clare is known for her Shadowhunters franchise, comprising, among other things, two series of novels, the 2013 movie The Mortal Instruments: City of Bones, and now a Shadowhunters TV series airing on Netlix in the UK and ABC Family in the U.S.. Kenyon is suing Clare for lost profits she says were caused by Clare willfully copying the Dark Hunter series, and her lawsuit claims that “in many respects” the elements of both book franchises “are virtually identical.” Rather than accusing Clare of plagiarizing prose from Dark Hunters, the suit instead focuses on thematic resemblances, including the similarities between the terms “Shadowhunter” and “Dark Hunter”:

Both the Dark Hunter series and the Shadowhunter series are about an elite band of warriors that must protect the human world from the unseen paranormal threat that seeks to destroy humans as they go about their daily lives. These hunters, whether ‘dark’ or ‘shadow,’ preserve the balance between good and evil, protecting humans from being consumed or enslaved.

As Entertainment Weekly points out, this isn’t the first time there’s been controversy over similarities between the two series–in 2006, Kenyon’s fans alerted her to Clare’s use of the word “darkhunter” in her work. Clare responded by replacing “darkhunter” with “shadowhunter” and removed, to quote the lawsuit, “any reference to “hunter” (whether “shadow” or “dark”)” from the title of The Mortal Instruments: City of Bones.

Still, the lawsuit says that despite “continuous assurances from Clare and Clare’s publisher that she/they would not expand the use of the ‘shadowhunters’ term or adopt it as a trademark, Clare has persisted over time in expanding her use of the term ‘shadowhunters’ from a mere description of her protagonists, first to a tag line on the cover of her works and eventually to a complete rebranding of her works so as to be confusingly similar to the Dark Hunter series.”

The suit also cites a publishing fiasco as evidence of thematic similarities between the two series:

Additionally, the suit claims that “the Shadowhunters symbol used by CLARE on book covers and promotional materials is essentially a simplified version of PLAINTIFF’s Dark-Hunter symbol.”

In a statement sent to EW and other outlets, Clare’s lawyer John Cahill says his client is “surprised and disappointed” by Kenyon’s allegations.

Cassie was both surprised and disappointed that Ms Kenyon would file this baseless lawsuit, a decade after the debut of Cassie’s books …

Tellingly, the lawsuit failed to identify a single instance of actual copying or plagiarism by Cassie … There is little chance of anyone confusing Cassie’s young adult themes and orientation with the sometimes very adult storylines in Ms Kenyon’s books. Indeed, we expect that all of Ms Kenyon’s claims will be dismissed.

Cahill feels that the suit rests on “a basic misunderstanding of copyright law and Cassie’s totally original work […] For instance, Ms Kenyon complains that Cassie stole her idea to use ‘normal objects … imbued with magical properties such as a cup, a sword, and a mirror,’ but those ideas and many others to which Ms Kenyon lays claim have long been part of our storytelling tradition from ancient times to the present.”

The case has attracted attention from many fans and writers online, including author and former IP lawyer Courtney Milan, who uploaded the suit to her website and pointed out that “if you could copyright ideas, nobody would be able to write anything. Ever.” Other fans have taken issue with the suit’s claim that the Shadowhunters symbol used on book covers and promo materials is “essentially a simplified” Dark Hunter symbol:

Ok but this is NOT EVEN the DH’s symbol? DH’s symbol is the double-bow. Jaden’s a minor character? pic.twitter.com/zEApifVRhT

YA fandom site YAInterrobang also argues that Dark Hunter and Shadowhunters are both inspired by universal tropes that can be found in many genre novels, and cites “Courtney Moulton’s Angelfire, Melissa Marr’s Wicked Lovely, [and] Julie Kagawa’s The Iron King” as just a few of the many examples of authors who have relied on some of the same tropes as Clare and Kenyon.

For some fans, this suit may also call to mind previous controversies surrounding Clare; including accusations of alleged plagiarism and cyberbullying within the Harry Potter fanfic community. However, as YAInterrobang writes, “her history in fandom has nothing to do with the case, hence why it is not mentioned in the court documents.”

The Mary Sue reached out to Kenyon and Clare for comment but has yet to hear back.

(via The Guardian, image via Shutterstock)