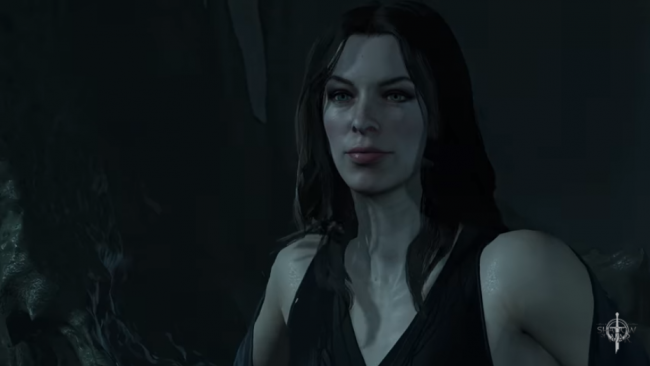 “She served none but herself, drinking the blood of Elves and Men, bloated and grown fat with endless brooding on her feasts, weaving webs of shadow; for all living things were her food, and her vomit darkness.”

Oh…did that description not make you think of a thin lady in a slinky black dress?

The new Lord of the Rings game from Monolith, Middle-earth: Shadow of War, will feature an uneasy alliance between its protagonist, Talion, and the giant spider Shelob, whom you may remember from her encounter with Frodo and Sam in the Two Towers book or Return of the King film. But Shelob will be “assuming the form” of a humanoid woman for most of the interactions, which is…a choice.

As Jim Sterling of The Jimquisition asks in the below video, “Was it really too much that Shelob could be the ugly evil spider that she is, and stay that way?…Do we really need to sex up giant spiders in order to make them interesting? If they’re spiders with even a hint of the feminine, the answer is apparently ‘yes.'”

“I cannot, surely, be the only one who finds working with an actual giant spider far more fascinating than working with a spider who’s ‘assumed the form’ of a factory-standard dark sexy lady,” Sterling continues. “It hammers home the idea that woman characters can’t be interesting unless they’re attractive to the audience, and I think that’s a shame – because, to take a stand for equality here, women can be eight-legged, slobbering, unrepentantly evil arachnids, too.”

Here’s the thing: I totally understand why Shadow of War would want to expand Tolkien’s world to include a more manipulative, active female character. But this character design is so…generic. As Sterling summarized, “The direction taken with Shelob is pretty much the least imaginative direction you could hope to take…There are loads of engaging and interesting things you could do with a massive, sentient spider. Sexy Shelob isn’t one of them.”

It’s not like this choice enrages me, particularly since it adds more women to Tolkien’s male-heavy world. It’s more like it…puzzles and frustrates me. When we talk about escaping sexist and racist narratives in our games, we’re first and foremost concerned with avoiding real-world harm to marginalized people – but this is a perfect example of how we’re also talking about making good art. Sexy Shelob really is just a dull idea that doesn’t make sense for the juice-sucking monster we’re all familiar with. And if the game studio had allowed themselves to think outside the sexist box, they could’ve come up with something far more engaging.

(Via Rock, Paper Shotgun and The Jimquisition; image via screenshot)