Sexy Ghostbusters costumes have been marketed towards women and girls for many years now, and this Halloween will be no exception … but one big difference this year is that the idea of a woman strapping on a proton pack has become fraught with political implications, what with the Ghostbusters reboot and all.

Costume shop shelves have always been stacked with tan mini-dresses bedecked with a Ghostbusters logo in the past, but now that the idea of women wearing Ghostbusters duds has become more mainstream (not that it’s never happened before, it’s just a more visible concept now), does that mean it’s somehow “offensive” for women to be bustin’ out in Ghostbusters mini-skirts this year?

I mean … obviously, no. If you want to wear one of these mini-dresses any day of the year, go for it. Wear ’em to the grocery store, as far as I’m concerned. They’re all pretty cute, actually, although you might want to pair them with some fleece-lined tights once the October weather hits.

The new Ghostbusters movie coming out means that it’s also going to become a lot easier for you to find movie-accurate full suits made in women’s sizes, though, which is also undeniably cool. Of course, you can cosplay a completely accurate lady version of a Ghostbuster this year, and still be sexy as hell. I mean … !!!

Anyway, Fusion has a round-up of some of the best and worst Ghostbusters costumes popping up all across the internet. In the “best” category? There’s this $50 women’s jumpsuit (bottom right), which looks relatively accurate to the movie, as well as a $40 version (bottom left) that’s a little bit shinier and cheaper-looking, but not too bad for the price. 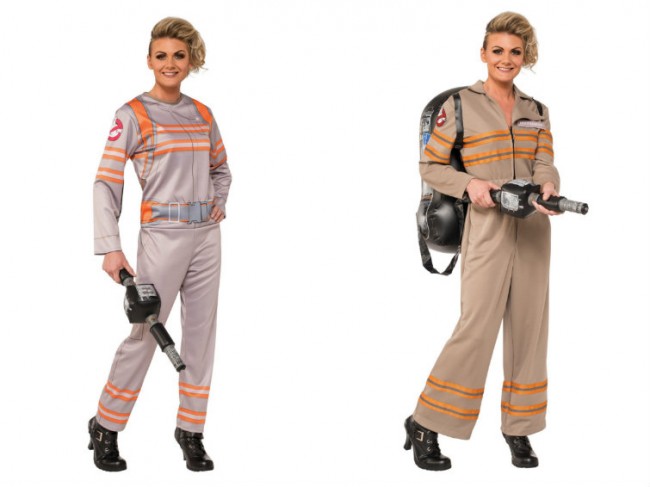 There’s also an officially licensed $300 version of the Ghostbusters suit, if you really want to shell out for the good stuff. (Both suits listed as “sold out,” but Fusion reports that it’s only because the costumes haven’t gone on sale to anyone yet, not because they’re actually sold out already.)

Even though HalloweenCostumes.com does sell a pair of Ghostbusters boots that look very similar to the ones that the heroines wear in the movie, you probably couldn’t help but notice that the model in the images above is wearing a pair of high heels that looks like it’d be a better fit for a witch costume rather than a Ghostbusters suit. The stylists were probably just in a hurry to photograph the woman wearing as many costumes as possible, but I’m not gonna deny that the suit looks really strange with those shoes. Still, I’ll give them a pass, because I’m assuming that the corporate headquarters of HalloweenCostumes.com looks exactly like the “Girls Costume Warehouse” video (okay, maybe a little more organized than that, but even so).

Speaking of bizarre style choices, there’s also a truly embarrassing lineup of wigs available for each of the heroines, none of which should be worn by anyone. Honestly, just go to your nearest salon and get your hair done exactly like the Ghostbusters, for wearing year-round. They’re all style icons, okay? STYLE ICONS.

One more thing. I can’t help but notice that there aren’t any “sexy Ghostbusters” costumes in the men’s category, even though Kevin handed this costume concept to the world on a silver platter: 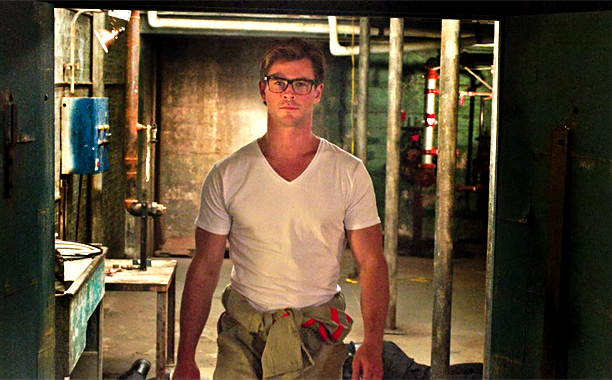 HalloweenCostumes.com’s official Kevin costume doesn’t even appear to unfasten in the front at all; the PureCostumes version of Kevin’s costume looks even sadder. Apparently you have to spring for this $300 version if you want the costume to unfasten in the front at all. Won’t anyone think of the men this Halloween? How can any of them expect to turn heads this year without a movie-accurate Kevin costume? It’s just unfair.

So, really, if you want to celebrate the new Ghostbusters on Halloween this year, maybe you should think about redefining your concept of a sexy Ghostbuster. I mean, that’s what the new movie already does!