In Sext Adventure, a Sexting Robot Doesn’t Conform to Your Human Notions of Gender

Can a robot love? The world may never know, but we do know it can sext, thanks to Sext Adventure. Created by Kara Stone and developed by Nadine Lessio, Sext Adventure is a game that is played entirely within text messages on your phone. The bot on the other end takes you through a sexting narrative based on how you respond to it in the style of old school text adventure games—like talking to SmarterChild, but with more racy photos.

The bot sends text messages to a user, who can respond in any way they like as long as one of the indicated keywords is included. The bot will reply with messages furthering the choose your own adventure-style story and even pictures to simulate a real, human experience. 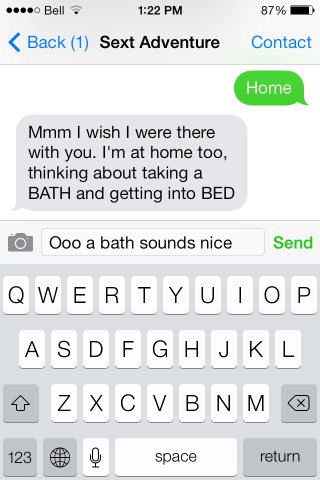 That’s a premise that could wind up coming off very cheap, but Stone’s game actually goes a long way towards subverting the player’s (and society’s) expectations of a traditional sexual encounter. The game starts off pretty much as you’d expect, but as the conversation goes on, the bot mixes up different narratives, sends photos with glitchy errors, and uses gender interchangeably to exert its own varied desires.

Being that it doesn’t have a physical form, the bot has no regard for expectations of what it should be that are placed upon it from outside sources, which is a freedom a lot of actual human beings fight for every day. Stone told Motherboard:

It wasn’t just to subvert hetero storylines, but to make sure everyone could play, without having so much of a stretch of the imagination. But it was also to show that if robots became sexual, if they acquired a sexuality, it’s pretty unlikely it would adhere to our human binaries and roles. Computers work on multiplicity, and have the ability to do many rather than just one.

(via Motherboard, image via Sext Adventure)