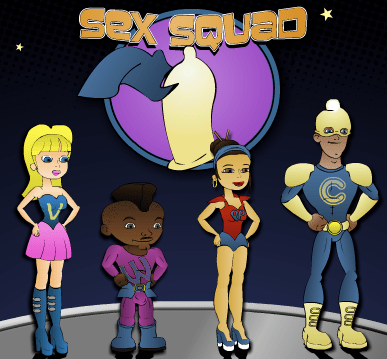 If Sex Squad was just another Newgrounds.com game, what with its endless sexual puns and Flash graphics and the presence of a protagonist who is actually named “Wonder Vag,” it’d hardly be worth mention, and might be cause for mild embarrassment.

But here’s the thing: it’s actually a (Canadian) government issue game, backed by the Middlesex-London Health Unit in Ontario, the purpose of which is to educate young adults and teens about sexually transmitted infections. Sex Squad does this, of course, by having a steroidal wrestler with penises for hands shoot shark-shaped sperm at the player as they answer true/false questions.

In Adventures in Sex City players can assume the role of one of the four superheroes who make up the Middlesex-London Sex Squad:

– Captain Condom, a scientist, who, after a freak lab accident is now half man, half condom;

– Power Pap, a sexually active woman who believes strongly in getting tested regularly;

– Willy the Kid, because he never grew taller than four feet, he joined the Sex Squad to prove that size doesn’t matter;

– Wonder Vag, a virgin who believes in true love and promotes abstinence until marriage.

By answering sexual health questions correctly, players can defeat the evil Sperminator, who threatens to infect Sex City. While playing the game, players can click on the Myth Maniac, a mysterious ally of the Sex Squad, who demystifies commonly held beliefs and myths about sexual health.

Rock Paper Shotgun: “As a game, it’s just a tedious collection of yes/no questions. As a spectacle, it’s beyond words … I rather fear its creators were so busy amusing themselves by seeing how many sex gags public funding is prepared to cover that the educational element got kinda lost.”

If you’re still interested, you can play the Sex Squad’s Adventures in Sex City — which we can only hope is the first of many Sex Squad installments and expansion packs to come — on the Middlesex-London Health Unit’s website.