The show premieres tonight on AMC. 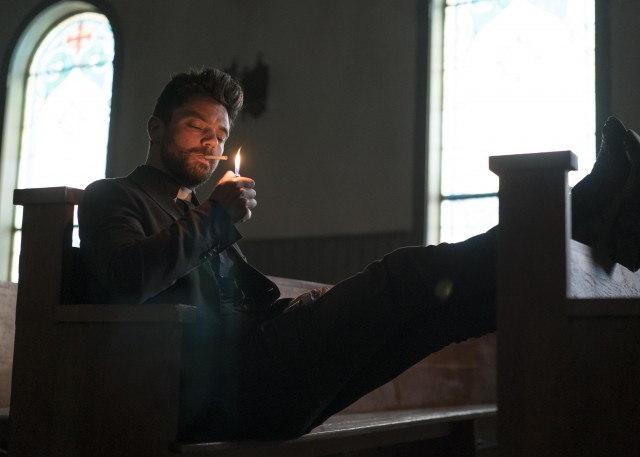 Longtime friends and collaborators Seth Rogen and Evan Goldberg have primarily been known for their comedies–Superbad, Pineapple Express and This Is The End, to name some examples. That’s why I was particularly intrigued by the news that they were going to be adapting the comic book series Preacher for television. As of right now, the show’s been picked up for a ten-episode order at AMC–but it’s already getting rave advance reviews, and it wouldn’t surprise me if AMC decides to greenlight it for a second season after the pilot airs depending on ratings.

In a press interview, Rogen and Goldberg sat down to talk about the road to adapting Preacher–Rogen explained how it was actually during the making of Pineapple Express that they first wanted to put their names in consideration to bring the series to television:

We were just kind of like picking up some momentum as writers. And so, we were like, ‘We’re writers now! We’re making an action comedy! Maybe they’ll let us do Preacher!’ I remember we actually showed them the fights from Pineapple Express in Danny McBride’s house, to show them that we could execute action… and I think they were like, ‘Oh, OK.’

Goldberg added that their initial vision for the series was something like “a Band of Brothers, kinda 10-part miniseries”, since it didn’t seem possible to cram all the important story in to one long feature film. Both Rogen and Goldberg credit the current iteration of cable television and the storytelling barriers that had already been broken down because of The Walking Dead with giving them more freedom to make their Preacher adaptation as faithful as possible:

Rogen: If anything, I’m surprised at what we’ve been able to do.

Goldberg: I think we’re old enough to permanently be shocked by everything they let us do. It’s like, ‘You couldn’t do that shit when we were kids!’ It’s crazy! The Walking Dead is insane!

Rogen: Yeah. The Walking Dead actually has provided a lot of good precedent for us to do a lot of stuff that we wouldn’t be able to do. [laughs]

For more on Rogen and Goldberg’s journey in adapting Preacher, including star Dominic Cooper’s ability to pull off an American accent and how Superbad inadvertently drew inspiration from classic Western movies, you can read the whole interview over at Comic Book Resources.