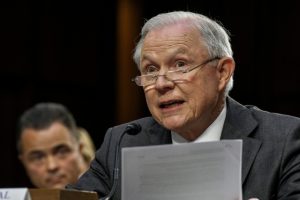 Attorney General Jeff Sessions is not a man on the frontline of Civil Rights. From the moment he was appointed, it was clear that the hard-line conservative was not going to be supportive of the same LGBTQIA laws that we’ve worked to gain. Which is why it was surprising when the New York Times reported that the Justice Department has sent a hate crime lawyer to Iowa to prosecute a man who murdered a transgender teen.

This is an odd decision considering Sessions has rolled back protections for the transgender community. Earlier this month he rebuked the idea that Title VII protected transgender people, dismantling a protection the Obama era had put into place.

“Title VII’s prohibition on sex discrimination encompasses discrimination between men and women but does not encompass discrimination based on gender identity per se, including transgender status,” Mr. Sessions wrote in a memo obtained by Buzzfeed news that was sent to federal prosecutors.

It is also very rare for the Justice Department to assign its lawyers to serve as prosecutors, so it is hard to fully understand the implications of this decision. Devin O’Malley, a spokesman for the department said that this was an example of Session’s commitment to “enforcing the laws enacted by Congress and to protecting the civil rights of all individuals.”

Again, suspect because Sessions has spoken against gay marriage and expanding federal hate crimes to transgender people, while at the same time praising the strict prosecution of another hate crime in Mississippi.

“No person should have to fear being violently attacked because of who they are, what they believe, or how they worship,” Sessions said.

In these times, constant vigilance is necessary and it is important to continue to hold Sessions accountable for saying one thing and doing another. However, it is important that the murder of Kedarie Johnson, a gay, non-binary, person of color, gets justice for being stripped of their life’s potential.

In the initial local news reports of Kedarie’s death, Lt. Jeff Klein was reluctant to name it a hate crime because under Iowa Code it didn’t qualify as such. “We are only five days into the investigation, and we will not have a knee-jerk reaction (to the several theories) as to the motive for Kedarie’s death,” he stated to Hawk Eye, the local news outlet.

If Sessions’ actions can get justice for Kedarie, then it will at least be a small victory for Kedarie’s family.

(via The New York Times, The Hawk Eye, image: Shutterstock)