Serena Williams, Naomi Osaka and the Devastating Double Standards Against Women in Sports

When racism and sexism win, everybody loses. 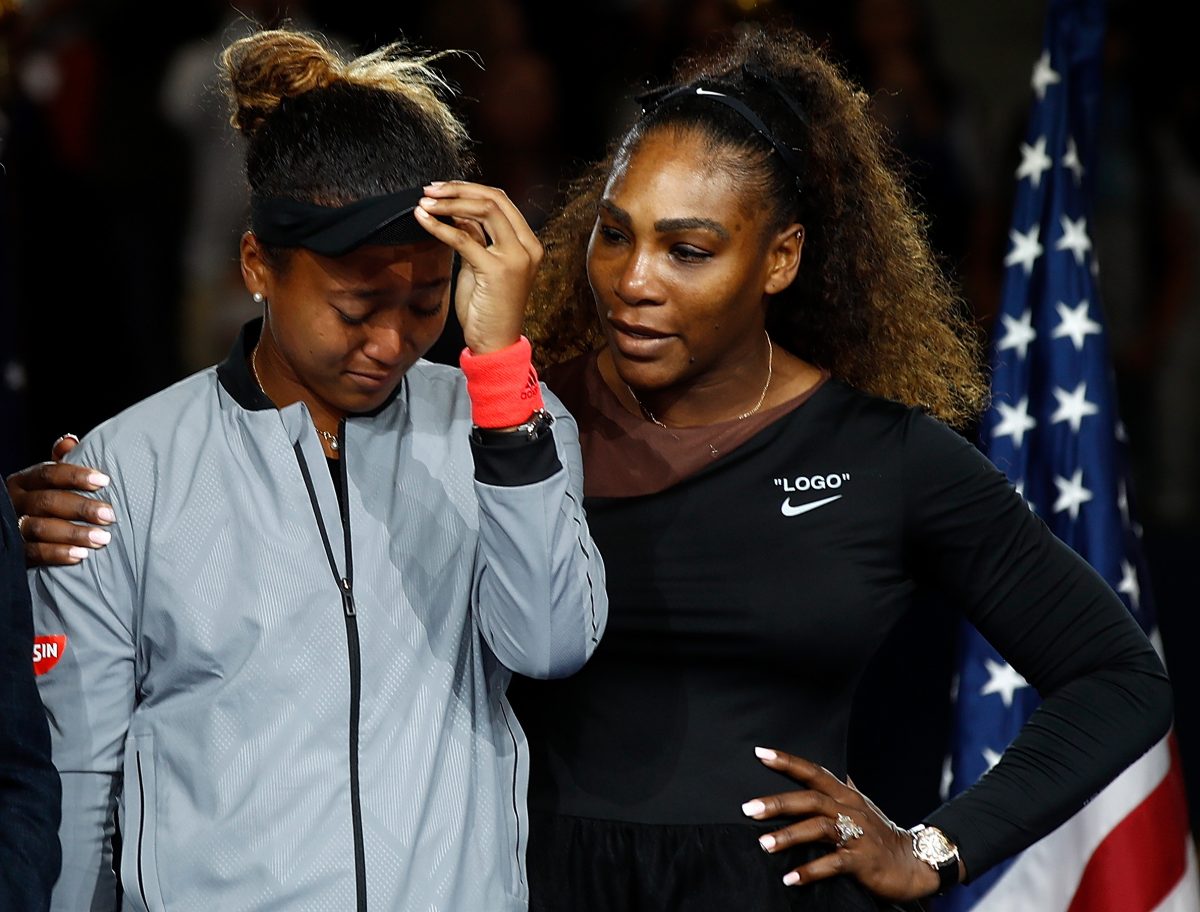 In a devastating finale at the U.S. Open last night, Serena Williams lost to rising star, Naomi Osaka. This was the twenty-year-old Osaka’s first ever Grand Slam, one that she won against her idol no less. But the event was tarnished by the outrageous behavior of chair umpire Carlos Ramos, who quickly became an avatar for the relentless racism and sexism that Williams and countless other female athletes have been forced to endure.

Williams has already endured countless obstacles this season, from losing her seeding due to her pregnancy, overcoming drastic health complications from her birth, and then having her medically necessary catsuit deemed unacceptable by French tennis officials.

After a stellar performance at the U.S. Open, the final showdown between Osaka and Williams should have been celebratory moment of two powerhouse athletes facing off. But things quickly took a turn when Ramos issued Williams a code violation for “coaching”, i.e. getting hand signals from her coach Patrick Mouratoglou. This is such a common occurrence in tennis, so much so that Williams voiced her displeasure to Ramos. She was passionate in defense of herself, saying “I don’t cheat to win. I’d rather lose.”

"You owe me an apology!"

Serena was fired up with the official in the final set of the US Open final. pic.twitter.com/r6RSbrirnV

Williams then received a point penalty for smashing her tennis racket, and then a third code violation for verbal abuse after Williams called him “a thief” for taking her point. As the match went on, you could see Williams becoming more and more frustrated with the situation. Tearing up while talking to Women’s Tennis Association supervisor Donna Kelso, Williams said, “You know how many other men do things — they do much worse than that. This is not fair, there’s a lot of men out here that have said a lot of things and because they are men that does not happen to them.”

Serena Williams’ tears of frustration are viscerally familiar to women everywhere (and especially to women of color) of the righteous anger and rage that comes with being treated and punished unfairly. Is it any wonder that, after the myriad abuses Williams has suffered from tennis officials, that she has finally lost her temper?

This treatment is especially galling considering that male tennis players have gotten away with much worse behavior for years. John McEnroe had a long and storied career of cursing out officials, throwing his racket, verbally attacking his opponents, which made him famous as the bad boy of tennis. Roger Federer repeatedly cursed at a linesman, saying, “don’t f*cking talk to me.”

People were quick to call out the double standards in the match, like tennis legend Billie Jean King:

(1/2) Several things went very wrong during the @usopen Women’s Finals today. Coaching on every point should be allowed in tennis. It isn’t, and as a result, a player was penalized for the actions of her coach. This should not happen.

(2/2) When a woman is emotional, she’s “hysterical” and she’s penalized for it. When a man does the same, he’s “outspoken” & and there are no repercussions. Thank you, @serenawilliams, for calling out this double standard. More voices are needed to do the same.

When Osaka won the match, there were boos from the audience over what they perceived to be a series of unfair calls. She was in tears, clearly upset to beat one of her heroes in such a fraught situation. Williams, ever the professional, comforted her opponent and urged the crowd not to boo saying, “I just want to tell you guys she played well and this is her first Grand Slam. Let’s not boo anymore. We will get through this. No more booing. Congratulations, Naomi.” It was a devastating moment for both players: Serena for her unfair penalizing and Osaka for having her first Grand Slam tarnished in such a cruel way. That Serena performed the emotional labor of lifting her opponent up and celebrating her is a testament to her sportsmanship and her grace under pressure.

Later on in her press conference, Williams called out the racist and sexist behavior inherent in the sport, saying:

“I’m here fighting for women’s rights and for women’s equality and for all kinds of stuff. For me to say ‘thief’ and for him to take a game, it made me feel like it was a sexist remark. He’s never taken a game from a man because they said ‘thief.’ For me it blows my mind, but I’m going to continue to fight for women and to fight for us to have equal coordination — to be able to take our shirt off on the court without getting a fine. This is outrageous.