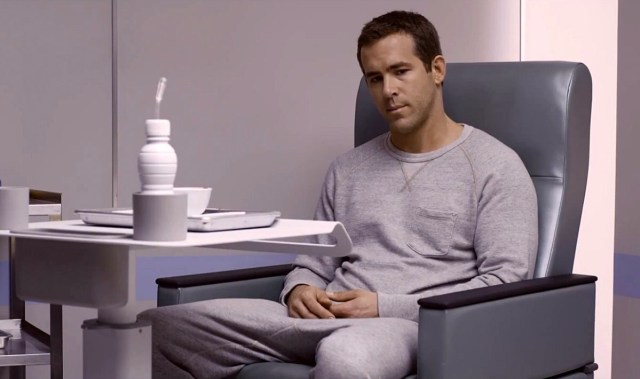 The latest body-wwitching film is repetitive and uninspired.

I did not see Ryan Reynolds movie The Switch. I heard nothing good about it, and it seemed odd to cast two actors that look VERY similar for a body switch. Well, maybe Reynolds really, really likes the body-switching subgenre, because he’s in another: this time a sci-fi, face-off kind of movie called Self/less (a not so subtle play on the movie’s major theme). And I will say, I’ve never gotten Ben Kingsley and Reynolds confused. In fact, there aren’t a lot of problems exactly with this movie. Despite being 2 hours long, it moves along at a good pace, it doesn’t completely brush aside moral-ethical questions, and it looks pretty good. It’s just a ho-hum take on a story we have heard many times before, from films with far more conviction than this film.

Honestly, this movie reminded me of several recent films from just this year, including Chappie and especially Advantageous (much better take on a similar topic). But it also borrows from films such as The Island, Face-off, Pet Sematary, and more than a few Twilight Zone episodes (especially “The Trade-ins”). But the film seems to borrow most from a 1966 John Frankenheimer film called Seconds, which starred Rock Hudson (who in his day had the same everyman/he-man quality as Reynolds). Put all those movies together, and you have Self/less, which appropriately feels pieced together from other parts without its own self. It’s a sci-fi film about parental regret, the morality of choosing your own life over another, and a big action film (some good, but a lot somewhat generic). The film is directed by Tarsem Singh, a director with a rare visual eye, but struggles with storytelling and narrative. His other efforts like The Fall, The Cell, Immortals, and Mirror Mirror all have a rich look, but fall apart when the storytelling becomes fragmented.

For whatever reason, this film is the least visually interesting of any of his work. It’s more reserved, and though set in a sci-fi world, seems very much to be set in the present-day, real world. There is none of the otherness his films usually evoke…well, almost none. There is a farm house which seems to come from the ’50s, a Trump-like gold apartment, and lab in a massive storage facility, all of which are pretty cool looking … although nothing as evocative as the visuals from his other films. Most of the film seems to exist in the here-and-now. Not what I go see a Tarsem Singh movie for, especially after seeing other “present day” sci-fi films this year, such as Ex Machina, which created that “otherness” in the real world. Singh usually has a stronger directorial hand, which for better or worse, gives the film a specific POV.

Part of the problem is the fact that the movie (written by Spanish brothers Alex and David Pastor), while not a very original, is muddled and requires Singh to be bogged down with exposition. Simplifying the story … perhaps not having the mystery/thriller/action aspects, and looking closer at the themes of identity and morality would have allowed him to play with the visuals a bit more … and tied them to the character’s arc. 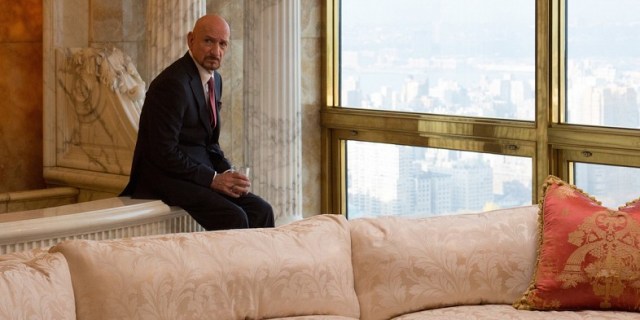 What’s the story? Well, Damian (Ben Kingsley) is dying of cancer and wants to go through a body switch with what he thinks is a corpse grown in a lab. Really, the body was another person, killed by the mysterious company headed by Matthew Goode. Reynolds, the new Damian who now goes by Eddie, starts rejecting the body and flashing back to his old body’s wife and family.

Now, a few things get very confusing, and are worthy of a spoiler warning. Mark, Reynolds’ original body, sold his body to Goode’s character and gave his wife the money so their daughter could have medical treatment. She clearly received a check … why didn’t she question where it came from then? Why is Damian a visionary mind the world can’t afford to lose? He is clearly modeled after Donald Trump and similar property men and investors, and doesn’t seem to create or conceive of anything. And most importantly, if you are selling this procedure, why not tell potential clients, “Hey, I was in a wheel chair and dying of an illness before I became a specimen like Matthew Goode”? That would sell a lot of people on this procedure. 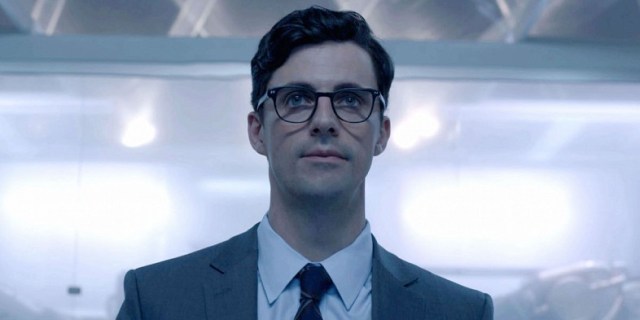 As for Goode … He is a favorite of mine. I’m delighted he’s joining Downton Abbey this season; he was great on The Good Wife this year. And now I know he could definitely play a Bond villain, because that’s what he’s been asked to do here. He sells a lot of what he says by sheer willpower. But a lot of what he says makes very little sense when you piece it together. And sometimes, he seemed to tip his hat to the reveal way to early—literally the first scene I knew pretty much everything about his character’s twist.

Reynolds can act (he was really good in The Voices this year), but he also seemed confused about how to play the role of a guy pretending to be a guy, who has been reborn, and then pretending to be the original guy. It would be hard for most actors to pull off, and he usually doesn’t make the difference clear based on his acting choices. When being a sincere nice person, with Mark’s family or seeing Damian’s daughter, he seems relaxed and happy … nice but not really playing the harsh, cut-off Damian we met. In fact the only time I sensed “this is Damian coming through” are his scenes with Victor Garber. Garber arguably has the only emotional arc in the movie I was interested in (and cut off way too early), and his scenes with Reynolds genuinely work. His scenes with Kingsley … not so much.

Kinglsey is an amazing actor. He played Gandhi and Logan in Sexy Beast (and a drunk assassin in the underrated comedy You Kill Me). But who told him to use an Al Pacino accent in this movie? Character-wise, it makes no sense, it doesn’t pay off or give Reynolds something to play, and suggests the character is some kind of crime boss that he clearly isn’t. It’s so odd people were laughing in the screening when he spoke. Even Garber seemed thrown off when he spoke, destroying any chance of establishing that intimate friendship the movie needs.

The problem is, Kingsley’s Damian isn’t a good enough a person for us to want him to have this procedure or bad enough for us to enjoy watching his corruption and fear what he will do with this new kind of power. And Reynolds doesn’t evoke enough of Kingsley’s performance maintain that sense that “he’s the same guy” we need. They seem like two different characters, and Reynolds too often plays him like a typical movie hero. He is never conflicted over what he’s done … because he is unaware of the details and moral implications for more than half the film. The trailer has given the truth away, but as soon as Reynolds learns everything, he seems to know and make all right choices. A sci-fi movie like this, which is light on the science, needs to play with and debate the moral and ethical choices … dig deep and ask the audience tough questions. This movie knows all the answers before they are asked, and too often goes for action scenes and shoot-em-ups, which aren’t interesting enough to distract you from what the film is side stepping.

But, I don’t hate this movie, and it is often an easy watch … it’s just no better than the films that inspired it. If you’re going to make a movie this similar in concept to other movies and stories, it needs to be executed brilliantly or have something new and original to say about its issues that haven’t been touched on before. This movie has none of those things, making it feel like nothing a pale imitation of better film, and fails to strike the emotional or intellectual chord of its predecessors.