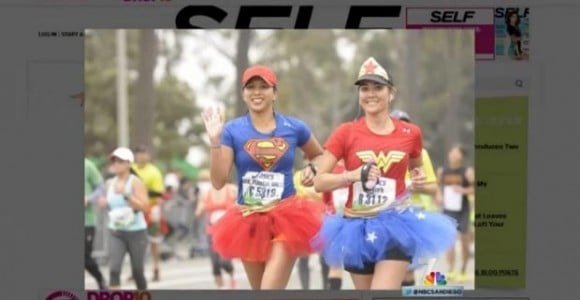 Marathon runner Monika Allen was overjoyed to find out SELF magazine wanted to use an image of her from a recent race. After all, it would help get attention for her sale of tutus, the proceeds of which go to Girls on the Run, a charity aimed at promoting exercise and confidence for young girls. But then the magazine was published and she realized the clipping featuring her likeness wasn’t a positive mention at all.

NBC News in San Diego reported on the ugly story and spoke with Allen who told them she was “stunned and offended.”

“Monika Allen says she was excited to receive an email from SELF magazine asking for permission to use a photo that showed her running the LA marathon dressed as Wonder Woman and wearing a tutu in an upcoming issue,” they write. “Her company Glam Runner makes them and donates the money to Girls on the Run, a charity that sponsors exercise and confidence-building programs for young girls. She said she’s raised about $5,600 for the nonprofit by making about 2,000 tutus over the past three years.”

Allen told NBC, “I feel like we were misled in providing the picture. Had I known how the picture was going to be used, I wouldn’t have wanted to send it.”

The caption which went along with the image Allen gave them permission to use was:

“A racing tutu epidemic has struck NYC’s Central Park, and it’s all because people think these froufrou skirts make you run faster. Now, if you told us they made people run from you faster, maybe we would believe it.”

To make matters worse, the marathon the picture was taken at was during the middle of chemotherapy for Allen’s brain cancer. She was wearing the outfit, says NBC, because it gave her motivation.

Allen emailed the magazine last week and at the time of NBC’s publishing, had received no reply. SELF, however, did give a statement to NBC.

In a statement to NBC 7, SELF apologized “for the association of her picture in any way other than to support her efforts to be healthy.”

“Of course if tutus make you run with a smile on your face or with a sense of purpose or community, then they are indeed worth wearing, for any race,” the statement read.

SELF’s editor in chief, Lucy Danziger, has since apologized for the terrible misstep. “I am personally mortified,” she told USA TODAY. “I had no idea that Monika had been through cancer. It was an error. It was a stupid mistake. We shouldn’t have run the item.”

Danziger also told them she’d reach out to Allen personally, as well as support Glam Runner but how about a promise not to make fun of how people look in general? Yeah, probably not.

[EDIT: We’ve been informed Danziger conducted an interview with SELF for their website. It includes, “The item should never have run, and we have since decided to discontinue the page. You will not see it after the May issue of SELF.”